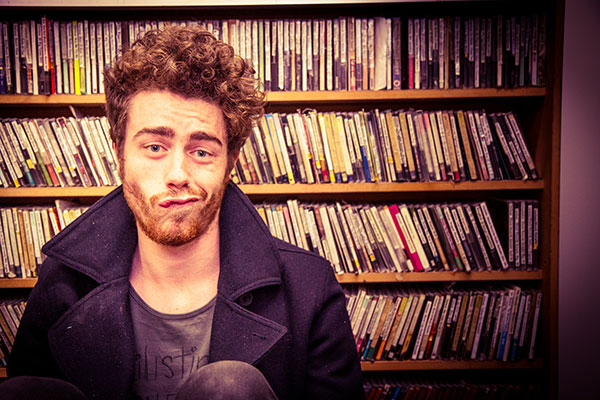 The lead singer and guitarist of Dunedin band Two Cartoons, Isaac McFarlane is preparing to head off to London for a record label-sponsored soujourn. Loulou Callister-Baker caught up with Isaac after his final Dunedin show to ask about the big move and how he got into music.

Let’s start from the start.
Well, I’m not sure whether I was planned or not …

When did you first start playing music?
I was a very intense football player from the age of six. When I was twelve I got Osgood-Schlatter syndrome, which is a problem if you’re playing a contact sport. For a whole year I couldn’t play football, which was excruciating. A month later, my primary school teacher rang my Mum. She told her that I had to find a new hobby because I was distracting the classmates. I thought, “oh well, I’ll just play guitar.” I had about six months of guitar lessons but I got sick of learning “A Horse With No Name” and all that shit, and from then I taught myself.

How did you teach yourself?
Guitar tabs and by ear. I learn everything by listening and watching. I have absolutely no idea what I am doing.

Does that ever become a problem?
It’s never been a problem that can’t be overcome, but it creates funny situations when other musicians talk to me about what I am doing, or if I’m learning a song with someone.

How did Two Cartoons form?
Before Two Cartoons, I was in cover bands from the ages of 13 to 15. In year 12 my band came down from Timaru to Dunedin to play in Rockquest, and we got second in the regional finals and third in the national final – we were the first Timaru band to make it to the top six. In year 13 we started a completely different band called These Dancing Wolves and we got to the national finals again – that was probably the best band I’ve been involved in. It was very alternative and creatively fulfilling. When you’re making alternative music you … feel better about the music you’re making, but with pop music you receive more satisfaction from the crowd.

Did you think that you and Brad [the other half of Two Cartoons] could be a band when you spent the day jamming together before Big Day Out a couple of years ago?
Not at all. We literally went into his garage to try and rip off Wavves and Best Coast as much as we could for a whole day, then feel good about ourselves. For six months we forgot we’d done that, but then there was Battle of the Bands and we erroneously thought that there’d be free beer (not that I drink anyway) so we entered for fun. We sucked … really badly. It took us a long time not to suck.

It’s a very different process playing in a band with only two people – if one of you isn’t in time that’s 50 per cent of the band not working – but we didn’t realise that for a long time. We would have never played another gig after Battle of the Bands except a guy called Joe thought we were cool and asked to manage us. Our first show was opening for Alizarin Lizard.

Were you better by then?
No. The first show we probably ever sounded good for was when we opened for Opossum. Part of that was because that night we split our guitar signal through both a bass amp and a guitar amp on the other side of the stage, so we had the bass tones coming out and onstage sound was better.

Do you have to have a good connection with Brad to play well?
Yeah. You have to be perfectly in tune with each other and listening to what [the] other does. It’s the Ian Malcolm Jurassic Park theory – the little things spiral and spiral into big problems.

Did becoming a popular Dunedin band change your personality?
No. I don’t think I’m in a popular Dunedin band. First, that’s hard to quantify, and also I’d hate to think that I was a person who thought about popularity. If anything, I get more self-conscious about being in Two Cartoons. Being in a band and the reception of that can become so personal because of the cult of celebrity – it’s hard for people to differentiate between the music and the people who are making it. I really don’t like that. It’s scary to think that because people don’t like our music they don’t like us.

Has this happened?
We haven’t been the most popular people. It’s just like primary school – not in a derogatory way, but people talk. We started off purposely making sillier music and everyone was okay with that but then we got $10,000 for Better Coast from the government and we were the first Dunedin band to get this grant. No one in Dunedin had heard of us, and other bands had been applying.

This elevated us from a funny band who people kind of ignored to a “fuck those guys” band. It was sad for me because I am a massive idoliser. I love so many bands in the Dunedin music scene, [so] to be so quickly on the out and still feel this way is difficult. Striving for acceptance is really important to me.

From other musicians?
Yeah – I mean that’s all that really matters, isn’t it? At this point, a computer can make a song, put Miley Cyrus’ face on it, and … make a lot of money. Therefore, money doesn’t matter – it’s not a signifier of success. Awards and award ceremonies are usually vapid things voted on by people have nothing to do with it really, so they’re meaningless.

Taste is so subjective, so you can be happy with the fans in the crowd that like your music, [and] because there are so many people and taste varies so much, there’ll always be someone who likes your music. As satisfying as that is, that’s not the best signifier of success for a musician. For me, the way I define my success is for the musicians who I respect to enjoy my music.

Earlier this year you went to Thailand to record an album. How were you able to do this?
Basically, we got lucky. A series of very fortunate events resulted in us being signed by a newly created and very innovative record company called Far South Records. I don’t actually like talking about it – I feel self-conscious. It’s the same kind of terrifying situation as receiving the grant for Better Coast. But, anyway, one of the main shareholders of Far South Records owns a music studio in Thailand. They wanted us to record an album at a proper studio, which meant we could go to Auckland, Australia or Thailand. The expenses for Auckland and Australia were going to be only a little bit less than going to Thailand (where we could meet this shareholder) so we went to Thailand.

Surely this kind of support doesn’t make you feel ostracised from the music community?
I’m not sure. The relationship between us and the people at the recording studio isn’t completely built on an artistic endeavour. This is a lot of it, but at the base of this relationship – no matter how amazing or friendly or jovial it is (which it absolutely is for us) – is a financial endeavour for everyone involved. You will never hear of a record label and a band losing a lot of money but still working together because they get along well.

There’s this great quote from Yannis (the lead singer from Foals) when he was being interviewed about their latest album Holy Fire. He talks about the idea that he thinks every band has a bullet with their name on it coming towards them, and part of the game of being in a band is how long you can avoid that bullet before it gets you. That bullet gets every band at some stage. Getting over the hurdles we faced with recording – to me – got us away from the bullet … or closer towards a bullet coming straight at my face!

What blew your mind about recording in the studio in Thailand?
I’m a person who doesn’t get my mind blown by things; rather I place a lot of importance and enjoyment in people and human connections. Obviously I enjoyed the experience – I’m a human – but the trip was very strange.

When we first arrived at the studio it was pretty crazy. Knowing that some of my favourite bands had recorded there – like Enter Shikari and Bullet for My Valentine – and seeing their personalities and fingerprints around the area was pretty impressive. But we were there to do a job; we weren’t there for a holiday. Everyday we worked from 9am until midnight and we had one day off.

Fast forward now; tell me about moving to London in November!
The record label is based in London, so for us to move forward with this album we have to organise this in person. Plus, it’s being aimed at the UK market, so we need to be there – it’s hard to be a successful UK band living in New Zealand. The record label initiated this, which means they’ll help us out a lot when we get there which is great for us. Again, it feels like we’re being spoiled for no reason. Charity is something I’m not comfortable with when it’s directed towards me. I don’t bemoan it, but it does make me work harder so I don’t disappoint.

Is there a chance that it won’t work out and you’ll have to return home?
There’s an overwhelming chance that it’s not going to work out.

Will you finish your degree this semester?
No, I’m leaving without anything. If a record label comes to me and says “we’re signing you as a band, go to Thailand, record an album, then we’ll send you to London to live, sort you out with everything and release an album for you,” am I going to sit there and be like, “naaah, I think I’ll stay in Dunedin and finish a BA”? No sane person – when this is your dream – would say that. You have to do it. I’m very nervous about it but it’s something I never thought I’d get to do. I thought I’d be living in Dunedin and touring New Zealand for the rest of my life.

Would you mind that?
No. But as the years go on, if you don’t reach a certain level of success your career starts to rely on other things, like having other jobs to support your addiction to music. I gardened at Victoria University for a whole summer – I was getting up at 5:45am everyday to start work at 7am and finishing at 3 or 4pm. I’d get home and I couldn’t be creative, I couldn’t make music, I couldn’t do anything.

The musician Tono has this really great idea that finding the best job is finding the best balance between giving up this many hours of your life to give you enough money to do what you want with this many hours of your life. To find happiness you have to find the balance between this.
This article first appeared in Issue 24, 2013.
Posted 1:47pm Sunday 22nd September 2013 by Loulou Callister-Baker.