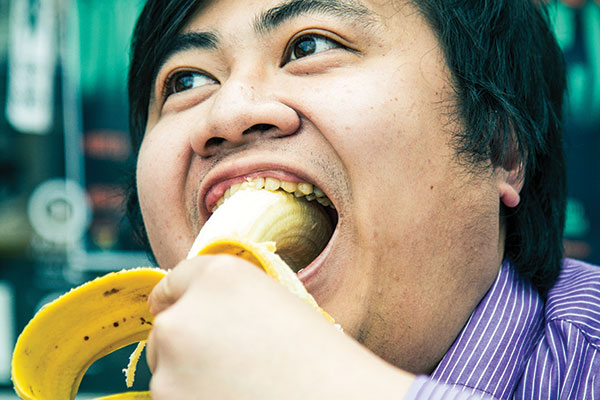 OUSA President Francisco Hernandez will soon leave the association after three years on the Executive. In that time he has revolutionised student politics, producing groundbreaking campaign videos (“Frangnam Style”), conducting “ironically terrible” interviews on national television (TV3’s Firstline), and pioneering sharp new fashion trends (trousers tucked into socks). Critic editor Sam McChesney caught up with Fran for one last, emotional interview. Beforehand, Fran promised that he would “stock up on tissues. For the tears that is.”

Fran: It’s not the end of an era. I think you can just see me as a continuation of the Logan Edgar era, because I was a Scarfie like him.

No, I’m kidding. I’m quite different from Logan.

In every way. I’m the complete fucking opposite. He’s white, I’m brown. He was a Scarfie, I’m a nerd.

So you’re about to start your lame-duck period. Any big plans?

What would you say is your greatest achievement as president?

That’s like asking me who my favourite son is.

You don’t have any sons. Are you saying you have no achievements?

It’s a metaphor. My children are the taonga that I pass on to the next generation. You know?

Yeah, grooming the next generation of leadership. That was all planned.

I dunno, I think my biggest achievement was probably the Memorandum of Understanding with the Dunedin City Council. That’s the first such agreement between a students’ association and a local body. There isn’t anything like that anywhere else in the world, and I was the first to get it done. Second biggest achievement is probably the tertiary student bus discount. People have been trying to do that for ages; I’m the one who got it done. Cheap food on campus, people have been whining about it for ages. Mine was the Exec that got it done. I think overall my Exec has been quite progressive and visionary about getting stuff done, whereas other people just piss and moan and complain about it.

What was your biggest fuck-up this year?

Probably the governance review. I fucking hated that. Governance reviews are like the graveyard of student politicians. … They’re useful, and they tell you some important things, but the process of actually doing is extremely painful. It’s like getting circumcised without anaesthesia, and I’ve done that, so I know. I actually have, and it’s a similar sort of … you can’t see what’s going on, you know it’s painful, and you’re supposed to have drugs to keep you sedated but it’s not working properly.

This is making me really uncomfortable, so let’s move on to the next question. How many OUSA sex scandals have there been under your watch?

None. I haven’t had sex while I’ve been President. I can’t think of anyone who’s had sex this year. With each other, that is. On the Executive.

Who is the most interesting person to insult you this year and what did they say about you?

There was that guy who called me “Hitler” Hernandez earlier in the year because he couldn’t buy a ticket to Netsky. Okay, officially not allowing people to buy tickets to a popular Belgian act is like committing genocide against six million Jews.

OUSA election stock has been hitting the top of iPredict’s most-traded list. How would you rank this in the canon of great OUSA moments?

It’s probably the best thing that’s ever happened – after all the things that I’ve done. It’s given us profile all over the country, and it’s given us the chance to engage in rampant insider speculation. Why do you think I do all those Facebook posts, Sam? Because I’m bored? No, it’s because I have stocks on iPredict. Every time I do one of those posts the market moves in the direction I want it to move. I don’t just do it because I’m bored, I do it because I’m getting money out of it. Who do you think asked iPredict to put those stocks there? Why do you think that person asked for those stocks to be placed there?

This is all on the record.

I’m taking the piss, by the way. That’s also on the record, so you have to print that.

Interviews can be abridged. How long do you think it will be until you end up on the back bench of a Labour opposition?

Well, I think you have to consider the fact that I’m focused on serving my constituents. I don’t have any other plans other than to be a good councillor if I do get elected, or be a good NZUSA president if I get that job, or be a good priest I become a priest.

I’m not the sort of person who, like, goes along with a plan, you know, just wanting to be a backbench MP. It’s not like that; I just want to serve the people. I’m not just using the positions I’ve gained as some sort of ladder to advance myself. That would be wrong. But by 2020 would be my guess, if I were that sort of person. Which I’m not.

I’d probably shag Ryan. I’d shoot Zac. I’d marry Logan, because Logan and I have a constructive partnership. I’m most familiar with him and I understand him the most as a person. Ryan is probably the most attractive out of all of them. I’m not gay, but objectively speaking, he is the most attractive out of the three of them. And I’d shoot Zac because I have iPredict stock and I’m betting against him, so if he dies that stock gets voided and Ruby gets elected. It’s nothing personal, it’s just money.
This article first appeared in Issue 26, 2013.
Posted 4:26pm Sunday 6th October 2013 by Sam McChesney.