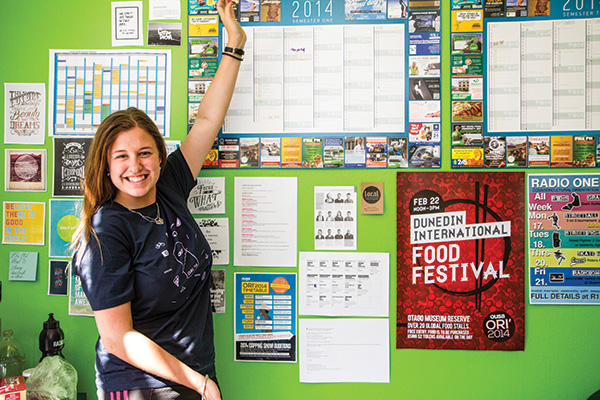 After winning by a significant margin in last year’s election, 2014 sees Ruby Sycamore-Smith going into her second year on the OUSA Executive as President. She caught up with Zane Pocock during a brief lull in a jam-packed Orientation schedule to discuss students, politics, and just a little bit of sex.

What are your priorities as President this year?
My number one priority is providing the ultimate student experience. I’m focusing this year on trying to communicate with as many students as I can and make sure they know about OUSA, what we can do for them, and how we can help them in their educational career.

To that end, how are you different from past Presidents?
I’m not Asian or male, and I’m not from the South Island, either. I would like to think that I am different because I want to really uplift and support the clubs; I think that’s a great way for students to get involved in OUSA. University is a really important time for you as a young person to really grow and become the type of adult that you want to be. By providing more leadership, I think we’re equipping students with lifelong skills that they’re going to be using forever.

Well, in terms of politics – even if you’re not as politically invested as Fran – what are the biggest issues currently facing students?
Student loans and allowances, and one that I hold quite close to my heart is focusing on internships for students. I think that it’s really important for students to realise that they have different avenues that they can start investigating into. And businesses, too, can give back to the community by providing internships for students; once you get students into the business, they’re going to be loyal and stay there. I think this kind of approach is what New Zealand is missing at the moment. There’s no real loyalty shown towards students. As a society, we’re doing just enough, but I think we could definitely do a lot more. We’re the future leaders.

And in a wider political view, how do you envision tackling the upcoming election?
Number one is to make sure that students just get out there and vote. I really want to see a huge pull in the numbers; I think we need to focus on how we make elections exciting. At the moment, everyone seems to have the mindset that “because I’m studying right now, what the government is doing doesn’t relate to me; it doesn’t have any importance.” We need to change that mindset. We only get an election every three years; this is our one chance to really make a change, and to really see the New Zealand that we want by making sure that we’re involved. Education is key!

Well, education’s what we’re here for. Complete change of tack: what’s been your highlight of Orientation?
I met a Highlander. I told him he was really beautiful!

Oh, what was his name?
He was really cool and we just bonded! He was really excited about Six60 – that’s the highlight of his O-Week – but nah, for me, it’s just really exciting to see the students enjoying it. I think that’s such an amazing foot for OUSA to stand on, just getting the students excited, because it is the students’ association and I just want to make sure that they’re happy all the time.

Thinking realistically, how many scandals will there be on your watch?
Zero!

There’s going to be no sex in the President’s office! That’s something that’s also going to be different.

That’s not really a change! Anyway, shoot, shag or marry: Ryan, Nali and Nick?
[Laughs manically] Oh my God, I don’t want to do this!

I’d marry Nali, because that’s legal now. I’d root Ryan because he’s the only straight one, then shoot myself and let Nali and Nick live on!

I feel like whatever I pick, they’ll be upset. I’ll fuck them all and then I’ll kill them all!

I like that you skipped marriage – I’m not sure if polygamy has technically been legalised.
I do like to have a bit of every cake, you know? Maybe I would kill Ryan because he’s been in Thailand all this time …

From Thailand?
[Laughs] Alright, and then I think I’d fuck Nick to see if I could change him.

The issue is that I’m not star compatible with any of them, which is why I really need to weigh up the pros and cons.