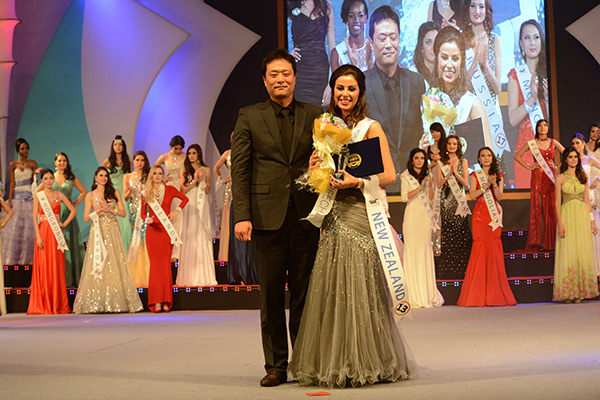 Deborah Lambie is a stereotype-smasher. She’s a medical student here at Otago, a beauty queen, and an award-winning speaker. Josie Adams sat down to talk to her about the jet-setting life of a pageant pro: talents, inner beauty, and demilitarised zones.

Why did you enter Miss New Zealand?
I just thought it would be really fun. Something new and challenging. I really enjoyed Miss Otago, so I thought, “why not?” You had to send in photos of yourself, and I already had photos because I’m with Aliana [of the Ali McD modelling agency]. Why not send them in?

Are you still modelling?
A little bit! Last year I did all pageants, so I’m not sure whether I’ll do different pageants now, or … I’m not sure what I’m going to do now. I’d definitely like to keep modelling; it’s so much fun, just in a different way to pageants.

How is it different?
Modelling is about showcasing a designer’s work, whereas pageants are more about your personality and how you relate to people. It’s just a different job, really! Modelling’s about the clothes and being a coat hanger, but this is about letting your personality shine.

That’s really interesting, because I guess a lot of people view pageants as being old or overly traditional. That’s cool that it could be more empowering than modelling.
It can be. I found for me it really helped my confidence. Modelling did a little bit, but then this has a lot. It’s such a cool thing to represent your country and go overseas, so that’s been a really big boost for me. It was something I never thought I could do.

Where did you go?
The top 20 finalists from Miss New Zealand went to Thailand for two weeks, and that was awesome. We got to watch elephant polo, ride elephants, ride horses on the beach … we got to stay at the most amazing hotels, the nicest in Bangkok. We had meals out, did a really cool photo shoot on the beach and went swimming.

For Miss World University in South Korea we stayed in Seoul; I wasn’t prepared for how cold it was! It was something like negative fifteen degrees! I’d got back from a trip to China and it was cold there, but nothing like Korea. Some girls wore pantyhose and open-toe shoes, and sometimes even bare legs, I don’t know how they survived! We went ice-fishing and four-wheeling on the frozen lakes. We also stayed in Hwacheon, which is the closest town to the border between North and South Korea. We went to the demilitarised zone, which was crazy, and actually really sad. I knew a little bit about the situation, but I didn’t realise how bad it was. Each girl got buddied with a soldier: all men in Korea are conscripted from the age of 18 for a year and a half, so we got to talk to them about it, and how they felt about the war.

What was the general sense you got?
That they really don’t want to be at war with North Korea, and that they want a peaceful resolution. There are obviously lots of barriers to that happening.
I didn’t realise there were so many world competitions.
Neither! It’s a whole industry! Even in New Zealand – and I’m still learning about all this, too – there’s Miss Universe New Zealand, Miss University New Zealand, Miss World New Zealand …

What was yours?
In Miss World University the talent section is just for fun, and doesn’t count toward your overall score. I decided not to do one – I thought it was better to sit it out than to do something average! What could I do? Is anyone sick in the audience? There were 40 contestants, and maybe 15 didn’t do the talent section.

What kind of talents did they have?
Mostly dancing. Dancing’s good if you’re a dancer, you know? If you’re not a dancer … not so good. One girl sung and she actually won the talent competition. [whispers] She was terrible. She was such a nice girl, but even she was really surprised when she won! Maybe the judges thought it was traditional.

What’s the weirdest talent you saw?
Three girls did belly dancing, which was really cool. Miss Zimbabwe did an acting skit! She’s a comedian, so her’s was hilarious! It was cool, and it stood out. Miss Canada did martial arts!

Which was your favourite of all the different pageants?
Probably Miss University, because I didn’t have any expectations. I was so happy to even be there. I wasn’t worried if I won or not, and then I did end up winning the award for best speaker, which was really cool. That’s the nicest way to be: if you’re super stoked just to be there and then you end up doing well, then it’s such a bonus.

Lots of the girls were really competitive, but if there’s only one girl who can win, there is a good chance you will end up disappointed. After the final lots of girls were really gutted, which I thought was a shame. I thought, just chill, because you’re awesome. You got here.

What was your speech on?
We all had to do three three-minute speeches: one on ourselves, for the judges; then there was an international forum on the environment; and then another one on peace. They collate your scores from all of them.

Were you worried about your accent?
I should have been! You always think you don’t have an accent, but I definitely do! But English is my first language, and I spoke slowly, so I think
the judges didn’t have too much of a hard job understanding me. Some of the girls whose English wasn’t very good were at a bit of a disadvantage.

Do you think it’s unfair that it was in English?
It would have been better if there were translators for the girls who didn’t speak English. It shouldn’t be about what language you speak. Nevertheless, the girl who won was from Mexico and could speak virtually zero English; it obviously didn’t matter too much. 1st was Mexico, 2nd was Zimbabwe, and 3rd was Brazil.

What would your number one tip be for anyone entering Miss Otago?
Have fun, be yourself and don’t worry about losing too much weight! Your natural body size is what you look best at. That’s what I really noticed when I was over there [in South Korea]. There were girls that were so much skinnier than me; but being that skinny wouldn’t look good on me. There were girls that were much curvier, and that wouldn’t look good on me either. So yeah, just be happy with your own body!

That’s such good advice to hear in a beauty competition!
I genuinely think it’s true! It’s not always easy to remember when you have to wear your bikini in front of lots of people, but I really think that it’s true. If you’re enjoying yourself and having a good time, then that’s when you’ll look the best.

Also, these are subjective competitions. Remember that it’s hard for the judges – in my opinion there’s no such thing as a best person, but they have to choose someone.

What are your final thoughts on all this?
I feel so lucky to have had all these opportunities! It’s so easy to do the dumb girl thing: “Oh, it was so awesome!” I’ve tried to be honest as well, but it was awesome!
This article first appeared in Issue 4, 2014.
Posted 3:19pm Monday 17th March 2014 by Josie Adams.