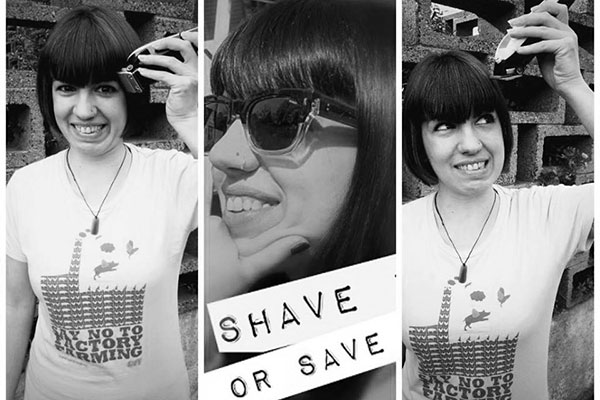 Sonja Urban is a German-born human and animal rights activist who became a New Zealand resident last year in order to study Environmental Organisation at Otago. Baz Macdonald spoke to her about her latest cause, Shave It or Save It, which aims to raise money for animal welfare by letting donors decide whether Sonja should shave her head or not.

What causes are you currently supporting?

The causes I support are KidsCan (child poverty) and SAFE (animal welfare).

What drives you to support them?

I chose the charities for different reasons. Why child poverty? Child poverty in New Zealand is a lot worse than I thought it would be. For a developed country like New Zealand it is actually really bad. Children need our help; if we do not start here where else? If the children of today get more chances they can be “better” adults. They cannot speak up for themselves just yet, so let’s help them. KidsCan does all sorts of things.

And why animals? Well, aren’t we all just animals? And we should take care of each other. We need each other to keep this planet running. There are thousands of homeless dogs out there that have to get put down because no one wants them, or [because] there are not enough resources to look after them. SAFE … cares about all animals, not only the ones we call pets.

What is the goal of your current endeavour, Shave It Or Save It?

My first goal is to raise a lot of money for the causes, and then I wish to make more people aware of the poverty and animal welfare issues. Many people do not know just how many children do have to live below the poverty line in New Zealand. I also want to raise the profile of SAFE in Dunedin, as they are doing really important work for animal rights.

What argument would you make to a meat eater to encourage them to engage in a vegetarian or vegan diet?

My reason for being vegan is to keep the harm on beings and the environment as low as possible. A meat eater could do so by eating less meat – for example having a meat-free day, or better still a week – which would change our farming industry from a heavy reliance on animal farming to more diverse multi-cropping practices.

Animal farming has a big impact on the environment and we could all do a little bit to reduce that. For example, it takes tonnes of crops and water to feed farmed animals – it takes up to 13 pounds of grain to produce just one pound of animal flesh and it requires between 5,000 and 20,000 litres of water to produce one kilogram of meat. So not only would you do good to the animals by eating less, or no, meat, but you would also reduce the impact on the planet.

Having grown up in Europe, how do you think NZ stands in terms of environmental and human welfare issues? Better or worse than European countries?

What is your next activist venture?

If people decide that I should shave my hair, I will write a blog afterwards on how people react towards me. I heard from many girls who have had a bald head that they got weird reactions from people. I want to show people how superficial their reactive behaviour can be and how painful it is for people whose baldness is due to health issues. I am also hoping to find some time to volunteer for SAFE.

How can people get involved in your causes or donate to Shave It Or Save It?

It is easy as to donate. If you think I should shave my hair, you put money in the “Shave it” account:

If you think I should keep my hair you pay your donations into the “Save it” account: