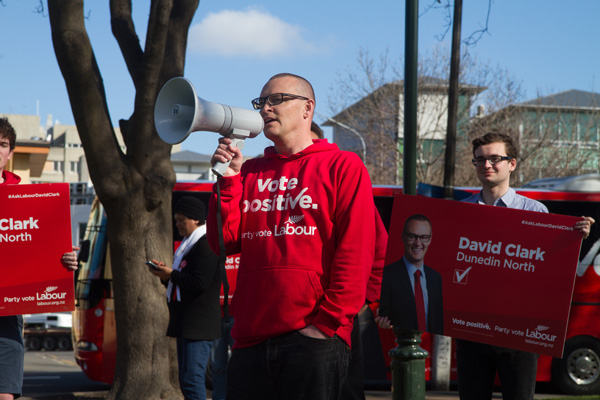 David Clark is probably one of the more familiar political faces around campus. He has an office right nearby, he’s our elected representative, and he’s vying to continue in his position. With experience in a number of student-related areas, including being Warden of Selwyn and taking a turn at Labour’s Associate Spokesperson for Tertiary Education, he’s pretty up to speed on what’s going on in the university sector.

Since you’ve been our MP now for three years, could you tell me a couple of things you’ve achieved for students that they might not know about?
Yes. I guess the first and obvious is things that my office do for students – dealing with problems with Studylink, making sure they get the money that they ought to have, dealing with 18+ cards (there are a hell of a lot of 18+ cards that go through my office every week), immigration issues, certification, some of that basic stuff. […]

Can you get an 18+ card from your office?
You can get it signed, yeah.

Oh you can get it signed, right.
There’s a Justice of the Peace in my office, so probably, proportionately, the hugest amount of stuff that happens is constituent work. […] I was the Associate Tertiary Spokesperson for a while as well, and I pushed for a full review of student support, which has become our policy. That would be the other thing that I would want to claim. And that comes out of my experience as Warden of Selwyn previously, and watching, over time, the affordability relative to the cost of living dropping for student accommodation and studying on campus. I believe that it is imperative that every person who has the talent should feel they are able to afford to go and study.

What about some things in the house?
In the house things I’ve done that are not necessarily quite so clear for students. Drawing attention (derivatively now) to the 0800 poison line closure that’s threatened, which is based out of Otago University; drawing attention to the Invermay issue, and being really clear that that’s going to be saved. Again, a lot of Otago graduates going into there, so that’s actually about the jobs that follow for university students. Also, pushing for a clear announcement, which has just come through over the past week, that Labour will commit to rebuilding Dunedin Hospital. Alongside the rumours of it being downgraded, [this] makes it clear that Labour’s committed to it being a teaching hospital in line with Otago University. Without that teaching hospital Dunedin’s future would be compromised, so those things I would consider the biggest gain in terms of parliamentary stuff.

Other stuff students might not know about and, again, it gets less and less directly relevant to students, but the Mondayising Bill […] means that students will have two more holidays every seven years that they can celebrate!

What else … Pushing Peter Dunne fairly briskly a couple of years ago to change his rhetoric from legitimate tax avoidance to tackling multinationals who avoid tax – I’m really proud of the public prodding I did to change the direction of government rhetoric … because for future New Zealand employment prospects it is imperative that we have companies in New Zealand that succeed. At the moment, our tax system is stacked against New Zealand companies, because responsible New Zealand corporates do pay tax and a lot of overseas corporates don’t. […]

David Cunliffe said to me the other day that whether or not Labour were changing anything about the current living costs/allowance scheme is a “matter for the review,” but what changes would you personally want and would push for?
I would want to see funding for student support increase. If one looks at data, and I’ve had this done by the parliamentary library, over time the real value of student support has dropped consistently […] the last 25-odd years. I would push for the real value of that funding to be increased. There’s a clear division between National governments and Labour-led governments on student support; the last Labour government put through nine budgets and there were nine increases in student support of one kind or another; the National government has had six budgets – the first five cut student support in one way or another, and the last one lowered the threshold in real terms for repayment of student loans, so basically there are pro-students and there are anti-students and the path is incredibly clear. Again, National introduced student loans, Labour introduced interest-free student loans. National introduced administration charges on top of those student loans when it couldn’t get away with re-introducing interest.

Labour introduced fees – well high fees.
Well, I think the picture is pretty clear which side is about making education accessible and which side isn’t. There are some fairly blunt and clear trends there.

How do you feel about the early repayment bonus [that National cut]? Cause that was pretty popular, or at least amongst the, like, four people I spoke to.
[…] Well that’s an incentive, I think the evidence was that it didn’t actually encourage people to repay faster, the evidence that I’ve looked at anyway. It made people feel better about it, because it meant they didn’t have to pay as much, but it tended to be people that already had that money and could afford it that took the bonus. […] Generally, over time, we want to make education more affordable across the board; we’ve got measures to extend to early childhood education, free early childhood education; we’ve got measures in this election to make school donations no longer necessary for low-decile schools, and boy are the lower decile schools happy to hear that, I can tell you, the principals want to give you a hug when you walk into the schools, because a lot of those schools are really struggling. We’re a party that believes in access to education, that that’s where the opportunities lie for exploring your talents and making the most of your opportunities.

There have been a whole host of changes made to tertiary education since Steven Joyce took over; what do you think have been the worst of these changes?
Some of the stupid ones. One of them is the 7 EFTS policy, which has meant that people who’ve done a previous degree and then studied medicine have got a good way through their degree (and the government has spent a possible couple-hundred-thousand on them; we as taxpayers have invested a couple-hundred-thousand in them) […] now they can’t finish their studies. That is obscene, it’s stupid, and I’ve had constituents come to me facing really dire situations. They’ve got dependent kids; they may have a previous qualification and they’re thinking about going back to doing what they did before, despite being on the cusp of becoming doctors because they just need to feed their families.

And that is just stupid, and that policy was announced on a day when Steven Joyce was looking for a distraction, because National was facing some bad publicity. When he was questioned about it in the select committee, shortly thereafter, it was clear he didn’t understand the implications of the policy. But they’ve refused to budge. […]

Other stupid things they’ve done include trying to change the government’s arrangements for universities, taking out the student voice and the staff voice. […] I think that if Steven Joyce wants to make some cuts to governance he should start with his own cabinet. If he thinks that 20 is an ineffective number for making sensible decisions, that’s where he should start, not with the universities. […]

What about after education? One of the big issues for students is that they graduate, and they have heaps of debt, and there aren’t too many mechanisms in place to help them gain jobs in education areas that may not be the most “jobby” of those.
We want to shift to a higher value economy; we think that New Zealand’s advantage should be more in the waitlist sector. We continue to turn out some of the best high school students in the world, despite being low down on the OECD rankings in terms of wealth these days. We turn out smart people whose wages are relatively low in world terms. And we have good universities. We ought to be at a comparative advantage, really, in world economy terms, and part of that shift is making sure that wages are decent so that employers are not focused on getting wealthy off the back of cheap labour and engaged in a race to the bottom in terms of productive outputs. That involves simple things like minimum wage rises [that are] sustainable over time […] They’ve done that in Australia and you’ve seen a shift to a higher value economy there.

The other things involve R&D tax credits, so you’ve actually got research and development incentivised, and making sure that we are properly funding universities and tertiary institutions. We’ve said we’ll retain the real value of that and that’s one of the significant announcements welcomed by Harlene Hayne; Labour’s commitment to maintaining the real funding has been welcomed by the New Zealand-Vice Chancellors’ Committee They don’t like to be too political, but I think the fact that they’ve come out in support of that policy says that universities are hurting, and knowing that there’s a commitment to funding the institutions properly is a real mark in Labour’s favour.

One last question. So we have this game called the Hunger Games, where I’m going to give you three people. You choose one of these people to be on your team, and the other two get to form a team against you, and obviously as in the Hunger Games, one team can win. These people are: Steven Joyce, Tracey Martin, and Hone Harawira.
Ah ha. And what, can you explain to me, being a bit ignorant, what kinds of games they’re going to play?

Oh have you not seen the Hunger Games?
I’ve not I’m afraid.

[…] Well, I mean, basically you’re going to be shoved in an imaginary arena, which we’ll say is a forest, and you choose one person who’s on your team. The other two people, somewhere, out there, also want to win this game. So you’ve got to consider things like survival instincts, ability to hunt… it’s quite intricate when you start thinking about it.
I actually think Hone Harawira’s got a survival instinct that’s pretty strong. So instinctively I’m drawn to being in a team with him. I don’t think I would trust Steven Joyce, so that shapes that response, and I do admire Tracey Martin, I think she’s a person of conscience, so it’s a line call, but I’ll probably go with Hone.