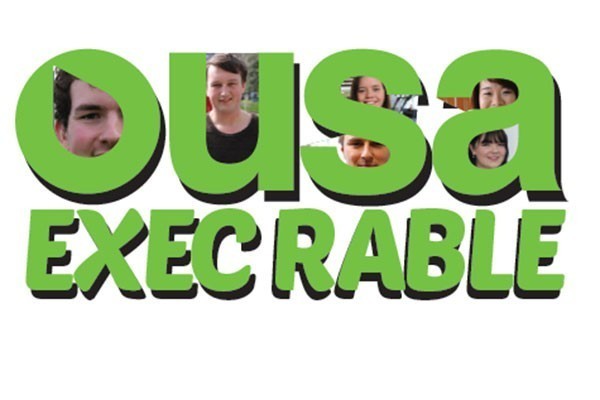 The week’s executive meeting began with OUSA finance officer Jesse Hall’s financial report for the academic year to date. Laura Harris concluded that the report was a “comprehensive overview” and Hall spoke of how it showed that OUSA are in a “solid financial position.”

A large proportion of the meeting was based around a series of constitutional changes the executive have proposed to streamline OUSA’s practices. As well as the more major changes were administrative amendments, such as changing ‘General Manager’ to ‘Chief Executive Officer’ and also deleting miscellaneous underscores and other grammatical errors.

One of the main constitutional changes is that of clause 35.1, which now outlines that executive elections must be held within a week of the previous year’s elections; this is in order to create certainty from year to year.

Acknowledgement was made to the publication of the OUSA’s 2015 Annual Report, which is written by the president at the end of each year to comment on the progress made, where less desirable outcomes occurred, and also talked about OUSA’s relationship with NZUSA, the University Book Shop’s problematic financial situation, as well as last year’s TV1 Sunday Segment that unfairly painted students in an unfavourable light.

The meeting then turned to OUSA’s Forum, which took place on 12pm last Wednesday, and included both the proposed constitutional changes and also the questions that will be put to students in the upcoming referendum, which will begin at 9 am, May 16 and close at 4pm on May 19.

Should the Otago University Students’ Association Annual Audited Financial Statements for the year ended 31 December 2015 be received and accepted? Y/N

Should the Otago University Students’ Association Annual Report for 2015 be received and accepted? Y/N

Should Pricewaterhouse Coopers be appointed as Auditors for the Otago University Students’ Association for 2016? Y/N

Should Anderson Lloyd be appointed as Honorary Solicitors for the Otago University Students’ Association for 2016? Y/N

Should OUSA regulate what costumes can be worn to the Hyde Street Party by prohibiting offensive costumes? Y/N

Should OUSA have a spa pool or communal bathing house? Y/N

Should OUSA lobby the University to make a commitment not to invest in fossil fuels? Y/N

Should OUSA initiate a campaign with the Dunedin City Council and University to have large glass rubbish bins (like yellow top bins) replace the current glass bins throughout North Dunedin and the student living vicinity to reduce the glass problem? Y/N