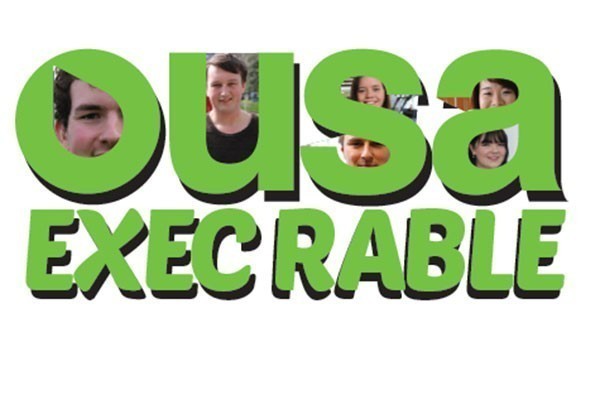 Not BFFs 4evz — not even kidding

The OUSA executive has suffered a major breakdown in communications according to Administrative-Vice President Jarred Griffiths.

Last week Mr Griffiths released a statement saying communication between himself and President Laura Harris have broken down, following ongoing rumours of an internal coup.

The statement addresses the recently developed division on the Executive saying the “internal culture lacks integrity and transparency”, with Executive members taking sides in support of either Harris or Griffiths. Griffiths says the conflict “stems from a range of personal issues” which, according to the statement, were unsuccessfully remedied by professional mediation earlier in the year.

“Laura and I have had a personal falling out and have struggled for several months to communicate with each other.  This breakdown in communication stems from a range of personal issues – which have unfortunately now been brought to the attention of OUSA staff, the entire OUSA Executive and University of Otago management. Despite attempting professional mediation, we have been unable to restore a professional working relationship,” reads the statement penned by Mr Griffiths.

“It has led to a culture being fuelled by rumours and half-truths. Our internal culture lacks integrity and transparency.  Closed door meetings, scheming and personal attacks have found a home within our Association. It isn’t acceptable.”

Mr Griffiths goes on to address developing rumours about a possible coup being led against Harris, which Mr Griffiths notes his false association with as contributing to the internal division within OUSA.

“Yet, it is on this basis that I find myself locked out of conversations and subjected to vicious rumours that attack my integrity – personally, and as OUSA’s Vice President.

“Last year I led a campaign alongside Laura to elect her President of the Association – I did this as her friend, and someone who thought that she was the best person for role.

“Although we are no longer friends, Laura has my full support as OUSA President. It is my primary function to support and assist her in the performance of her duties. I have been available to carry out this role for the past six months, and will continue to be available during the next six months as well.”

OUSA President Laura Harris has responded to statement saying she was disappointed the Administrative Vice-President had made the internal divide public, saying Mr Griffiths should have spoken to her directly.

“I have received the statement Jarred sent today to myself, the rest of the executive, Critic and some OUSA staff. I think it is very unfortunate that Jarred has chosen this avenue, rather than speaking to me directly to outline his concerns and ideas on how we move forward. I am very proud of the work all of my executive have done this year,” says Ms Harris.

“I believe we are making real progress and delivering good results to students. Jarred has my full support also, and I am confident our executive will continue to achieve great outcomes this year. My door is always open to Jarred, the rest of the executive, and importantly all students.”