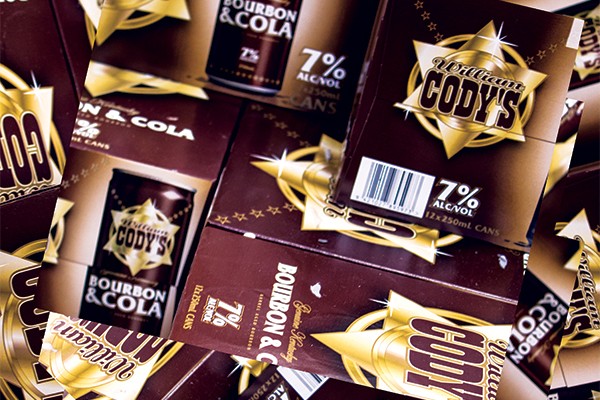 Cody’s Is A Court Case In A Can

Cody’s: the official drink of obnoxious 12 year-olds getting drunk in skate parks everywhere. This has been by far the most requested drink review.

These reviews are not just shit chat spun out of nowhere; they’re an intensive process. We start with a blind taste test to pick up the more delicate flavours. Then we drink an entire box to really immerse ourselves in the experience. And thirdly, we call on our nostalgia to provide that special ‘x factor’ which makes some drinks so special.

Visit any provincial town on a Friday night, and you will see old mate Cody being chucked back by hoards of youths as they do burnouts in their Nissan Skylines.

It tastes almost exactly the same as any other bourbon and coke, but despite this Cody’s has legions of fans who define their entire self-identity by these cans. Rural New Zealand loves these things more than John Deere and Richie McCaw combined.

I think Cody’s pair the sweetness of the cola and the kick of the bourbon in a more balanced way than Billy Mavs. The flavours accentuate each other, rather than fight for superiority. But, at the end of the day, you’re still basically drinking lolly water. Anyone who dares call Cruisers a ‘bitch drink’ while holding a box of these needs to be taught the meaning of the word ‘hypocrisy’.

These things do have a fucking grunt to them though. Easy to get down, and quick to fuck you up. You fall, unsuspecting, to a night of headbanging to Atlas and arguing about rugby league. I don’t even like rugby league, but after I have nine of these inside me I apparently have very strong opinions about the state of the Paramata Eels kicking game.

I find a Cody’s pairs excellently well with a cask of red goon, particularly the Banrock Station Merlot currently selling at Leith Liquor for a criminally cheap $10 a cask.

Tasting notes: Honey and oak, maybe a hint of blackcurrant

Pairs well with: Being angry and illiterate