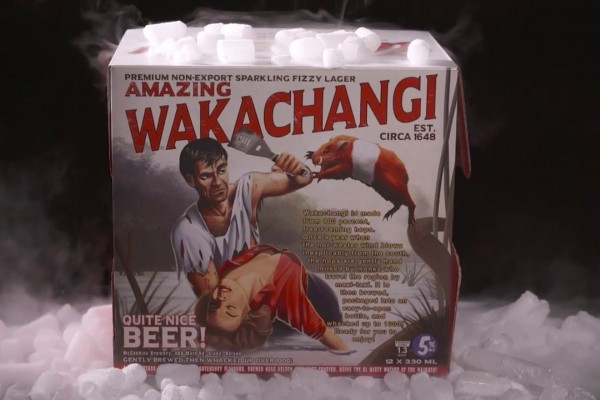 ‘Wakachangi’ is an amalgamation of the Māori word for canoe and the Georgian word for a 17th century Ottoman harp.

The brainchild of one of New Zealand’s greatest New Zealanders, Leigh Hart, this fresh drop goes down easier than the Blackcaps middle order against any somewhat competent bowling attack.

It’s easy to dismiss Wakachangi Lager as a generic beer in a fancy package with a celebrity endorsement attached to it. But it’s shockingly good. They could have spit out a clone of Speight’s or DB, but instead Changi sets itself apart as something genuinely beautiful. It’s a light lager that destroys your thirst better than Trent Boult destroys middle stump at Hagley Oval. The hops are minimal, but they do just enough to make things fun, like Kane Williamson’s bowling: not normally anything to get hard for, but occasionally orgasmic. Whether it was their intention or not, Wakachangi has become the perfect beer to drink on a sunny day at the cricket.

It's brewed at McCashins brewery in Nelson, which is the spiritual home of the entire Craft Beer revolution in New Zealand. These are the guys behind Mac’s, Stoke, and half the stuff Moa releases these days. They know how to boil up a good drop.

As we all know, due to science, it’s impossible to get drunk on 4% beer. The good folk behind Wakachangi know that of course, so they treated us with a delightful 5%. Your first box will level you up like a Grant Elliot six in the Cricket World Cup semi-final. A second box will leave you messier than the Blackcaps in the Final of that same World Cup.

Yeah, maybe I’m just sucking off this beer because I like Leigh Hart’s cricket commentary. That’s half the reason anyone drinks it. At $20 for 15 standards, it’s a quality deal and pretty yum. It’s almost identical to Speight’s Triple Hop Pilsner, but like a million dollars cheaper.

Pairs Well With: The Corey Anderson song, believing in the leave, Bhuja, and false hope in the future of New Zealand cricket.