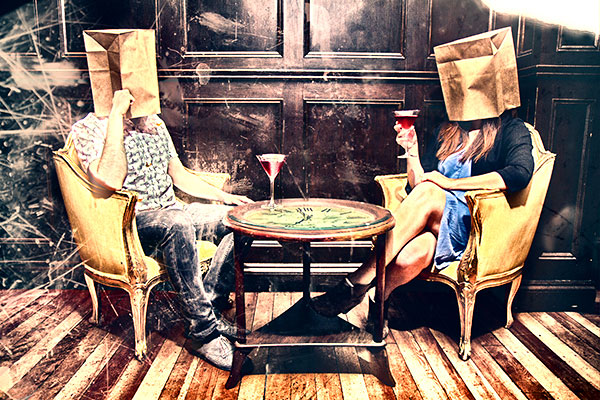 When I got the call that I was to be on the Critic blind date, I won’t lie, I was a little excited. So, naturally, I calmed my nerves in the finest of Dutch traditions: with six beers. I arrived a bit before her and nervously waited to see who would show up.

Once she showed up we introduced ourselves, sat down and started to look at the impressive drinks and food lists. I decided this would be a good time to try being smooth and asked the bartender to make two of whatever drinks he felt like making. This came back to bite me when he arrived with a coffee based cocktail, for me, and a fruit based cocktail, for her. I don’t drink coffee any more so I promptly lost all my hard earned “smooth points,” by shamefully asking if she would trade. In my defense, she didn’t seem to mind and I made up for it by buying her a few drinks later on. We ordered a massive platter of food (far too much for only the two of us) and started to get to know one another. The chat flowed really well – no awkward silences or weird questions – for the next two-and-a-bit hours, at which point the DJ started to play a bit loud for conversation. So I suggested we go cash in my free drinks at Alibi, which was much louder, so we finished our drinks quickly and promptly left to start the journey north. Unfortunately for the readers I have no juicy gossip to share; we parted ways near the Cook and went home, where I finished my pre-date beers and passed out on the couch in a state of drunken bliss.

The following day, my friends asked what she looked like/ if she was hot, so we had a wee stalk, using very few key words, and actually found her. Unfortunately, I forgot that when you view a profile on LinkedIn the person gets a notification … Definitely didn’t help my chances. Oh well, I don’t think it was going anywhere anyway.

Getting a text saying “do it,” followed by a call at 2pm on Thursday, was the start to my first blind dating experience. I followed precedent and had a few beverages to calm the nerves. I arrived at Di Lusso on time with high hopes that I was going to find my one true love … I was quickly brought back down to reality when I realised this guy was a whole new level of metro sexual, wearing one of those typical black cardigans from Glassons.

We started off with the stereotypical conversation: major; travel; hobbies; etc. The massive platter and cocktails arrived. He ended up not liking his espresso cocktail, so I switched with him so he had the pink cocktail.

Conversation was fine and I was pleasantly surprised when I asked him three fun facts about himself and they were actually quite interesting. However, I think he was trying too hard to impress, saying “f**k” about every 10th-20th word, either that or he just had an extremely limited vocabulary. Following this, he couldn’t wait to bring up his medical marijuana card that he “got from the States” (which he did not have for medical purposes). Later on, when he found out I wasn’t into drugs, he quickly reassured me that the card was just a joke.

We continued on to Alibi for another drink, where it was reaffirmed that there were no sparks between the two of us: when we stood up, it was funny finding out that, for a “six-foot-two” guy, he was shorter than me, a six-foot girl. When we parted ways, I made sure to stay a metre apart so that he wouldn’t try and hug me.
Thanks Di Lusso and Critic for the free feed!