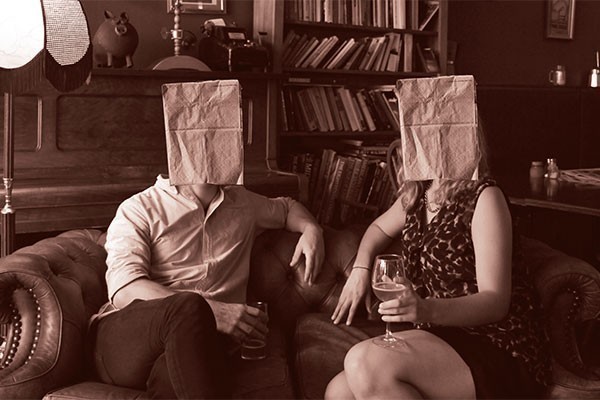 Having signed up for the Blind Date thinking it would be a great idea, I later realised I had set myself up for an absolute shitshow. The nerves started early but soon passed with the help of my flat mates getting as much alcohol in me as possible before dropping me off on my date.

I arrived fashionably late to see that I was in fact not, and had arrived before my date, so I sat down and waited nervously for him to arrive. Once he got there we began the typical conversation of what we studied, where we lived and so on. The lad was clearly pretty smashed already as he told me three times about how he went on an exchange, but we still managed to bond pretty well over our passion for alcohol.

We hooned our way through the $100 bar tab and got absolutely trollied, but still not quite trollied enough to accept his offer of a cheeky root in the bathroom. We then shared a taxi home which I had to pay for due to him claiming to have no money on him (whatever asshole) and parted ways.

Sorry nothing more exciting happened but I think he needs to learn to take a hint—no means no mate. Cheers to the Critic and the Dog With Two Tails for a night that my flat mates will never let me live down.

So the night started early with me grabbing my $6.50 Merlot from Gardens New world along with the classic slab of diesels that had been sitting round the flat. I walk in to find a few aged couples chewing the fat over some wines and also ‘Blue Dress’ who was to be my date for the night.

We started with the go-to get to know you questions and I came to the early conclusion that this is going to be pretty boring unless we got a lot more turnt. Having discovered that we had a $50 bar tab each, I nab myself another bottle of red wine and a few tequila shots. Fast-forward through some more shit chat until I find myself finger banging Blue Dress in the only bathroom in the bar. This proves to be a problem as after about 10 seconds of probably the dustiest gobbie a man could ever receive we get a knock on the door, which abruptly brings things to an end.

We decide to leave the bar. Due to the fact that I was about 20 standards deep and had only eaten a handful of curly fries since lunchtime, my memory decided to shut off the night. Although, that is not the end of the story.

Skip to the next morning where I wake up in a single bed with a little brunette fresher giving me the ol rub down. Although it wasn’t the worst way to wake up I impulsively say, “Where the fuck am I? And how did I get here? “ Answer: You are in Unicol and you came home with me last night. Accepting this fact we quickly get back to where we started. One thing led to another and she asked me to grab a condom from underneath the bed. I reach underneath and my hand locks onto an absolute spaceship of a dildo. It would have been rude not to give this thing a whirl, which definitely made the memory highlight reel for me.