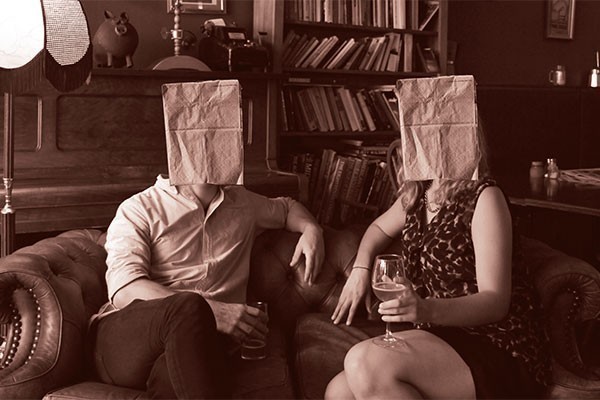 I strutted into Dog with two Tails bang on 6:30 with only one thought in mind: ending the driest of dry spells. Already chopped and with a box of Trojan XS’s in my back pocket I felt my chances were near 100 percent. Arriving at the venue I had a quick look around the bar to see if I could spot any lovely young ladies sitting by themselves in the same position as myself. Alas, I was out of luck and decided I would head to the bar instead.

After order a couple of malt whiskeys on the rocks, and dipping my fingers in the urine coated bowl of nuts on the bar I was suddenly confronted with the most beautiful woman, asking if I also was here for the Critic blind date. After almost choking on the bar snacks and managing to stutter a yes I was able to pick up my nuts and make our way to the table.

I tried to be chivalrous and pull her chair out for her… Only problem is that when I pulled the chair out, she decided to sit down. Which of course left her on the deck and me red faced and embarrassed. Not the greatest start to a date.

I won't lie… The date never really got started after that… We ordered the bottle of wine and in the aftermath of such embarrassment, I decided to neck majority of the bottle… Things got a little hazy afterwards and I'm pretty sure she left soon after, perhaps embarrassed for me.

All in all, not an overly bad night. Free booze, free feed and an insight into why I’m currently single! Cheers Critic and Dog with Two Tails!! I had a blinder!

After getting an email from Critic early on in the week I had an excitement building in me all week for the Blind Date on Thursday night! When Thursday came round I found myself looking forward to the night and with butterflies in my stomach. It's not often you find yourself at a bar with a complete stranger for the most part of a night. I decided to get ready at my flat, with the girls and I deciding to have a few drinks while I tried on a few of my favourite dresses. The other girls in my flat were also going out and had been drinking for a long time already, so I decided to taxi down to the Dog with Two Tails!

Once there I had a quick look round and spotted a rather cute boy sitting at the bar talking to the bar staff. Seeing as he was the only person in the bar by himself I decided to walk on over and try my luck. Thankfully, he also was here for the Critic blind date. We decided to walk on over to the table we had been seated at. This is where the end of the night begun… I assume my date was trying to be a pure gentleman and pull my seat out for me, however when doing so, I had decided to sit down… This resulted in me falling flat on my ass in the middle of the restaurant and my date almost shaking in embarrassment.

The chat got a little bit awkward afterwards and I could see how embarrassed my date was. He was so red in the face he almost put the devil to shame. We kept talking for a wee bit longer and once the bottle of wine was finished I thought I would go meet my other flatmates. We parted ways on good terms, but I don't think there was much of a spark after that wee incident.

Overall a great night, thanks Critic and Dog with Two Tails! I hope my date is feeling a little better!