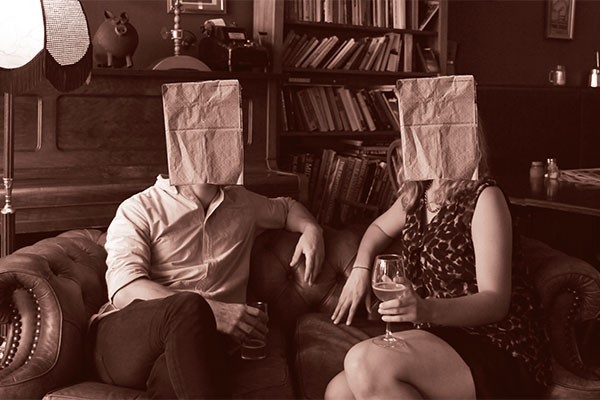 Following true Critic blind date tradition, I was rudely informed by my flatmate one afternoon that I was going on the blind date. In three hours. So as any self respecting girl would, I immediately cracked into the vodka and yelled at said flatmate.

So approximately ten minutes late I wander into the bar, hoping that I had arrived at the perfect level of fashionably late. Turns out I had, wandering in a minute or two after my date. As a six foot tall girl, it’s always a treat to find a tall guy, and this guy was tall, and cute, and he was my friend’s flatmate… Which kind of ruled out hopes for no strings attached, no holds barred, kinky fuckery in the bathroom. However, he was lovely, about as cooked as me, and a pretty good companion for drunk chats.

Our strategies aligned pretty perfectly, aiming for minimal food and maximum use of the bar tab. The conversation definitely flowed, and at some point we decided to nick the rest of the bottle of wine and gap it. We headed back to the party at his, only stopping on the way to grab more vodka from my place (bad idea).

The rest of the night I spent getting progressively more smashed, and eventually found myself drunkenly zigzagging home at 4 am. Sadly, no juicy goss to share with the Critic readers, but I definitely had a thoroughly entertaining evening. Cheers Critic and Dog with Two Tails for a great time, and the opportunity to cross off that bucket list item.

Being a typical hot blooded male, I leapt at the chance for a free date with a pretty girl at the world class establishment of the Dog with Two Tails. My amazing flatmate set the date up, tidied my hair and ironed my shirt (despite making it to the age of 20 relatively unscathed, I have not yet figured out basic household appliances). After downing a few too many shots of vodka, I tottered off to town, where I was pleasantly surprised to find a gorgeous girl waiting for me. Like any true scarfie, she also had more alcohol than blood in her veins, and we proceeded to demolish the bar tab with style. Banter was top-notch - although to be honest, I was a bit intimidated by her beauty and intelligence. Given that my flatmate was one of her good friends, we decided that a cheeky quickie in the bathroom was probably not a good idea, and thus after drinking our fill, we headed back to mine, where a party was raging already.

I immediately caught the eye of a beautiful blonde girl who was dominating at beer pong. The fact that she had been invited as an attempt to set up one of my close friends with a girl didn’t dissuade me from making a move. Classy pashing next to the kitchen stove resulted. My date meanwhile was off on her own romantic pursuits but she was too far gone for any sexcapades. Cheers Critic for the wonderful date, please don’t pick someone so obviously intellectually superior to me next time xoxo