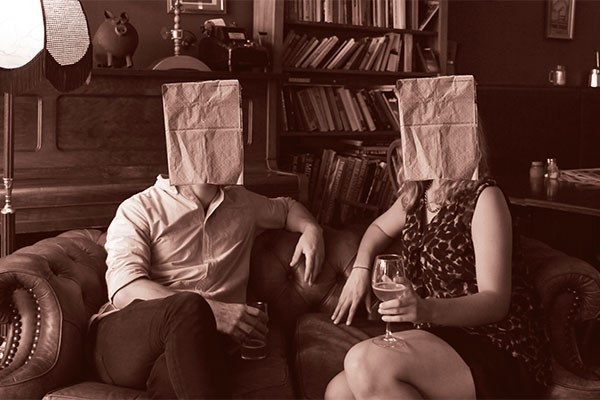 After a few years at university here at Otago I finally had my arms twisted by the flatties to go on the Critic blind date. After getting an email saying that I was off on this week's date, I immediately started to get butterflies and a wave of nervous angst washed over me.

I decided to have a few glasses of wine with the flatties, as they too had started drinking for a big Thursday night ahead. After a few pino’s and a quick shower I decided to slip into my favourite little red dress and head down to the Dog with Two Tails.

Upon arrival I looked around the bar nervously and saw a young man sitting by himself, obviously waiting on someone else. I went on over and introduced myself. We immediately hit it off, and discovered straight away our mutual love for tequila shots. For some strange reason, after only one drink each we decided to start on the tequila shots. One bought two, and two bought three. After a couple I was feeling preeetty happy.

After seeing the tab off on our tequila shots, wines and of course the chips to soak up the alcohol we decided to kick on. For some strange reason, out of nowhere the possibility of heading to the karaoke bar took a stranglehold of the conversation. And so we did… One ABBA classic lead to another and after a while we decided we should hit the door, head back to his, which was just around the corner.

After sneaking into his room, as not to wake the flatmates, and we ended up going halves on a baby… No I'm only kidding, I'm on the pill! Or am I….?

I got a call from Critic, after the lads had stitched me up and nominated me to go on the blind date. I reluctantly accepted the offer. I'm not one to look a gift horse in the mouth… That, and my tinder was running out of matches. I decided before the date to tuck into a cheeky wee six pack of Diesel's, one of the best drinks known to man, just so I would be able to loosen the tongue a little.

I got to the bar early and asked the bar staff about the blind date. At this stage I thought it was still a bit of a joke from my flatmates, and I was just waiting for them to jump out from behind the bar with their cameras in hand. But alas, I was told that I had arrived early, and in doing so, decided to treat myself to a pilsner and had a seat.

She arrived a few moments later and immediately realised I must have been her date, given the fact I was sitting on my lonesome with a frothy moustache.

She seemed like an awesome chick straight off the bat. The chat flowed, and we both discovered a mutual love and respect for tequila. After a bit more discussion on all things relevant; politics, medicine in third world countries and of course favourite sexual positions, we decided to line up a few tequila shots. Sadly we were limited to two at a time, but jesus did that do the job.

We decided to head off shortly after, and after quickly stopping off at the karaoke bar to belt out a few classic ballads, we somehow ended up back at mine.

Once into my humble little room, things took a natural progression and just as I reached for the laptop to obviously chuck on a nice romantic film, my hand was slapped away and instead placed on her body.

Thanks Critic and Dog With Two Tails! Would definitely recommend!