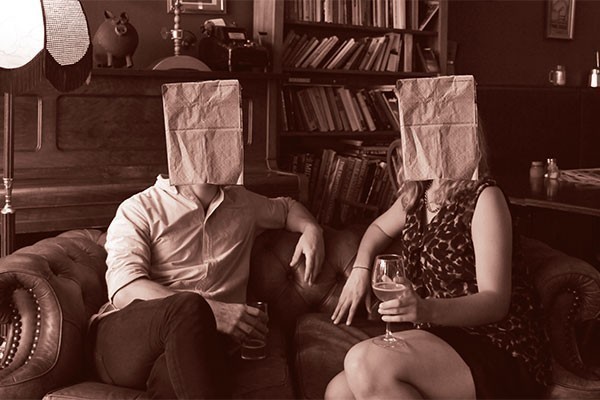 I was pleasantly surprised to see he was a normal attractive guy with a good smile. He introduced himself and we started chatting about our strange situation. He then introduced himself again a minute later to which I pointed out. Couldn’t tell whether it was nerves or whether he’d had a few before his arrival.

Five hours later we were still at the restaurant. I began to lose count on how many drinks we were having, and the conversation only stopped when one of us would pay a brief visit to the bathroom.

My memory is hazy on all the subjects we talked about, but that’s understandable considering a non-stop five our conversation with alcohol involved. I do know however that it included exchanging sex stories, drunken night adventures, shitty high school experiences and living with five other siblings. Eventually we got on to the conversation of hot chips. No idea how. We began a heated debate on the name on the crisscross shaped hot chips at Night and Day. We eventually settled on calling them Scottish Kilt chips.

Because we had a mutual love of Harry Potter he invited me over to his flat to watch one of the movies. Now we all know what this means.

We “watched harry potter” several times throughout the night. I tried to pull a runner around 4am, not because he was bad, he definitely wasn’t, but rather I just never stay the night. Ever. But because it was icy and the Taxi’s weren’t working I had to face my fears and stay till morning. Which turned out to be completely fine. All in all I had a great time. Thanks Critic!

As per I left getting ready to the last minute. Donning my finest, feeling on a fantastic level, I got my flattie to blitz me down to The Dog With Two Tails. Arriving ten minutes late I noticed two lasses both sitting on their own - a nice looking blonde, and the other one… Fair to say I was relieved when the barman told me it was the blonde.

Upon sitting down and engaging in the initial admin, it became increasingly clear that I had come in way too hot. Thanks to the free bar tab she eventually caught up, and I knew it was my time to strike.

After drying the tab, and buying another two rounds between, us we left late. Proceeding to Night n Day for some nice criss-crossy chips I pulled my winner line “ You wanna come back to mine and watch some Harry Potter?”

It never goes amiss (except for the last six times in re o) and to the taxis stand we went.

I got the movie cranking back at mine, but it was clear she only had one thing on her mind. So I put on my invisibility cloak on and went straight for her restricted section. Four rounds later and a new day upon us, my date taxied home. Turns out my flattie next door had limited sleep that night.

Shot Critic for the mad time/free booze and giving me the opportunity to find out where my bed squeaks and also end my dry spell which was going on many moons.