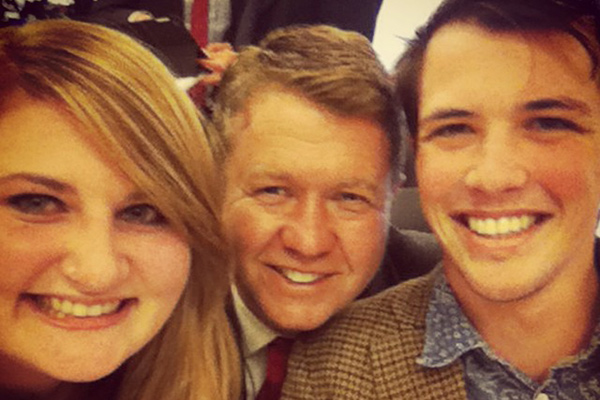 The next Prime Minister?

DISCLOSURE: Carys is a Green Party hack who is hardcore hacking it up for the election. But don’t worry – she has a few National Party friends who don’t hesitate to send in angsty letters to the editor when she strays too far into shill territory.

In David Cunliffe’s ideal government there would be Labour, the Greens, and New Zealand First, with Labour the “strong lead.” There’s no chance Russel Norman would get the finance portfolio, and Cunliffe is “ruling out having Internet-MANA in the government,” probably to the distaste of the Internet Party’s growing following. The potential next Prime Minister of New Zealand has a clear vision of what he’d like the country to look like, even if the Labour Party has, in the past, appeared to be crumbling around him.

In the lead up to the election, Cunliffe has rarely been painted as the staunch leader; whether part of a Dirty Politics smear campaign or a conscious effort from the Labour Party campaign team that Labour should be, well, a team, the result is a serious contrast between the presidentialised representation of John Key and the group of Positive Thinkers.

This makes for an interesting point of analysis. We’ve all been plugged full of John Key media, from the #TeamKey hashtag, to the entirely John-focussed opening night broadcast. The National propaganda factory presents us with a man we can trust – someone who’s one of us; someone we can have a beer with. We’re not voting for National, we’re voting for John.

Labour haven’t made the switch towards Americanised style presidential campaigning. A focus on community and improvement has led to a campaign with many faces, and their endearing DIY lens flare broadcast effort pulls together many members of the MP team. When comparing it to the National campaign, there’s a greater sense of diversity, but there’s a lesser sense of a Real Personality running for Prime Minister. Despite following New Zealand politics so closely this year that I’m now convinced I have no other skills and interests, I’m still not entirely sure who David Cunliffe actually is.

Part of it, no doubt, is that the media have not been kind. Stuff and the New Zealand Herald have been quick to point out the moment Labour makes a wrong move, painting them as the party of gaffes and mistakes. They’ve been represented as dishevelled and not ready to lead – much to the distaste of their members. As a result, or perhaps the cause of the less-than-favourable treatment, Labour has consistently polled poorly.

It also means we’ve not been treated to a proper look at David Cunliffe as a person. The closest we came was during John Campbell’s “at home with the politicians,” but Cunliffe’s extremely impressive wife easily eclipsed his performance. There aren’t puff pieces about Cunliffe as there have been about Key, and in the wake of the Dirty Politics scandal, most of Labour’s positive media attention has come from their policy announcements. Given that these have been relatively well received by members of the public who’re left of centre, it’s another inexplicable piece of Labour’s 20-something per cent puzzle.

Then there was my personal favourite article, a piece by Deborah Hill Cone, titled, “Cunliffe’s problem is that he just isn’t sexy,” as though Cunliffe’s sex appeal has some bearing on his ability to run a political party. Cone’s article inadvertently reminded me of a quote from an Ian McEwan short story, Butterflies, in which the narrator comments, “my chin and my neck are the same thing and it breeds distrust.” The irony of the description is in the ending, which reveals the narrator to have killed someone, thereby absolving his lack of distinct chin and neck of being the reason for the distrust.

As is McEwan’s custom, the use of a thoroughly disturbing mental image to prove a relatively simple point is effective; I find the idea that one shouldn’t trust someone because they’re “not attractive enough” is more disturbing to me than McEwan’s narrator. I don’t think it is fair Cunliffe is frequently judged as not having a friendly enough face. As far as I’m aware, he hasn’t killed anyone, and he has certainly proven himself to be relatively trustworthy. So where does the aversion stem from?

With this in mind, I set off on an intrepid journey to meet the man when he visited campus the other week. He was in Dunedin for a whirlwind of meetings that included a meet and greet, a policy announcement, and a tech start-up visit. When I arrived at the meet and greet, he was swamped with students, left, right, and centre. Red clad #TeamCunliffe members formed a cluster just nearby, led by Dunedin North MP David Clark, whose job was to make sure each intrigued member of the student public was given an adequate amount of time with the man. It was busy, and I realised very quickly I wasn’t going to get the long, in depth sit-down I’d hoped for. Instead, I got two and a half minutes and a selfie.

Cunliffe handled himself well, effortlessly moving from person to person and seeming utterly unphased by the swarm of eager onlookers, and made at least three jokes while I spoke to him. It’s hard making a full evaluation of someone in just a few minutes, but my first thought was: “He’s nice. He’s nice and he knows what he wants.”

I asked him first about his tertiary education policy, which was released the Monday before his visit, and was covered by Critic (much to Salient’s distress, as they mistakenly thought they’d got the exclusive). There was nothing overwhelmingly surprising in the package: re-instatement of postgrad allowances, re-establishment of proper representation on university councils, and “increased funding for courses where New Zealand can create wealth.”

When I asked what that meant, Cunliffe rattled off “science, maths, economics,” a mildly disappointing clarification for the Bachelor of Arts (Hons) in Politics student I am, but he clarified he meant “a stronger alignment between the needs of the employment market and the courses that are taught.”

I didn’t manage to get too much out of him about changes that weren’t mentioned in the package – when I asked if he’d reinstate the early repayment bonus, he said he’ll “come back to me on that,” and when I asked if he had any changes in mind for living costs and allowances, he said “that’s a matter for the review.” Cunliffe certainly has his “no way I’m going to tell you” responses down pat. For the record, he also thinks Judith Collins should resign.

While I wasn’t able to get coffee with Cunliffe and chat about our hopes and dreams, I did get a sense of what he was like; he has a confidence and a competence that I find reassuring, and was straight-forward about his intentions for, what he hopes, is the next Labour-led government.

The next stop on Cunliffe’s Dunedin journey was the Hunter Centre, where he was all set to deliver a policy package aimed at Dunedin. Labour supporters flooded the main area, much to the surprise of the unsuspecting students who were studying at some of the tables, and it didn’t take very long at all for the space to fill up. Cunliffe was a celebrity, and I have no doubt there were people in that audience who only decided to vote for him having seen him speak in person.

The actual announcement was the most Labour thing I’ve ever heard. He spoke of positivity, of how New Zealand ought to be “the fairest, most decent society in the world,” and of the “rock-star economy” (which reminded me of a quote from Richard Leckinger, who commented at an arts debate something along the lines of “the rock-star economy is going to be found auto-asphyxiated in a hotel room with white milk-powder around its mouth”).

He spoke of everyone getting a “fair go” so often I wondered if he was being paid by Fair Go to do so, and noted he’d save Invermay, much to David Clark’s joy. Most importantly, I think, is he announced a massive, multi billion-dollar upgrade of the Dunedin Hospital.

I left before the speech finished; I’m positive (ha) I missed nothing too much of note, and I completed my main task of the day – meeting and talking to David Cunliffe. Despite the tiresome media condemnation and reporting of relatively unimportant mistakes, I liked him. He was clear and straightforward, a quality that’s extremely welcome in the wake of Nicky Hager’s revelations about the secret underbelly of the Beehive, and was willing to answer the questions I threw at him in quick succession.

With the election now less than a month away, I look forward to seeing Cunliffe and Key go head-to-head in the leaders debates, and I look forward to seeing how Stuff and the Herald go about reporting them. In case the coverage is less than favourable (inevitable), you heard it here first: David Cunliffe is cool.
This article first appeared in Issue 21, 2014.
Posted 5:55pm Sunday 31st August 2014 by Carys Goodwin.