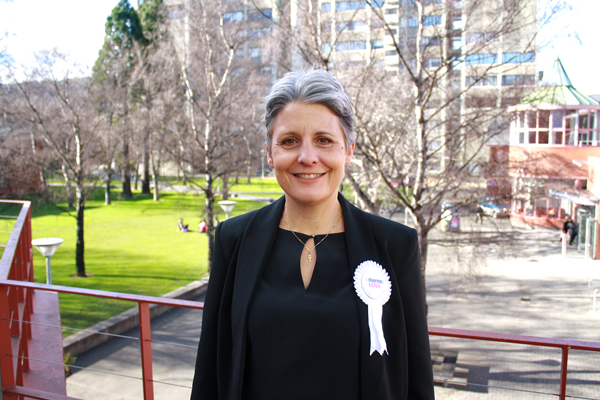 Laila is, without a doubt, a politician. She has deftly navigated herself across the political scene for years now, and her latest adventure as leader of the Internet Party is no exception. Even with a head cold, she was able to redefine and tear apart every question I asked her. It’s intensely interesting to watch a new, slightly dishevelled party be taken under the wing of someone so known in the political sphere; meeting her made me realise if anyone is able to give the Internet Party some clout, it’s her.

I’ve got a few things I want to talk to you about. The first thing is that your tertiary policy announcement has yet to come, but I was just wondering, what are some tech projects the Internet Party wants to bring to universities?
[...] The focus of our tertiary policy is on funding. So we are promoting free tertiary education, and our policy is centred on full funding of fees and a universal student allowance, and tackling the existing debt burden on people who’ve graduated. So our full tertiary education policy is going to be under development beyond the election. It’s not an area that we’ve put at the top of our list beyond the fees/student costs issue for detailed policy development pre-election.

Yeah, obviously I haven’t seen it ‘cause it’s under construction, I was just wondering if there was, sort of, a technological edge. Or is that a different policy altogether?
We’ll be releasing our innovation policy in the next few weeks; that will be another blockbuster of ours. It’s one of our top six platform issues, and it will certainly refer to the education system. But it’s primarily built around how we propose to make New Zealand an incubator for start-ups, and to push for the globalisation of start-ups from a much earlier stage than we currently have. So what we understand is the whole lifecycle of the tech process, and that is what we’ll be focusing our innovation policy around.

Just regarding universal student allowance, interest-free loans, fee-free, etc.; that’s quite a common policy across a lot of parties.
No it’s not.
On the left it is.
No other parties are committed to a priority of tertiary education.

The Greens have a tertiary fee-free working towards policy as well.
They may have it as a working towards policy, they haven’t got it as a priority ... I mean, that wasn’t new to me, but when I’m on platforms with the Greens and the tertiary institutions, that isn’t the message that they’re giving. I mean, I’m not having a go at the Greens here, but the fact is, that we are the only party that treats tertiary education as a priority, and we don’t just do it when we’re standing on university campuses.

Cause, yeah, it’s transforming from a right to a privilege, which is problematic.
Totally problematic, yeah. For me, the social contract depends on people experiencing the power of community as they’re growing up and developing and becoming adults. What better way to create a sense of community, social engagement, than to provide people with maximum education opportunities? And for people to understand, as I did, that we had opportunities because we lived in a democratic society. So free tertiary education is a very powerful society-building tool, and of course it’s also a very powerful economic tool, and we’ve seen time and time again countries that introduce free tertiary education overtaking us within ten years on the technology and innovation stakes. It’s a precondition to a tech economy.

You’ve traditionally been a champion of women’s rights, which is fantastic, and I was looking at one of your policy incubator discussions about your intent to decriminalise abortion. Some of the negative comments were pretty horrifying. Obviously there is a lot of positive response, but I was wondering how you feel about the reaction?
I didn’t see too many horrifying comments. First of all, the overwhelming reaction of our members was support.

Mmm, like 75 per cent.
And I think every party has people who feel strongly opposed to a woman’s right to choose. I didn’t think that those people generally put that in a hostile or negative way. There were some, but that’s their right. I don’t think you should overplay that. I think what’s great is the size of the majority in favour and I think the pretty respectable way people who either wanted to block it or oppose it went about putting their views forward on the poll. So no, I didn’t react negatively to that at all. That’s democracy. No other party is prepared to have these discussions in public. The very fact that you’ve seen our debate shows how different we are and how we’re not scared of debate. I mean, I’ve spent a lifetime in parties that try to close down every sensitive political debate. And I’m proud of the fact that we do it in the open.

Within the context of the last few weeks, we’ve had big discussion about whether or not there’s a rape culture in New Zealand. So do you believe there’s a rape culture in New Zealand?
I wouldn’t express it that way, I don’t think that divisive language helps to protect women from violence, and it’s not empowering language, and it’s not positive language. So it’s not the language I would use to describe gender relationships. That doesn’t mean that there isn’t rape, that there isn’t sexual violence, and there isn’t gender inequality – of course there is – but I would prefer to define New Zealand’s culture in far more empowering terms than that. Don’t like the language.
What sort of terms?
I think we have unbelievable power as women in this country, and we face many obstacles to using our power for good. And so the culture of New Zealand is a culture of innovation; first in the world for women to win the vote. One of the last in the world to deliver paid parental leave, so we’ve had some great highs, and we’ve taken a long time to catch up with the reality that was generated by women entering the paid workforce in large numbers. We have tough, strong women in this country, and we need to be in an environment where our equality is valued by everybody and we’ve dealt with issues like domestic violence, like pay issues. I understand the reason people use really provocative language, but it’s not something I did in the 1980s and it’s not something I’m going to do now.

With things like the environmental policy, some of it’s not too dissimilar to the Green Party, so I’m wondering what’s better, or what do you think you could bring to the environmentally conscious people of our country?
I don’t think it’s a question of “better and worse.” I mean, I think it’s great that we’re having a competition for the best environment policy, by the way.

So do I!
What better competition to have. There are some things in our policy that are unique. For instance, our commitment on renewables by 2025 for electricity is the strongest plan for that, and our focus on things like e-waste is unique within our policy. There are also those that we’ve referenced directly to the Greens, for instance, we totally support their proposal to dump the Emissions Trading Scheme and replace it with a carbon tax. We don’t agree with the way they want to use the funds from the carbon tax. So there are some differences, but there’s an awful lot of common ground, and our policy was created by three hundred of our members actively engaging in the process as well as a lot of expert input from outside the party.
This article first appeared in Issue 19, 2014.
Posted 9:16pm Sunday 10th August 2014 by Carys Goodwin.