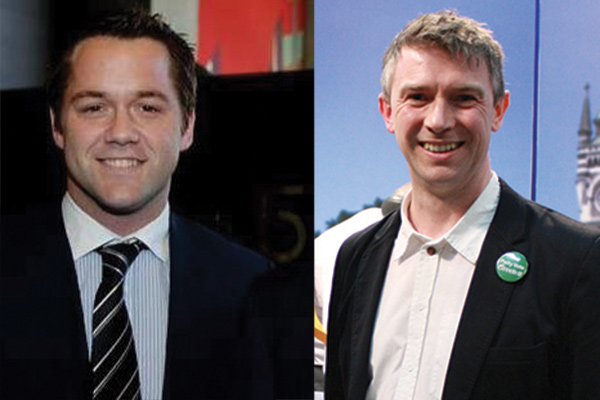 The battle for Dunedin South

Since I’ve already featured an article in which I followed Clare Curran around for an afternoon, I figured it was only fair to take a look at two of the other people vying for the spot: Hamish Walker of the National Party and Shane Gallagher of the Greens. Initially, I was hoping to host a debate between the two of them, but Hamish is a very busy man and ended up being unable to make it. My dreams of a verbal swordfight were shattered. He emailed me answers instead. I still spoke to Shane, however, and gave him the opportunity to respond to some of the things Hamish said. In case you’re thinking “BIAS,” one way or the other (inevitable), think of it like this: Hamish got the day to mull over his responses and present them in a written format (and the last question was only asked of him); Shane got the last word and was able to hear some of Hamish’s responses. If Hamish wants to respond to anything Shane has said, he is invited to write a letter to Critic. For ease of reading, they’re presented as follows: Shane’s answer to question, Hamish’s answer to question, Shane’s response to Hamish.

What are some initiatives you have to improve employment for people in Dunedin South?

Shane: Well, we have a range of issues, ‘cause we try to approach everything holistically, so the headline things are: the $1b research and development fund, which is looking at industries that are green and sustainable; one of the key areas that Dunedin could be looking at there is biofuel, so biofuel development. We have a lot of woody fuel, with the city forests. I know that Celsius, which is a New Zealand biofuel company that’s now gone overseas because it wasn’t able to get the venture capital, wanted to base one of its processing plants here in Dunedin, but wasn’t able to raise the funding. […] We’ve also got IT design, the Green Investment Bank, which we’re proposing, so people come up with innovative ideas of their own, then get loans from that.

Hamish: I would love to see more opportunities for people (and high school students in particular) to try work experience across a number of different businesses and industries in Dunedin South. […] We also need to make it easier for students to get work once they graduate. I would like to see more students placed into internships during study where more “real world” experience is gained and gives students that experience. […] After six years of a National Government, we now have more youth engaged in education, training or apprenticeships now, than ever before. […] Ministry of Employment, Innovation and Business estimate the 90-day trial introduced a couple of years ago has resulted in an extra 13,000 jobs, mainly to people who wouldn’t have been given that opportunity under old employment law.

Shane’s Response: Well the 90-day trial hasn’t improved any jobs, it hasn’t given anyone extra jobs; it just means employers are more likely to sack you. It doesn’t actually create jobs, this is some sort of fallacy that you have some sort of change in the way you can employ someone and suddenly this magically creates jobs. Jobs are created by stimulus in the economy, activity in the economy, and so the idea that you can magically create jobs by changing the working conditions is not tenable; it makes no sense. And unless there’re actual jobs there, in the economy, how can you transition to them from education? Again, it’s just not joining the dots, there’s no sense to that, there’s no continuity. [In-study internships] might be an okay idea, but [since 1988] […] people’s wages have remained flat while productivity has massively increased, and that money’s gone somewhere, and we know where, it’s gone to the very top, because that’s what’s driven inequality in New Zealand. So the thing that drives economies is you need to start getting money into people’s pockets so that they can spend, so you want to increase the wages, so you need to increase minimum wage and get them working on a living wage, cause people shouldn’t have to subsist on a wage they simply cannot live on in order to boost the profits of a company. […]

What about businesses? What do you plan to do to help them?

Hamish: I would like to see more interaction between businesses in Dunedin. Networking between different businesses through local business associations/groups/employers association allows them to work together on common problems and that can only be a good thing. Moreover, I would also like to see these groups working with students more. The transition between university and work would be smoother, not only for the student, but more so for the employer if they have more say on what they want from students upon graduation.

Shane’s Response: I mean, [networking between businesses] is one of those catchphrases that actually means nothing, and one of the things they could have done, for instance, was ensure that Hillside Workshops actually were able to build trains. Because when you take jobs away and hand them off to China or hand them off to Spain or wherever, you’re taking away jobs and you’re taking away money within the economy. So Hillside Workshops did a lot of subcontracting to engineering companies throughout the whole of South Dunedin, and South Dunedin is a major engineering hub, and it has always been one of those hidden secrets; those open secrets that no one really knows about. But Hillside Workshops was a really major engineering hub, and now that has been taken away, you’ve torn out the heart of the engineering sector in Dunedin. It’s still there but it’s struggling.

Another issue for Dunedin South is poverty, as many of the population hubs in the electorate are dense and poor. What do you plan to do to help people who’re struggling?

Shane: Again, we’ve got a lot of policies, which line up together or come together as jigsaw pieces, so again we want to raise the minimum wage, we want to get people being paid the living wage, we want to reduce costs by reducing people’s power bills, we want to extend the insulation scheme. […] And by also introducing our NZ Power idea we can actually reduce people’s power bills by $300 a year. […] If people are healthier and happier and have a bit more money in their pockets that stimulates your society and your economy. We also have the Carbon Tax: we’re going to give people a tax cut, and it’s a $2000 tax-free allowance that will basically mean you get an extra $300 a year. It doesn’t sound like a huge amount, but again, with the savings from your reduced power bills and increased spending power from being able to have a decent wage through a minimum wage job, these things all add up.

Hamish: I will work with a number of different agencies to get a good stock take of what the main problems are out there. I will then lobby for the needs of the people of Dunedin South. […] I will be talking to different groups, for example church groups, community groups, and other organisations to see where we can help each other out. The Student Army is one example of the benefits the community can achieve when it comes together. I have also visited community hubs in Dunedin South where people struggling to put food on the table meet regularly for play groups and soup kitchens. These hubs are doing great things for the community and families involved.

Shane’s Response: Again, he’s denying the fact that these are systemic problems created by his government. I mean, they’ve created the situation in Dunedin where we have poor jobs; we’ve lost 44,000 jobs in the manufacturing industry alone. And Price Waterhouse Coopers has estimated that if we went down the green sector route, the green industrial route, that that could be worth $22b a year to us as an economy. […]

Shane: Well, we need to actually start talking to local government on a real level. One of the interesting conversations I had with Mayor Cull was that when they met with the Minister for Local Government that they were uniquely unimpressed by his dismissive and aggressive attitude, that he was basically telling them how to do their jobs. And what we really want to do is partner with local government, ‘cause local government can have a lot of initiatives, and they come up with the local solutions. […]

Hamish: It’s important to have a good working relationship with the mayor and councillors and be fully briefed on what’s happening in the district. I need to be fully aware of the local council and what they are doing and what their aspirations are for Dunedin South.

Shane’s Response: Again, look at the track record of what National’s done. We had Environment Canterbury turn around and say ‘we don’t like what you’re doing’; then the National Government simply abolished democracy in Canterbury because they didn’t like what ECAN were telling them. […] There’s not an environment in which local government and national government have trust in each other because any local government body now always has to second-guess themselves about if it is going to upset the National government. Let’s again look at the record, because the record is pretty poor on this matter.

With regards to providing facilities for the community, who should do what is often difficult to ascertain. What do you believe your role would and should be in this context?

Hamish: I will work tirelessly and dedicate myself 100 per cent to the people of Dunedin South. The people will identify the facilities they need and I will lobby forcefully on their behalf. While we are on the topic of community facilities, I would love to see a facility in Dunedin South where youth have somewhere to hang out during the weekends (especially in the evenings), which will keep a number of them out of trouble.