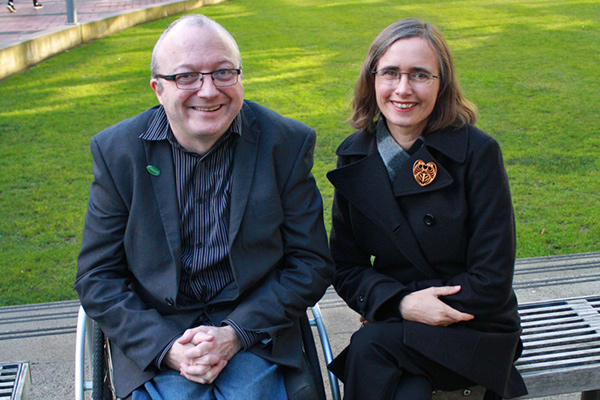 Disability rights are not often talked about at university. Given that almost one in four New Zealanders are disabled in some way, it is definitely a topic that should make more waves at Otago. I spoke to Mojo Mathers of the Green Party, who is the first profoundly deaf New Zealand MP, and Chris Ford, a Greens list candidate, disabled, and strongly involved with disability advocacy. The issues that disabled people face are as much social as they are monetary, a concept Chris explained to me as “the social model of disability.” He and Mojo both argued the most disabling part of being disabled is the way they’re treated, and a lot of work needs to be done to change the way employers and the public considers disabilities.

You’ve both done a lot of work in the disabled community. What is one of the main things that the government needs to change in how they support disabilities and disabled people?
Mojo: Well, New Zealand has signed the Convention on the Rights of Persons with Disabilities, but the government really needs to step up and give full effect to implementing the convention. That covers all areas of life from accessible buildings, to employment, to access to information. The overarching principle is that disabled people have the right to full participation in society on an equal basis with other people.
Chris: I think that that’s quite a fair summation from Mojo. I feel that the UN convention is something that we, as disabled people, have fought for internationally for a long time. And now that it’s there, we should utilise it as a tool to create the equality that we as disabled people seek.

So I’ve seen you do some work with making sure Christchurch is rebuilt fully accessible; is that one of the main issues you’re pushing for?
Mojo: It’s definitely one of them. To ensure that the Christchurch rebuild is fully accessible will require that the building code and standards are updated, so it will have the nation-wide implication that progressively all new buildings will become accessible. And they should be, in the 21st century.
Chris: And also the other concern that Mojo has been campaigning on too has been earthquake-prone buildings legislation, and that is a real concern because what the government is proposing is to decouple the present requirement that when buildings are earthquake strengthened or fire strengthened, that they are also made fully compliable with current building access standards. Now, to decouple that requirement means that a lot of our buildings, including heritage buildings, will not be able to be made accessible, and therefore that will deprive not only disabled people but also older people, also parents pushing strollers, and so forth, of the right to full access to public buildings.
Mojo: Absolutely, because it’s the only mechanism we currently have in law for updating older buildings to modern accessible standards. If we take it out of the Earthquake-prone Buildings Amendment, then we’ve missed an opportunity for upgrading and modernising older buildings.

What is the government currently doing?
Mojo: The earthquake disability leadership in Christchurch organised a petition, which I launched with them, signed by over six thousand people. It was handed over to the government last year, so the government has done a review of the building code act and they have come up with a list of recommendations for action. But that won’t be presented until after the election to the minister.

The next area I want to talk about is regarding disabled students. Because it’s not something I often hear about, and I was just wondering what in particular you’d like to see happen support-wise?
Mojo: The different universities have different levels of support for students with disabilities. So I know that at Victoria University they’ve really led the way in ensuring a lot of support is available for students to pursue their studies. It’s incredibly important that disabled people have the ability to continue to up-skill and access further education, particularly because there are so many barriers to entering employment as it is, so they need to have the opportunity to gain these skills. So there’s a lot that universities could do to be more accessible; I’ve had students approach me about things like accessible information, or things like showing videos without captions, which makes it very hard for deaf or hearing impaired students, things like providing documents in accessible formats, and then, of course, some university campuses are very difficult to get around for students in wheelchairs, so there’s a lot that needs to be done.
Chris: And I know from being a graduate with a disability about the various barriers that I encountered back in the 1990s here at Otago; they were far more surmountable than they are today. I think that in terms of relative comparisons that Otago performs well in its support for disabled students. But there is a lot more yet to do. I do know that the legacy of the late Donna-Rose McKay is very well felt here, and I think that her legacy needs to be built on and that includes the students around New Zealand as well. And also the other thing, and even though it may veer slightly off the question, is the issue of employment for disabled graduates. That is a really big issue. I’ve found that myself at various times that getting employment has been a real difficulty for me because of the attitudes of employers. That’s a real issue for a lot of disabled graduates. They see, as I’ve seen, their peers go ahead and get jobs whereas disabled graduates find it more difficult to access employment. And I think, really, the realisation of the UN convention is just one way in which disabled people and disabled graduates will be able to realise their dreams of being able to land jobs just as quickly as their non-disabled peers.
Mojo: Touching on employment, one of the things that really comes up time and time again is the importance of employers focusing on the skills of disabled people; rather than what they can’t do, what they can do and what they can bring to the job. Because very often we can work around barriers. We have the concept of “reasonable accommodation,” which means sometimes maybe slight modifications of the job description, or not requiring a driver’s license if driving isn’t part of the job. These sorts of things.

Is there anything currently in place to support disabled graduates?
Chris: It’s the same sort of employment packages that are available for other people. But I think that more needs to be done to ensure disabled graduates are able to land appropriate jobs that utilise their skills to the fullest. And I think that will require government funding and support. And I think that that’s quite a crucial thing.
Mojo: There are support agencies, but there is a lot more that can be done. I think recently there has been an initiative to work with employers across the country to educate them about disability, and because there are often a lot of assumptions they hold; that disabled people just can’t do certain jobs. The same applies to me; there was the assumption by a lot of people that a deaf person could not possibly be a Member of Parliament, and could not possible do the job, and I often got questioned on that. How could you be an MP? How can you do that? So the negative attitudes and assumptions will often put disabled people in a box and people have very low expectations about what they can achieve and what they’re capable of achieving.

So there are a lot of strategies that can be employed to help out the way people view disabled people and the way that we support people in achieving their ambitions?
Chris: That’s right. And also, I think that the Greens are showing, with Mojo, myself, Chris Perley, and Rachael Goldsmith, that disabled people are politically active, that we are able to be candidates. I think the Greens are very committed to improving the representation of disabled people on the list, in particular. And I think that’s a good start.
Mojo: Absolutely, because actually to help create change and be part of a changing nation, we need to see disabled people widen their representation; it’s very important that we are able to stand for local government, central government, and be part of that change. Instead of having decisions made for us.

One last thing, which is about animal welfare, because that’s your other big “thing,” Mojo. So a lot of noise has been made about animal testing, especially around cosmetics at the moment, and I believe you introduced that amendment before – ‘cause I know it’s a recent Labour policy – am I right in thinking you introduced the amendment?
Mojo: Yup. I currently have an amendment to the Animal Welfare Amendment Bill that would ban the animal testing of cosmetics in New Zealand. I put it up at the select committee stage and we had a lot of discussion about it, and in the end the National Party MPs voted against it. But they said “oh, we support the intent, but we need more time to consider it because of possible unintended consequences.” So that was quite frustrating, but there is still an opportunity for the National Party to change its mind and vote for it at the next stage of the bill.

Just for a lot of curious people out there, does that involve no animal testing IN New Zealand? Or does it involve banning products that have been tested on animals OUTSIDE of New Zealand?
Mojo: To ban the sale of cosmetics [that have been tested on animals] would require a separate bill, because the Animal Welfare Bill only covers New Zealand. So it still needs support. Obviously it’s always been our policy as well, to oppose cosmetics being tested on animals wherever they come from, so we were really delighted that Labour had stepped up and agreed to that policy as well.
This article first appeared in Issue 18, 2014.
Posted 9:43pm Sunday 3rd August 2014 by Carys Goodwin.