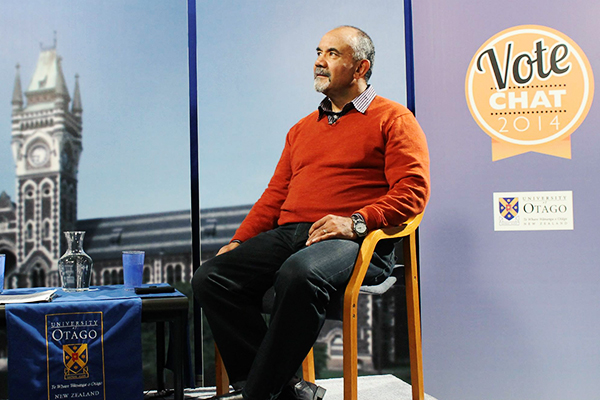 Since taking on the job of Critic’s Official Politics Nerd, I’ve been able to chat to a number of politicians. Normally, this results in a combination of great discussion and inappropriate questions (and answers). The opportunity to interview MPs and the like is not often awarded to students, and I enjoy being able to present student-related talk to the Otago populace. I take it seriously. This week, however, left me feeling a bit put out. I spoke to Te Ururoa Flavell, co-leader of the Maori Party, after he appeared on Vote Chat. It was disappointing. Disappointing because I truly value what the Maori Party brings to the table and was looking for some interesting discourse; disappointing because they’d requested the interview, not the other way around (the person I’d been in touch with was so enthusiastic about getting in touch and was truly grateful for the opportunity, so I feel bad that it turned out as it did); and disappointing because I’d given the topic areas in advance, so it wasn’t as though I sprung anything on Te Ururoa that he couldn’t have prepared for.

He was 25 minutes late, first of all, and didn’t bother to inform me that he wouldn’t be on time (I texted the person who’d been in touch with me after 15 minutes, so I did find out he was still planning on coming along). Second, after I asked the first question, he requested that I stop the recording (I restarted it after about 10 seconds) while he shuffled incessantly through a number of thick paper-filled folders to gather the answer. It really wasn’t a difficult question. Third, when he finally found the sheet he was looking for (three and a half minutes after I asked the first question), the answer he read off was word for word what is on their website. Funnily enough, I’d thought to look up the Maori Party’s tertiary education policies in advance. As a result, I felt as though the whole affair wasn’t taken seriously; that it was just a student magazine, and Te Ururoa wasn’t particularly interested. I wasn’t impressed. Hence this write-up.

In all honesty, it’s insulting to be dismissed as a disillusioned and “lost” sector of society when the very reason we’re disillusioned is due to a lack of engagement on the politicians’ part. It’s their job to capture our attention, and to appeal to us on both a personal and a political level; not taking us seriously is a dangerous step towards losing not just a vote for their party but a vote at all. The apathy is not inherent, and politicians shouldn’t treat it as such. It has been nurtured through being considered “just students” and having our political intelligence condensed down to a few buzz phrases that don’t capture just how important and formative these years are in figuring out what we value and what we ought to.

With Te Ururoa sitting across from me reading policies off a list it became abundantly clear that this was not about engagement, it was about publicity. Students aren’t in the political sphere because we want to be used as examples of politicians embracing diversity or youthfulness, we’re here because we do actually care. It’s particularly ironic that Te Ururoa claimed the Maori Party wants to “hear our voices” given he couldn’t remember off the top of his head how he planned to do so. The meaningful dialogue I’ve been taught to crave for four years wasn’t there, leaving in its place what seemed like the assumption that a proper discussion wasn’t worth it. Perhaps he was tired, or perhaps his lateness left me bitter from the start; either way, I felt as though the whole scenario wasn’t worth it, and that thoroughly annoyed me. “Go hard or go home” is a mantra Scarfies swear by; a little piece of Hyde Street wisdom that commands the utmost respect. It shouldn’t just apply to Scarfies.

So the first thing I wanted to talk about was general student education policy. I know the Maori Party is very pro-universal student allowance and all that sort of stuff. A lot of parties are. So I was just wondering what specifically would attract students to your party?
[Shuffling through papers]
I’m looking because there’s one that the students’ association put to us just recently. And it was about accommodation grants? National Students’ Association [referring to New Zealand Union of Students’ Associations]. Put it up by 40 bucks or something …

Okay so the student allowance currently sits at around $175, well the loan does.
The allowance for accommodation?

Yeah we get what’s called living costs, which is a weekly allowance or loan, depending on your financial situation. So $40, did you say?
No it was … that’s what I’m trying to blimmin’ get.
[More shuffling]

So is it something put to every party by the NZUSA? Or was it just the-
I think it was, but everybody had to, um … So everybody either endorsed it or something like that. Okay, now I’m a bit closer.
[Eureka moment]
Well I’ll just go through some of those things ...
[Next few minutes recited verbatim from the tertiary education section of their website
maoriparty.org/our-policies-kawanatanga ]

You mentioned increasing Māori representation on student councils and that sort of stuff: what about trying to engage students, specifically Maori students? I noticed there was something on the Vote Chat Twitter feed about the serious lack of engagement with Māori people in general, what about students?
So one of the things we have is that we actually have two former presidents of the NZUSA in our offices at the moment … And so you can understand that we have a good lobbying voice on the part of students, so that’s the first point. Second point is that we’ve always tried to get in touch with and get next to student bodies to ensure that we do hear their voice, and of course social media has opened up the whole opportunity to engage with students and these young people. So I’m not the expert, but things like Twitter and Facebook and stuff that we’ve all opened up now to engage actively, so there’s that element, but also an open invitation to the national student body, which we hope has been passed on, to have direct access to us as MPs, so that we can get a better feel for what students’ issues are […]

Do you support initiatives like Rockenrol? Are you going to do anything with them?
Yup, we’ve already issued a number of press releases on Rockenrol and think they’re doing a great job. There’s Vote Māori Vote, a younger group who’ve gone out there voluntarily to try and encourage people to vote as well, so we’re right behind them. The fact of the matter is that young Māori, young people, generally, are not taking up the opportunity to get enrolled, secondly to vote, and in fact many people are taken off the roll as well. Because they’re moving, year to year, move from point to point, and therefore they send the papers out, they don’t get sent on, you leave it, and they get taken off the roll, and nobody’s any wiser. So when it comes to election time, that’s not as if it’s sort of taken up. We’re definitely after more people voting, absolutely.

Yeah, we’ve got quite a big campaign around here for enrolling to vote, and I think you must’ve seen the big “enroll to vote” sign downstairs. Just to change topic a little bit, so coming into the next election, would you prefer to see a Labour/Greens coalition or a National government?
Well that’s sort of out of our hands, ‘cause all we can do is … We’ve got to get in first, so our priority’s just to grow ourselves. And then everything else takes care of itself afterwards, so if the question is “will we work with one side or the other,” the answer is yes. Simply because we recognise the fact that unless you’re at the table, you do not get anything. That’s the plain cold hard facts of politics, so if by chance, and, well there’s a couple of things. First is the maximum we can get is seven seats. So therefore we’re relatively small players. We’ve got to get them, the next question is that we’ve got to be asked to join the coalition, so we mightn’t get asked, and when we do get asked, we’ve still got to negotiate the terms of that arrangement, so the terms of arrangement with the National Party at the moment is “relationship accords,” which is different from a coalition agreement, so that allows us to vote with the budget only, to agree to disagree, and to no surprises. So all we have to do is tell them we’re going to disagree with them and they say “yeah fine.” We’re in the best position because we can still implement the things we want to by way of our relationship accord because of the fact that we get ministerial appointments, we get policy hits, which are negotiated, and budget gains. So doesn’t matter, one way or another, we’ll see how it plays, but we are determined to make sure we’re part of the relationship.

But where would you prefer? I know it’s cheeky of me to ask, but if you could choose, would you rather the left or the right?
We don’t see it like that. It’s about what we can negotiate because we don’t get placed, we don’t believe that we’re left, we don’t believe that we’re right, we believe that we’re Māori and that gives a different response to how parties deal with us. We’ve had six years with National, we don’t know what it’s like to work with Labour and/or a Green coalition, we haven’t had any discussions with them, so we don’t know how it’s going to go.
This article first appeared in Issue 16, 2014.
Posted 5:12pm Sunday 20th July 2014 by Carys Goodwin.