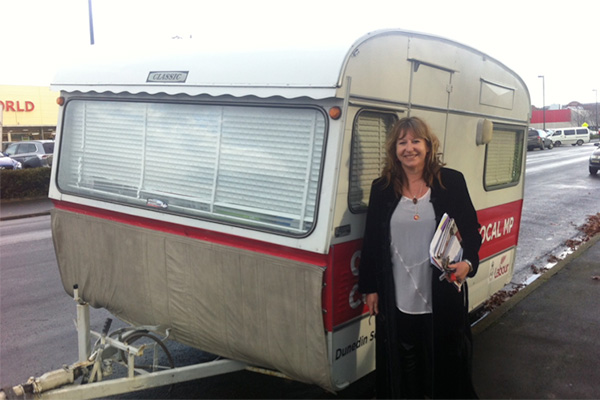 A Day in the Life - Clare Curran

If you regularly read this page, you’ll know I have a bit of a fascination with Clare Curran. The Dunedin South MP/Twitter Warrior provides me with great Politweets fodder, and has tried a few times to make #cheeserolls trend. In fact, my encounter with her came down to a Twitter conversation.

Not one to back down from a challenge, I agreed to visit her in the #realworld. After Clare was to appear on Vote Chat, I was to accompany her to a clinic in Mosgiel. An afternoon with the MP I’d featured twice as a Greatest Shit and too many times to count in Politweets? Fantastic. I was very excited.

Friday was a horrible day weather-wise: cold and pouring with rain. I got thoroughly damp on the way to Vote Chat, but was keen to see what Clare would pull out on stage nonetheless. Her morning was more interesting than mine: she’d abseiled down Forsyth Barr Stadium for charity as part of “Toss the Boss.”

The interview between Bryce and Clare predictably began with an in-depth discussion about cheese rolls, and Clare declared that Dunedin ought to have a giant cheese roll statue to welcome guests. I won’t go into too many details about the rest of the chat (it’s available on YouTube), but I will note that when a Twitter question of mine was asked during the show, Clare rolled her eyes rather dramatically at the mention of my name. Clearly she takes my status as a Critic writer very, very seriously.

When the interview finished, it was time to head to Mosgiel. Clare and I hopped in her car (which has her face on it, of course) and drove south. As we were driving past the University, she asked me, quite flatly, how I managed to be friends with National Party people. It’s all in the name of banter, I suppose. As we veered off from Pak’n’Save, she gave me a brief history of South Dunedin. Due to the rising water table and the high population density, it suffers from severe dampness and cold. She certainly knows the area, and I could tell she was truly annoyed about the lack of action to support the community. Most notably, the area lacks a community facility, like a library, that would bridge the ‘digital divide’ and allow more voters to become engaged in local issues. Mosgiel, the area we were heading to, is separate from much of South Dunedin; its microclimate makes it a few degrees warmer than most parts, and it is comparatively well serviced.

The conversation moved to the lack of police, until it was halted when Clare stopped to point out a mobility scooter. Given that this was Mosgiel, there were quite a few mobility scooters about. She pointed out every single one. She wasn’t kidding when she said she wanted one on Twitter a few issues ago.

We arrived at her caravan to find people already waiting. She’d explained to me on the way over that Mosgiel residents can’t always get into town, and that visiting them was one of the only ways they’d get their issues dealt with. I was expecting a lot of banter and some good fun; I was wrong (although the first person pointed out that Michael Woodhouse’s advert might not abide by electoral law, which I enjoyed). The reality is that the caravan was cold and the people were struggling to deal with the bureaucratic mess that is WINZ.

There’s a serious lack of funding for the institutions that people rely on to get by, and as a result mistakes are made. These sorts of mistakes often mean people go hungry. In the bubble that is North Dunedin, it’s easy to wear the cold and the shit dinners as a mark of pride; as something to prove you’re a student and you’re tough, so that one day you’ll look back on it with nostalgia. But for some people, the cold and the shit dinners are as good as it gets. Clare, in her little caravan, is trying to help them.

We were there for a couple of hours, getting progressively colder, until we decided it was time for a cheese roll. In the car on the way back, the chat picked up; I asked her about her fellow MPs and got a couple of gold quotes. Peter Dunne, according to Clare, “fancies himself as quite the hipster … if it would keep him in Parliament he’d sell his grandmother.” She believes that Dunne or Maurice Williamson were the only two MPs who could have jumped to the Internet Party, and firmly denied to me that it was her who was switching. I never really believed that anyway, as I’ve been told that it was a group of Young Nats who decided to promulgate that rumour.

Cheese rolls were next on the agenda (how could it be anything else), so we headed to a pub opposite the Labour office to indulge. I joked that it could be considered treating to pay for my cheese roll and flat white, and Clare just gave me a sly look. She ordered a large sauv.

Once we sat down, I asked her a bit more about other MPs. In answer to “who’s your least favourite,” she responded first with “John Key,” then paused and elaborated with “Chris Finlayson,” because he’s “nasty.” She also commented that “some of the National Party backbenchers are a bit suss.” The conversation shifted slightly to what goes on that we can’t see on Parliament TV, and she noted that there’s a lot that doesn’t go on camera. “Jami-Lee Ross’ homophobic comments to Dennis O’Rourke,” which Clare was disgusted by, are an example of this, and we wouldn’t know it, but Maggie Barry has a “foul mouth.” Clare has only been asked to withdraw a comment once, and that was when she said the Government has no courage. She said it was part of an allusion to The Wizard of Oz, insinuating the Government has no courage, heart, nor a brain. There were a few chuckles at that one.

It was at that stage a few extra Labourites slipped into the bar, bringing our little chat to its conclusion. I enjoyed spending an afternoon with Clare, if only to finally meet the woman behind the Twitter account. Despite her nonchalant attitude and hilarious tweeting habits, she genuinely wants to help her electorate. This is a quality that is extremely desirable in an MP. If you want to have your own chat, I’m sure there’s a clinic you can attend. Watch out for the Labour caravan and come with a cheese roll or two.
This article first appeared in Issue 14, 2014.
Posted 1:08pm Sunday 6th July 2014 by Carys Goodwin.