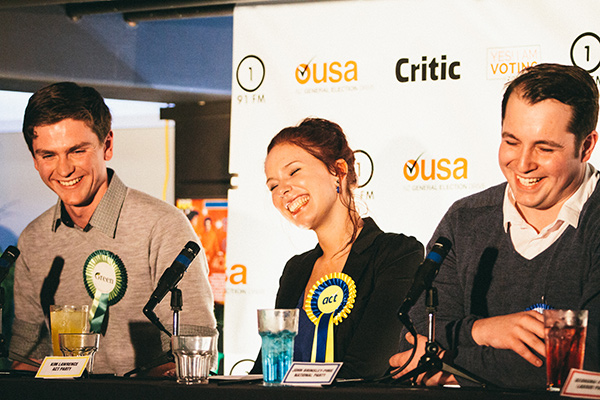 On Monday 8 September, Critic hosted its own version of Back Benches with Wallace Chapman. Last week’s politics section was dedicated to introducing the participants, who were young politicians from across the spectrum; this week looks at the most hilarious quips and quotes offered by Wallace, John (National), Georgina (Labour), Patrick (Greens), Kim (ACT), and Jordan (Internet).

The evening covered five main topics: the proposed DCC alcohol changes; the living wage; tertiary education; social media; and Dirty Politics. It was accompanied by themed cocktails, of which my personal favourite is “the ALCP,” which was BYO. Politicians of all walks crowded onto the sofas at the front, and the heckling reached outstanding highs.

Wallace: “Good to see MPs here like Metiria Turei, Clare Curran … who else is there? Colin Craig? No? Good.”

Wallace: “Why is Colin Craig so great?”
Jonathan Daley of the Conservatives: “If the policy doesn’t stand for anything, there’s integrity.”

Wallace to Kim: “You’re drinking the Three Strikes, is that right? How is it?”
Kim: “It’s tough.”

Wallace to Jordan: “Describe Kim Dotcom in three words.”
Jordan: “Larger than life.”
Wallace: “Tweet the fuck out of that.”

Metiria Turei: “We should control the [alcohol] industry and stop trying to control young people.”

Patrick: “We think there isn’t such clear evidence to suggest that jobs do get lost when minimum wages get introduced. The US treasury launched an investigation and couldn’t come up with any conclusive evidence …”
John: “So where Patrick’s right in saying that in the US the links aren’t as clear, but the US also has a much lower minimum wage to average income than we do. Where it’s a little bit more clear is where you raise the minimum wage, say, in couple of years’ time to $18, you do put a restraint on employment. And, sure, it’s not one of those things that’s clear cut, and you go, you’re going to put $18 and bam there’s unemployment, but it is something you have to start carefully balancing in saying well, at some point, employers will not be able to pay that wage.”

Wallace: “Let’s go to John then, you’re in government. What do you say to that?”
John: “I’m not in government.”
Wallace: “Not you! Shit bro, you know what I mean.”

Kim: “ACT would like to put interest back on student loans.”
Wallace: “Interest back! How much?”
Kim: “Presumably at a market rate. Perhaps like in Australia; index to CPI. ACT believes that students are the future highest earners in the country, and that as they’re the ones who personally are going to immediately benefit from the university education, they ought to bear the costs and make informed decisions when deciding to undertake it.”
Wallace: “Okay, alright. There’s a clap, let’s go over here. Do you have a student loan?”
Audience member: “I do, and I don’t necessarily agree with Kim, but I was just being supportive.”

Jordan: “I don’t blame National for not understanding why education is important when you have a system that doesn’t give you a proper education.”

Wallace: “At quarter past five, four Wednesdays ago, a book came out … and fuck it exploded. Boom.”

Wallace: “If you take away Team Key, what have you got? Judith Coll– no, she’s gone.”

Wallace: “Hands up someone who really does not fucking like John Key, who hates him. Go, you. John Key hater coming up. What’s your name?”
Audience member: “Bill.”
Wallace: “Why do you just not like John Key?”
Bill: “’Cause he’s a sleazy, corporate dog.”

John: “Wallace, I’m actually really interested. ‘Cause I actually quite want to know, and I know there’re Internet MANA guys in front of me who keep scoffing; I’d really like to know why John Key is so popular? Is half the country deluded, or is there another reason?”

Wallace: “What’s your name again?”
Audience member: “Sabrina.”
Wallace: “Come up here, Sabrina. All right, okay. What do you think of John Key?”
Sabrina: “My friend says that he has dead eyes.”

Wallace on Dirty Politics: “Who’s read it? Surprisingly few, about 18-20 people.”
Audience member: “Yeah, we have too many other readings.”