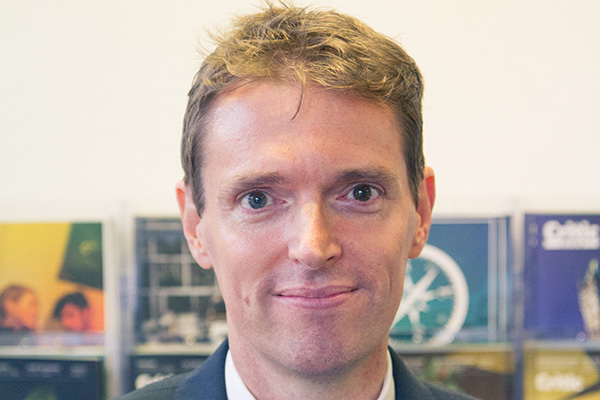 The messiah of the right

Otago welcomed an unlikely guest the week before last: Colin Craig, leader of the Conservative Party. His visit was a flurry of interviews, including a much-anticipated appearance on Vote Chat, and I was lucky enough to spend a bit of time with the thoroughly intriguing man. Social conservatism doesn’t tend to be the name of the game for students in Otago, and Craig has often appeared in the media for ridiculous statements; for that, I wasn’t entirely sure what to expect. As it turns out, he’s actually extremely personable, was very interested in the general mechanics of Critic, and willing to answer whatever I threw at him – including a “shoot, shag, marry.” We chatted for nearly half an hour, so this page features the best bits of the interview. The rest can be found at critic.co.nz/colin.

While we’re on record ... I want to be guaranteed that you’re not going to sue us for defamation.
No, that’s fine. That’ll be a no.

This is a university, we have a lot of students, and I’ve scoured through your website, and I can’t really find much on tertiary education. So I was wondering if you could just lay out for me where you sit on student loans and allowances in the tertiary sphere?
The reason we haven’t put our policy out on it is we’re still fine-tuning a couple of the points. We will have a tertiary policy for the election. We’ve made some public comments already, so a couple of the key things we’ve said: first of all, we’ve said that a system that sees the student get indebted, the government get indebted, and the university get indebted, clearly isn’t sustainable in the long term, and that’s the system that we currently have. And there are a couple of reasons for that. One of the reasons that I see as a problem is we’ve taken a very broad approach to universities now, whereby we fund bottoms on seats, and we say this is all about getting the maximum number of people through.

Yeah. So what about in terms of loans and allowances? ‘Cause that’s always a hotbed of discussion here.
Yeah, we don’t think we’ll be changing a lot in terms of the allowances side of things, but I think the problem we’ve got is that the current system basically gets everyone indebted … So our goal, ultimately, is to find a way to make higher education fully funded, at least for some. And one of the routes this might work quite well is to, instead of making it a straight-after-school experience, bring education much closer to work, so that it’s more of a continuing education, it’s more of a process of … get[ting] a job and as part of that job, and as part of professional development, the education is a little more integrated to life experience.

Yeah. So you’d promote, perhaps, subsidies for students who have jobs while they’re trying to learn and that sort of thing?
Yeah, that’s right, and working with employers and saying, look hey, if you upgrade your people, now they’re in a field – I mean a classic discussion is around nursing, you put people through nursing degrees, and they realise they don’t actually like nursing when they actually get out and do it. Far better would be to actually introduce people to the practice, get them practically underway, and then say, okay, now let’s get your bachelor’s degree around nursing.

The thing is, though, how are you supposed to get a job if you’re not qualified?
Well I think the thing is, you know, a university degree doesn’t guarantee you a job. The current situation we have is there is not a big difference in New Zealand, and I think this is an important issue, between having a university education and not.

Today a youth-led organisation called Generation Zero have just released a policy report that says that they’re calling for clean energy. In the past you’ve been quoted on a few things regarding climate change, and I was just wondering if you stand by your argument that it’s not human-caused?
Oh no, I’ve always said human activity does influence climate, but it’s a minor influence. Not the major influence. The major influence, in my view, and far away the biggest influence on us, is our sun. I mean, it’s the biggest influence on our climate, seasons, climate change and effect, because we’re a slightly different distance away from the sun. But I find the most productive thing is to say, let’s tidy up and let’s clean up our environment … And I would much prefer to spend time and energy on environmental issues where we deliver an absolute result that can make a difference in people’s lives than to talk about an emissions trading scheme, which is very remote – [it] isn’t changing anyone’s behaviour, actually. And I think until we get countries like America and China on board we’re dreaming if we think we can change the climate.

What about renewable energy? I mean, you talked about the sun, you know, if it’s causing climate change, then it can also cause the energy …
I mean, look, the sun’s a wonderful source of energy and I think looking at renewable sources of energy makes a lot of sense, and for us as a nation, most of our energy is hydro, which is a renewable source, and it’s seasonal, and that’s one of the problems. I’m not a huge fan of wind generation because it’s not economic, but I think some of the things we can do, basic things we can do, that make a lot of sense, are what if we took all of the water heaters in all of our houses in this country and changed them to heat transfer systems, which saves about three quarters of the energy in terms of heating homes. Now that’s a huge difference. And it’s economically viable.

So if you could name a party in government that you’d closely align yourself with on the environmental standards?
There are some areas here where we could definitely work with the Greens, for example, we couldn’t work with them on other areas, but when it comes to cleaning up New Zealand’s rivers? Absolutely in the same space.

You said a couple of years ago that kids sent to school without lunch should go without, and regarding the talk recently with different policies and how our child poverty problem is going, do you stand by that?
I don’t remember saying that, I know that we’ve said it’s the responsibility of parents, and we should be making the parents step up, and I certainly stand by that. And I think there are some good examples of it where if you ask and expect parents to do more, they will, but if you give them a free pass, if you say ‘”you know what, we’re going to provide lunch at school,” I believe many parents will make the choice not to supply lunch to their child.

People still live below the poverty line, though, and there’s no way to guarantee that any parent will be a good parent. You can introduce all these consequences, but there will always be people who slip through the cracks, so I’m just wondering how you can say “no, we won’t support children getting lunch in schools ‘cause everyone will do it and that’s a bad thing.”
We want every child to have a lunch in school, but that process surely has to go back to the parent, and say to the parent “your child didn’t have a lunch today, we had to feed your child, and so you now have less money in your dole or in your benefit, or if you’re not able to supply, then clearly you haven’t taken advantage of the support we can give,” because the support in this country is generous.

So you think if people don’t have the resources to feed their children then it’s their fault for not taking the benefits?
Well if they’re not taking advantage of the benefits that are there, then they may well struggle to get by. I accept that, I don’t think the minimum wage in NZ is enough to get by on, and we know that because most people on the minimum wage have to get subsidised by the government, particularly if they have children, and so I think there are some issues around general affordability, and I don’t think that the right answer is to actually build some enormous welfare state.

We’re sort of starting to run out of time here, so I’m just going to move onto a few, you know, Critic-student-media questions. What’s your favourite conspiracy? The moon landing?
No, no, see I don’t … this is the thing, I don’t answer conspiracy questions because I don’t know them very well. But I think, and I wouldn’t have a clue about it, but I think the whole JFK thing has a lot of mystery attached to it. I mean, everybody talks about it, I have no idea what the conspiracy is, but I’m sure it would be exciting.

One last question. This one you have to answer. Shoot, shag, marry: Jacinda Ardern, Judith Collins, Metiria Turei.
And that’s a question?! Okay … I’m trying to look for some similarity between them but all I’m finding is a whole lot of differences. Um … okay, don’t know Jacinda Ardern, but she and I have a few disagreements. Definitely not marry. Judith Collins? Errr, don’t know. Metiria Turei? Time for celibacy. Have you got that down there as an option? Monkhood or whatever they call it.

You can only shoot one! You’ve got to marry one and shag the other.
Look, that’s such a tough question. I should consult my wife on this one. However, I will go with the following order: I’ll shoot Judith Collins ‘cause I think she’s tough enough to take it; um, shag, well, aw gee, nobody, ‘cause I’m married and it’s not an option for me; and, um, marry, again, it’d be problematic, but let’s say my wife died, and I had to re-marry. Who’ve I got left? Jacinda Ardern and Metiria Turei.

But if your wife died, you’d have to shag one too, ‘cause you’re out of the whole marriage thing.
Yeah, no, I don’t know if I want to go there. Um, I’ve shot Judith Collins ‘cause I think she can take it. Metiria’s the one with the nice jackets, eh? Yeah. Fashion, yeah, good. Marry. By default, that’s not looking good, is it? But I’ll leave it at that.