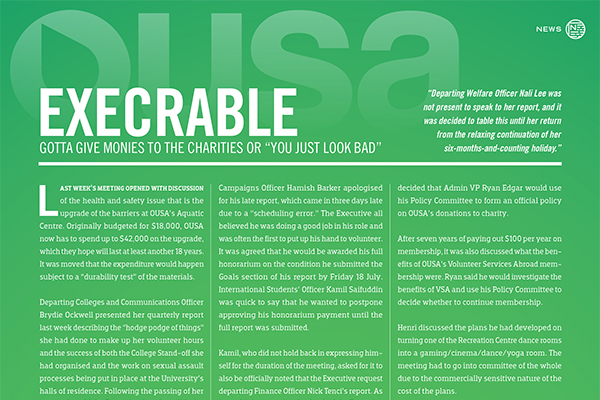 Gotta give monies to the charities or "you just look bad"

Last week’s meeting opened with discussion of the health and safety issue that is the upgrade of the barriers at OUSA’s Aquatic Centre. Originally budgeted for $18,000, OUSA now has to spend up to $42,000 on the upgrade, which they hope will last at least another 18 years. It was moved that the expenditure would happen subject to a “durability test” of the materials.

Departing Colleges and Communications Officer Brydie Ockwell presented her quarterly report last week describing the “hodge podge of things” she had done to make up her volunteer hours and the success of both the College Stand-off she had organised and the work on sexual assault processes being put in place at the University’s halls of residence. Following the passing of her report, she told the Executive that she will “miss you guys” but will be sure to “whip the next Colleges Officer into shape.”

Departing Welfare Officer Nali Lee was not present to speak to her report, and it was decided to table this until her return from the relaxing continuation of her six-months-and-counting holiday.

Postgraduate Officer Kurt Purdon said he had “really enjoyed” the second quarter of his term. His report outlined the support he had given to the organisation of Otago University Postgraduate Society events. He raised one issue he aims to address, which was that honours students, particularly BA honours students, felt like they were missing out on the extra resources usually available to postgraduate students, saying they “effectively are postgraduate students but not treated as such.” His report was passed.
Campaigns Officer Hamish Barker apologised for his late report, which came in three days late due to a “scheduling error.” The Executive all believed he was doing a good job in his role and was often the first to put up his hand to volunteer. It was agreed that he would be awarded his full honorarium on the condition he submitted the Goals section of his report by Friday 18 July. International Students’ Officer Kamil Saifuddin was quick to say that he wanted to postpone approving his honorarium payment until the full report was submitted.

Kamil, who did not hold back in expressing himself for the duration of the meeting, asked for it to also be officially noted that the Executive request departing Finance Officer Nick Tenci’s report. As it was his last meeting, he thanked the Executive for enabling a “healthy and warm relationship.”

The Executive then discussed their standing on requests by charities to donate money. Hamish pointed out, “you either give them money or you just look bad.” It was discussed as to whether there should be a charity fund on top of the time the Executive donates towards volunteering or whether OUSA money should purely be spent only on directly servicing students’ needs. It was decided that Admin VP Ryan Edgar would use his Policy Committee to form an official policy on OUSA’s donations to charity.

After seven years of paying out $100 per year on membership, it was also discussed what the benefits of OUSA’s Volunteer Services Abroad membership were. Ryan said he would investigate the benefits of VSA and use his Policy Committee to decide whether to continue membership.

Henri discussed the plans he had developed on turning one of the Recreation Centre dance rooms into a gaming/cinema/dance/yoga room. The meeting had to go into committee of the whole due to the commercially sensitive nature of the cost of the plans.

It was noted that OUSA has out-dated and failing accounting software, which PwC described as “a ticking time bomb.” It was agreed that $20,000-$40,000 would be spent on an upgrade.

It was also pointed out that following Critic’s coverage of the last Executive meeting, it was important that the Executive members and students know the key differences between full-time OUSA staff and Executive members’ roles. It was noted that the Executive can be, and should be, “out there prospecting for student opinion.” Networking with students was a key element of the role and something that could easily be done to make up any unaccounted-for hours. Students should also know that approaching the Executive is the best way to have your issues addressed.