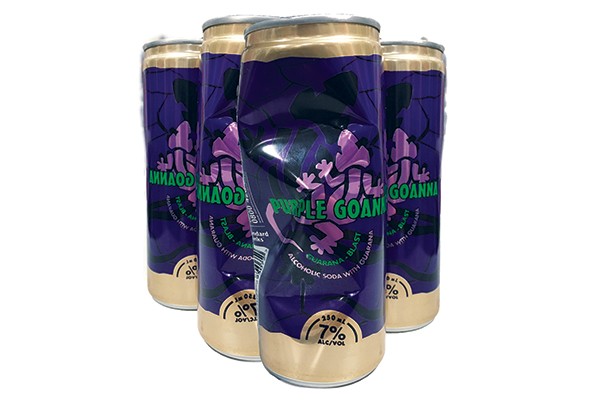 Purple Goanna spits in the face of all that is holy. An artificial potion of methylated spirits and dirty chemicals, this RTD has inflicted a pain on the youth of New Zealand that even Suzie Cato could not fix.

The flavours are indecipherable. With the deep purple hue of the liquid, one would assume it would be grape flavoured. It’s not even close. It just… purple flavour. It’s a mixture of sugar, paint thinner, and something weirdly metallic.

Purple Goanna is mankind laughing in the face of God, standing up and declaring our freedom from the natural world. We have created something so vile, so artificial, that it is no longer recognisable as coming from God’s green earth.

This column is not just about the taste though; it’s about the experience. After closely pondering the symphony of taste contained in the first can, I proceeded to punish the other 11, and wake up in a cold sweat. My heart was rushing; it felt like it could give out on me at any second. I stumbled to the toilet to find out that my urine had gone a discoloured orange. I have heard legend of the Purple Gs turning your booze poos green, but I didn’t stick around to check.

Purple Gs do build up a fucking rapid head of steam, and the initial sensation is of a woozy gigglyness, which I haven’t felt since I was an underage kid at my Year 12 afterball (i.e. the target market). That immediately develops into feelings of regret, around the 4th can, and dread at the 8 more in front of you. My legs felt an unnatural weight, like my body was telling me to give up and go to bed. I did a delightfully purple coloured vomit after the 10th vessel, which was probably the only highlight of the night.

For the incredibly brave and/or stupid, my editor Lucy tells tale of the mythical ‘Tuatara’, served exclusively at the seediest of Gisborne bars – 50% Tui, 50% Purple G, 100% pain and misery.

By the time it was over, I felt shame, not only in myself, but in my family. I think my mum would have been prouder of me if I told her I was on meth than Purple Gs.

Pairs well with: Hard drugs, ballet dancing, yelling at children, passing out with your pants still on

Froth Level: Far too high to be safe