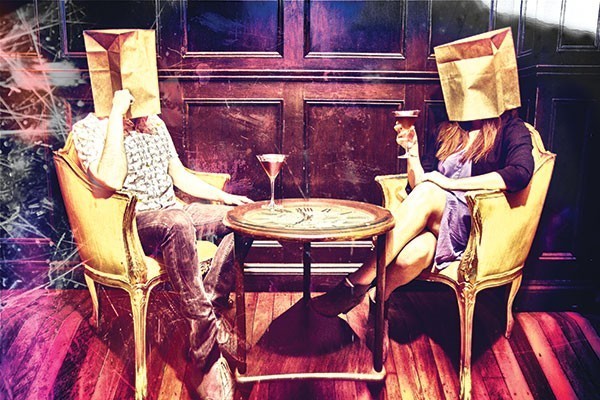 He might have gotten with her friend before, but we’re holding out for a romance.

I signed myself up for this partly due to a dare and partly due to a promising that I would do it in first year. Anyway, I dressed up to look classy, had a beer (or 5) before I got there, and arrived 10 minutes early. We ended up having a great yarn with the bartender (who knew that having wine on tap was a thing?) while I was waiting for her to show up. I was terrified that I would be set up with some 18 year old fresher. You may be old enough to drink and vote, but you’re still children.

The bar patrons were more nervous than I was, with one asking me “What if she walks through that door and she’s fat? What will you do?” Finally, this lovely blonde girl walked in about 20 minutes late (how rude), and I did not need to worry about her being ugly or fat. The conversation flowed well, and we talked about all the things you aren’t supposed to talk about on a first date (religion, marriage, etc ...).

After the bar tab ran out, we headed off. I went in for the cheeky kiss on George St, and that later turned into a makeout session outside the museum. Sorry to the passers-by. She wanted to go home, so I walked her most of the way (her choice). Since it was early, I went back to town, got hammered and bought lots of random people drinks. Damnit. A cheeky Facebook stalk informed me that I had previously banged one of her friends, so this may not be that successful in the long run. Sadly there are no more salacious details. I let you down.

Cheers to Critic for the date and to Di Lusso for being awesome.

She names her boobs Mary-Kate and Ashley. The Olsen twins got some love.

Naturally I rocked into this date a bottle of wine deep with the idea that I’d be matched with this hella-basic 19-year-old UniCol male. Safe to say he was the opposite, he was 5th year law in a bloody suit and tie! I’m pretty sure he even quoted a philosopher at some stage, which I’m not gonna lie was over my drunk ass head.

The wine and food was mean and flowed with the conversation. When the bartender tried to take away the platter, I swear a low growl came out. My date then bought us three shots each and that was me for the night: I was well and truly gone. I vaguely remember him taking me to Boogie - a decision I had no part in making. It was becoming obvious I needed to head home so he walked me and we had a make out sesh for a bit; this involved escalating to him lifting up my top and bra and exposing Mary-Kate and Ashley casually outside the museum. He then proceeded to whisper “the things I would do to you” in my ear.

As soon as we parted ways, I slipped on the ice and cut open my knee. #gobbyknees. Was a good night, he’s got my number, and he knows where to find me. We’re hoping for a spring wedding.