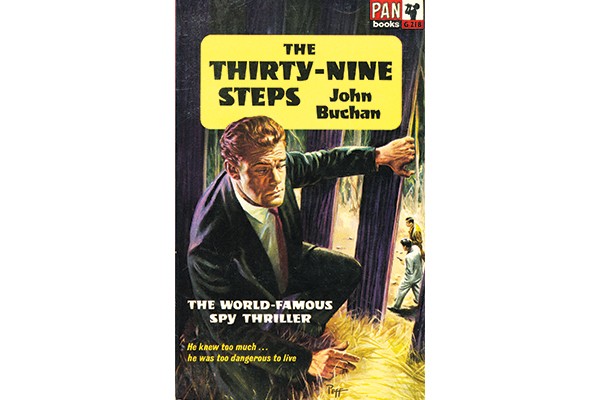 Written at the start of the First World War while John Buchan was bedridden by illness, The Thirty-Nine Steps is a classic of the crime fiction genre. It stars Richard Hannay as the archetypal action hero. Returning from Africa after several years working as a mining engineer, Hannay intends on transitioning into a quiet and respectable society life. However, his dream is unexpectedly interrupted one night with the arrival of a man who claims to be dead. The man, Scudder, has just faked his own death in order to escape the agents of a spy ring known as the Black Stone, who intend to assassinate the Greek premier, Constantine Karolides, during his visit to London. What follows is a classic game of cat and mouse, a captivating chase that traverses the Scottish moors and sees Hannay employing disguise and deception to evade his enemies as he seeks desperately to reveal their plot before it is too late.

The Thirty-Nine Steps is a short but invigorating read, clocking in at just over 100 pages. As such, the plot moves quickly and the action is intense. Buchan’s novella provides excitement in bucket loads, truly involving the reader in the action. Imbued with Buchan’s simple, evocative style and masterful manipulation of tension, the character of Richard Hannay comes to life, with his fear and exhaustion seeming to emanate from the pages. For the experienced crime fiction fan, there is a lighthearted fun in seeing many of the traits found in later heroes embodied in Hannay. The same is true for new readers, as the novella is perfect for dipping one’s toes into the world of crime fiction, being ideally suited to a lazy afternoon’s reading.

All in all Buchan and Hannay’s adventure remains fresh and interesting over 100 years after it was first published.