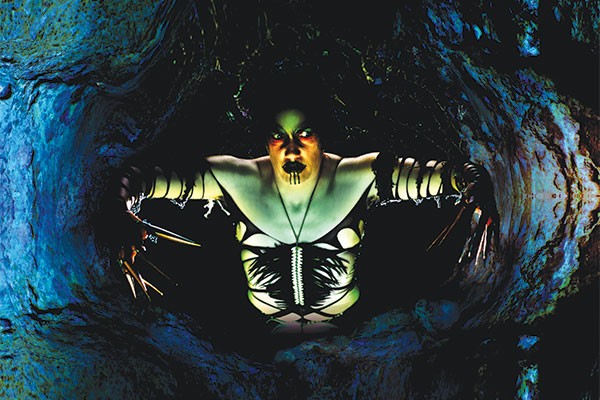 Take the opportunity to view some work from one of New Zealand’s current 'it' artists, Lisa Reihana. Milford Gallery are showing a range of her magnificent staged photographic portraiture work.

Distinct themes of mythology and colonisation run through the Māori descended Reihana’s oeuvre. Her contemporary style fuses with technical skill to produce her spellbinding images. The size of these works (around 1500mm square), adds to their mesmerising effect.

This exhibition has three works from 2007: 'Diva', 'Urban Warrior' and 'Ranginui'. The earlier 2001 'Kurangaituku' is a particularly well imagined portrayal of this fantastical and fearsome bird-woman from Māori mythology. These are some of the last of this range of work available for private sale.

Reihana’s 'Ngā hau e wha’ series, 2009, expressively depict the four winds. The immaculate make-up, gorgeous costuming, and jewellery add to the strength of character of these poised feminine renditions of the individual winds.

However, it is the puzzling 2010 'Pelt’ series that are especially captivating. I’m told some men are uncomfortable viewing these enigmatic naked women. They are definitely unearthly, ethereally existing in an icy purity of space yet casting shadows that tell us they are corporeal beings. They carry a sense of supernatural eroticism and are imaginary beings with their additional feathers. Almost as imaginary are their names, 'Aquila', 'Sabin', 'Pilosusa' and 'Camarillo' only two of which I could find some derivative for. I wonder if Reihana was playing with what is known as the Kinnara from Hindu mythology who are half-bird creatures from the mountains who watch over humans. But there could be many takes on 'Pelt’.

Reihana is particularly of the moment as she is to represent New Zealand at the Venice Biennale in 2017 with her 'Pursuit of Venus [infected]', 2015. Her first, somewhat smaller and shorter version of this, can currently be seen at the Hocken Library. 'Pursuit of Venus' patently comes from Cook’s voyage to observe the rare transit of Venus with the covert imperial mission of fantasy to find Incognita - the unknown southern land. Our Hocken 'Pursuit' is pre-colonialism whereas 'Infected' is post discovery.

Lisa Reihana’s portraiture works are beautiful images to be enjoyed and contemplated. You may not be able to afford to buy one, but you can appreciate them while this exhibition is on and view some of New Zealand’s very contemporary photographic based art.