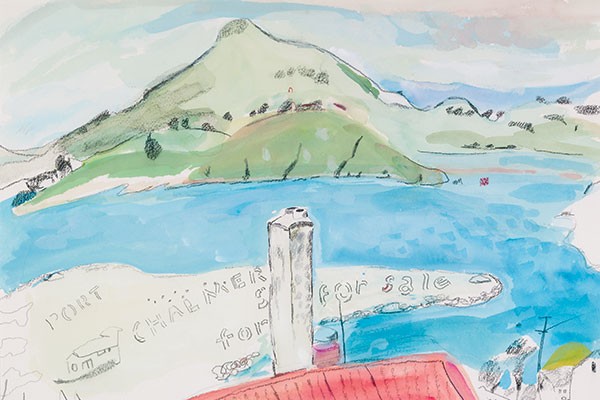 Picture/Poem: The Imagery of Joanna Margaret Paul & Cilla McQueen is an exhibition centred on friendship. In its intimacy, its cleverness, and its written and visual imagery of Dunedin, the experience of the show is moving.

Although both artists traverse disciplines — the exhibition undoubtedly emphasises this — Cilla McQueen is known for her poetry and the late Joanna Margaret Paul for her painting (and photography).

With ink self-portraits, bits and pieces of written and art works about Dunedin and details of their lives inside their homes and studios, walking through the exhibition is almost like scrolling through a shared blog made by two friends who have an inexplicable creative connection. It’s an invitation into their shared world.

At one end of the gallery is a set of music stands with printed words flowing and echoing across the pages of the books that rest open on them. McQueen’s voice reading her poetry rides along an eclectic mesh of music and sounds. On the opposite side of the gallery is a series of Paul’s watercolours, which feature jars, flowers in vases, and table tops, lines of poetry written onto their surfaces. In the middle of the space, the two personalities seamlessly interweave.

Examining their works — the imagery, their love for words, the spaces in between — and their backgrounds, it’s difficult not to imagine the two being part of an understated-cool scene when they met in Dunedin in the 1970s. The two had their regular jaunts: the Globe Theatre, Dawsons Gallery (run by Maureen Hitchings who married Hocken Librarian Michael Hitchings — a painting of the couple is in the show) — and Red Metro. They both had artist husbands: Paul was married to Jeffrey Harris and McQueen to Ralph Hotere. In New Zealand’s cultural history, here had been a small community of great artists.

While Hotere and Harris may be more recognisable names, neither McQueen nor Paul was subservient or naive to male privilege or the firm establishment of the patriarchy within art institutions and communities. By consciously making work that reflected their personal experiences, the two were part of the prevailing feminist movement.

In the paintings and poetry of Dunedin’s locations, like Carey’s Bay, Port Chalmers and Aramoana, the show also generates either a nostalgia or fondness for Dunedin — for sun-glossed winter days spent walking the hills that enclose the harbour, for looking out across the water on a warm evening, or even for encounters with the handful of quirky, sometimes dark, creative communities nestled throughout the city that seem somehow different to creative communities elsewhere. “I like the darkness / inside our Dunedin houses / even in summer, the doors / that open into the hall, the / front door that opens into the sun”, McQueen writes in a poem titled “Joanna”, evoking the charming side of some of those old, damp homes we have all flatted in at some point.

Picture/Poem is an insight into a wonderfully articulated conversation between two artists. Although it contains works by two distinct personalities, the way the exhibition flows together shows how the two friends undoubtedly influenced and supported one another. Not often can an exhibition transform into an experience that is at the same time clever, engaging and filled with a sense of love and care.