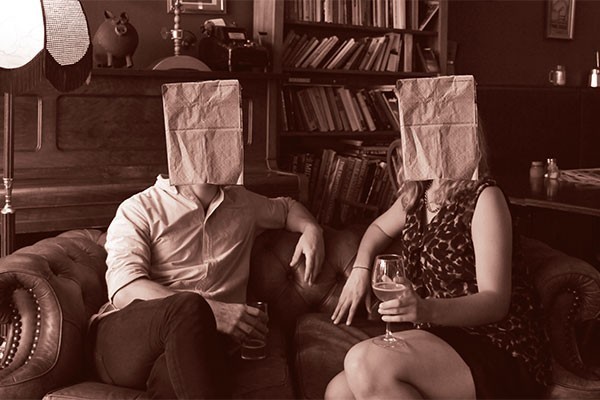 After being nominated by my flat mates and receiving a surprise invite on a blind date I was thrown in the deep end, but the appeal of free food and alcohol ultimately drew me in.

I was subjected to what was essentially a makeover by my flat mates and downed the better part of a bottle of wine before heading out. I was looking pretty hot, makeup on point and cleavage out, I’m not sure if it was the alcohol, but the nerves were slowly dispersing. Naturally on arrival I ordered a whiskey and dry before being directed to my date.

To my surprise he was tall dark and handsome, had great chat and was actually pretty intelligent. Nice change from the usual fuck boy. We got on like a house on fire and I actually got pretty comfortable, turns out this blind date thing isn’t so bad. We continued to drink our way through the bar tab, and when we were both sufficiently drunk he asked me to dance.

There was a cute jazz band playing, or maybe it wasn’t jazz, anyway it sounded good and he took the lead. We were admired by the other patrons and I was definitely impressed by his moves.

Things started to heat up a little from there. I noticed his hands wandering over me as we danced, and I couldn’t help but stare into his beautiful blue eyes. We finished the rest of our drinks and then headed out. It was really nice of him to pay for our taxi back to mine.

Thanks for the great night Critic!

His - Not a fuck boy

After receiving a message at 6:30 on Thursday, I realised the situation must be dire so responded to the late call up with a shrug and a positive attitude. An hour and 10 minutes later, after a shower and a bottle of freshly picked Shiraz, I found myself wandering toward the Octy hoping for a hottie.

Despite turning up about 10 minutes late it appears I had won the race, shooting a quick look round no one was sitting by themselves. Weaving through a small crowd of people to get to the bar, my first impressions were we had lucked out and had stumbled into some sort of retiree convention. However after quick chat with the bartender I realised they were in fact the resident jazz band, and in fact as old as jazz itself.

Most of the tables were full so I parked up in the window seat just as the date arrived.  With a quick peck on the check and a wee how’s your father my nerves started to settle. While she grabbed a drink at the bar, the jazz band kicked into action with a classic that had me tapping my toes like Michael J Fox.

The food was nice, mostly chip and dip type stuff and the majority of the bar tab went on craft beer and whiskey, reasonably hard case. The chat was good and revolved mostly about dinosaur bones, but there were a few jokes exchanged providing for a lightening of the mood. A dance floor soon appeared but it looked quite full, so we both decided it deserved a wide berth.

We finished the bar tab off with another round of whiskeys and decided to go for another in the Octagon. On arrival there it was pretty dead so I gave her my number and with the promise of a txt we parted ways