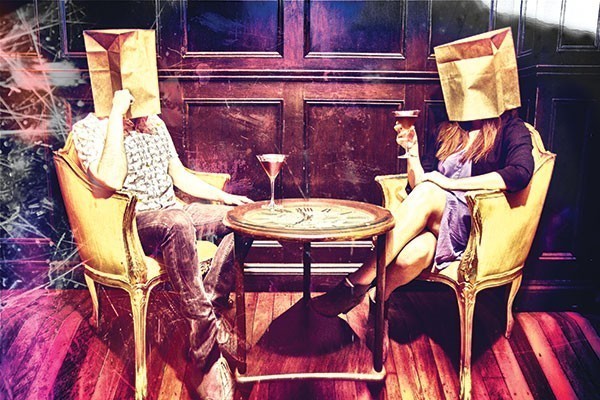 He shares a room with another guy, but impotence is his real problem.

I geared up for the night with the standard preparation, cheeky pre drinks and some quality banter with the flatmates. Once I’d had sufficient liquid courage, I decided to head to Di Lusso with the encouraging “don’t be a fuckwit” farewell from the lads.

I figured getting there on time would give a good impression but after waiting for 15 minutes I tossed up the possibly that I would be that guy - the one that gets stood up. Luckily she finally turned up in a somewhat drunken stride. After sharing a “not bad at all” look with the bartender we ordered some drinks and got to it. Watching her try to keep her shit together at the start was rather entertaining but it took a few minutes to get the conversation flowing. After that it was smooth sailing. We covered all the exciting topics, sport, family, uni, drugs and even discovered a mutual dislike for health science.

Somehow we barely touched the platter and she was happy to avoid cocktails to help stretch the bar tab. She even agreed to switch from lemonade and vodka to CC and dry (GB). After downing a few more drinks we left Di Lusso and ventured to my flat. We walked in to find a few of the flatmates who were on a very similar level. This lead to a game of beer pong, guys vs girls, which I’m not proud to admit that we almost lost. Once the flatmates went to sleep we drank some red wine and smoked some narcotics to the sensual sounds of Ne-Yo - a pretty romantic scene it was.

Like every normal 22 year old, I share a bedroom and, in showing a great lack of faith in me, my roommate decided to sleep in our room instead of at his girlfriends. So we headed to her place, which happened to be in the same complex that I lived in last year. What followed was some alcohol and marujuana-induced intercourse, which was supported by a strong case of whisky dick. Not to worry, we got there in the end.

The next morning we parted ways. I enjoyed some nostalgia bought on by the complex surroundings and embraced the hangover to come. Top quality girl, good chat and the looks to match.

Loves exercise and partying but says one is to the detriment of the other. We think she’s not quite as familiar with partying as exercise.

I only have two hours of class on a Thursday. I had plenty of time to anticipate the date, yet I put it off to the last possible moment to even consider making myself presentable. I was maring in the kitchen seriously considering standing up the poor guy, so my flatmate forced me to throw back several shots of vodka in ten minutes before offering to drive me to the venue. We looped around the block going 5km thinking every lone male was a potential before I had to face my doom.

As I crossed the street to Di Lusso, I realised I had jelly legs thanks to alcohol (not nerves this time). He was sitting at the bar, all dark haired and stuff, but I can’t tell you much about his face because I was so pissed at this point I didn’t know what was up or down. I was seriously starting to question my life decisions, being unable to string an actual sentence together. The connection from my brain to my vocal cords appeared to have severed so as a result I looked like an awkward idiot. Moral of the story: don’t drink so much in ten minutes.

When I finally was able to think semi-straight again, banter flowed. He was chatty, easy going and cute. Not my type but never say never. We retreated to his flat and after consumption of red wine, games of beer pong, and a few cones he told me someone was ‘staying’ in his room. I was pretty shit-faced so I offered the luxury of my bed. After breaking into my own flat, we took a wee tumble in the sheets. Unexpected but a rather satisfying end.

Cheers to all involved for a night I will laugh about for the rest of my life.