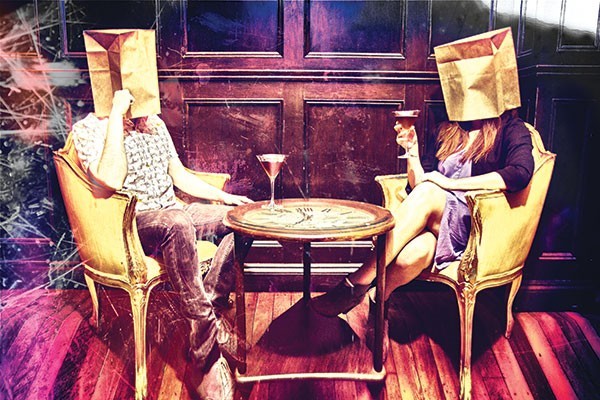 Commerce kid with lots of goodies. We wish him all the best.

After being set up for the blind date by my flat mate, it came as a surprise that the Critic editor promptly emailed back saying “are you free tonight?”.

Despite it being my night to cook dinner in the flat, I ‘summoned the courage’ (4 beers and 3 shots of vodka) to head to Di Lusso at 7pm to meet my date.

After being dropped off fashionably late bearing gifts and wearing my tuxedo. I walked in expecting some kind of Frankenstein’s monster. To my surprise, I was greeted by an absolute beauty.

She was rather shy and tried to keep the spotlight on me, but I just wanted to know everything about this fine specimen. We ordered some cocktails to lubricate conversation and it wasn’t long before we got to know each other very well.

The conversation topics became more and more intimate ending up with me explaining that “…I don’t do romance… My tastes are very singular…”. I thought that she wouldn’t understand but she was intrigued, and timidly stammered: “enlighten me then”.

Needless to say we didn’t spend much more time at the restaurant. We headed straight back to mine, and after downing more vodka in my room together, we then started to become far better acquainted…

The clothes were quick to come off, and after a little bit of passionate kissing we were in my bed and sparks were flying. After we were comfortable, this sex romp became far more interesting.

I opened up my sock drawer and revealed to her my elaborate assortment of toys and restraints. She looked shocked but also somewhat excited. I tied her down with the cuffs and used the gag. We enjoyed a night full of filthy and tormentous sex. Once we were both absolutely spent, we slept and then the next day she left back to her flat. We have exchanged numbers and if I play my cards right we might indulge in another wonderful night sometime soon.

She needs to learn the game. What an opportunity.

Being roped into this wasn’t what I had planned for my Wednesday night. I arrive fashionably on time, and he wasn’t there. Classic.

After stumbling across a Yik Yak from my date the day before, “will anyone pay me 100 dollars if I took a dead possum down my jacket and told her I did my own taxidermy”, the expectations I had for my date’s appearance were substandard.

To my surprise he wasn’t horrendous, and was actually pretty decent. However, he showed up in a tuxedo and dropped numerous gifts at my feet. I was confused.

He was polite, intense, smart, really intimating. I asked what he liked to do outside of uni? He just looked at me and asked ‘I just want to know more about you’. After I told him there’s not much to me, he claimed that ‘he liked to exercise control on all things’.  I thought to myself...this fucking loser is trying to recreate 50 Shades of Grey. I decided to play along.

He would ask me questions like ‘do you do romance?’ After I answered he kept giving me gestures that implied that I should ask him the same thing?. . . “uhhh do you?” He began to tell me that his tastes were very singular.

I thought it was funny, until when he showed me inside his bag, there were copious amounts of different objects that he had reconstructed into sex toys. I decided to call it a night and head home. Even though I knew he was taking the piss, which actually resulted in a fun night, I didn’t quite know if he was kidding when he said he wanted to tie me to the fridge and plough me with a banana.