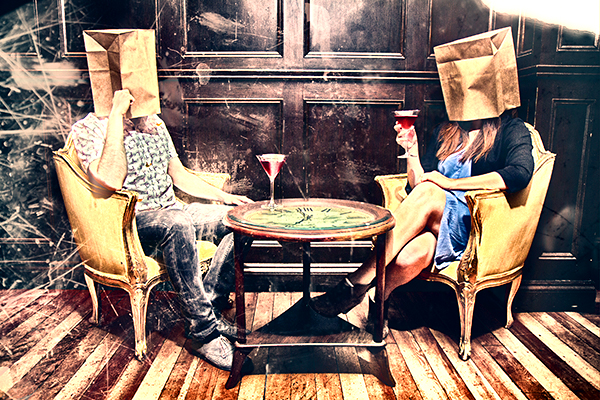 Whoever I replaced, you got lucky.

I got a call from Critic and was asked to replace the girl that had canceled. Boy, was I excited. I mean, it’s Thursday night and I get drinks for free. What more can you ask for?

I arrived early and had a shot with the bartender. After a nice chat, my eyes wandered off in the direction of the storefront, only to find that my flatmates were scoping out the place. Mere seconds later, my date walked in.

When he came up to me, I had to hold back the laughter. He looked like a damn penguin, and he walked like one too. He was wearing a white dress shirt with a black vest and slacks, and the guy waddled from side to side like a huge stick was up his ass. I think he thought we were going to get married or something.

To make matters worse, he was a ginger. A carrot-top. A RANGA.

The entire time we were talking, my eyes were searching for his soul. Luckily, it only takes a few drinks to get me talking up a storm, and I pretty much carried the conversation. When it was time to leave, he invited me to play pool, and when he pulled out roses that he had been hiding, I was too nice to refuse.

We played pool and ended up at his flat. I had no idea how I got to his flat, but when he started serenading me and things got weird, I made an excuse to leave. Before I made it out the door, he went in for the hug and kiss. He landed one, and I had to fight to keep my food down. He asked me if I just choose not to kiss people back, and I should have answered with “Nope. Just you, bro.”

He asked me for my number and when I hesitated, he just said never mind. I ran as fast as I could.

Suited up, I strolled into the early evening air determined to make this blind date stand out from those before me that had fallen flat. I arrived at the bar to find my match waiting for me. After our introductions, it became apparent that this girl was here on exchange. This made me think the date was going to go one of two ways: she was either here to experience the pleasure of a Kiwi man or here to just chat and make friends.

Although conversation flowed smoothly, it was a hard task trying to establish commonalities between us. It was a likely culture clash and was going to make this an uphill battle. She was keen on the idea of playing pool though, so after finishing our food and drink tab I suggested we headed off to a nearby bar for a few games.

Before leaving, I had the bartender (a GC) pass over a rose I’d stashed there earlier in the afternoon. Every girl likes being surprised on a date, so surely this was going to spark some emotion from her. I handed her the rose and she took it with what could only be described as the best poker face I’d ever seen. Fucking great.

After a couple of rounds of pool (I’ve seriously never seen anyone play so shit) we began walking back to my place. Once back at the flat, I took her to my bedroom and could still sense I was getting nowhere with her. It was time for the coup de grace. I picked up my guitar (conveniently located beside the bed) and serenaded her with a stunning rendition of “Give Me Love.” She stared at me blankly. Turned out she had no idea who Ed Sheeran is and had never heard any of his songs. Fucking great.

We shared a few kisses but it was obvious things weren’t going anywhere. She then wanted to head home, so I gave her directions to her flat and let her walk back out into the night. I tried my best Critic readers; I tried.
This article first appeared in Issue 4, 2014.
Posted 2:59pm Sunday 16th March 2014 by Lovebirds.