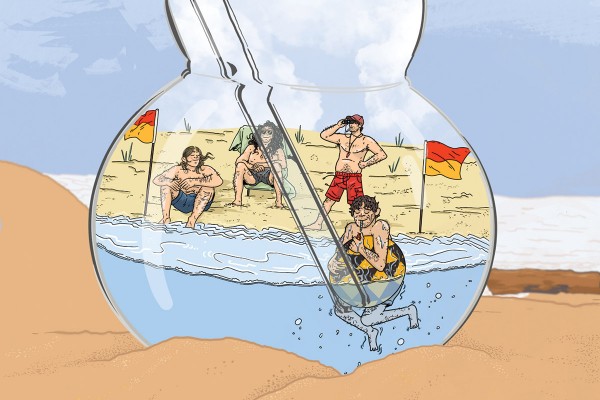 Pōneke-based Daniel Vernon is a man of many talents. He’s an artist, a podcaster, and is in a band. He writes and plays music in Dartz, makes political satire comics as yeehawtheboys, and talks about sex, love, and relationships on the Just The Tips podcast. Daniel took some time out of his busy schedule to talk to Critic Te Arohi about his creative process, Hairy Maclary, and bird-based conspiracy theories.

Daniel’s band Dartz are often described as party punk, but Daniel describes the band as “older brother rock”. Presumably that’s because it’s like dad rock but younger, cooler, and more likely to give you drugs to try. Daniel’s role in the band is to “write the lyrics and yell”. Their song ‘Bathsalts’ was shortlisted for a 2021 Silver Scroll Award, the most prestigious song-writing accolade in Aotearoa. Daniel described getting the nomination as “insane” and said that he was “pretty shocked” when they found out.  San Fran in Wellington is Daniel’s favourite venue, but he prefers playing house parties.

When asked how he balances playing in a band, making comics, and recording a podcast, Daniel replies “I don’t.” It involves a lot of late nights, and lots of blurring work life with social life. He describes making the Just The Tips podcast (with esteemed Critic alumnus Henessey Griffiths) as socializing. Touring with Dartz means he gets to travel with his best friends, so it’s fun and doesn’t feel like a burden. He says that even if juggling all of these roles is exhausting, “it’s all fun stuff, it’s all stuff I’ve wanted to do since I was a kid so it doesn’t really feel like a chore or anything.”

Daniel has come to a lot of realisations about personal things through his Just The Tips podcast, where him and Henessey talk about sex and relationships. Daniel reckons it makes for a good podcast as “people can listen to me learn and come to realisations about things through the podcast.” Two non-sexual things he’s learnt along the way are that you shouldn’t have your cell phone near microphones when recording “because it interferes with the mics so we’ve lost like three episodes because of that” and that he doesn’t like the sound of his own voice.

Daniel’s comics as @yeehawtheboys on Instagram are entertaining, informative, and political. While he’s talked at length about his creative process for making his comics on his SubStack newsletter, Daniel says that it usually involves him “trawling through the news websites to see what’s happening, otherwise it just comes to me, usually at the most inconvenient times, like when I’m trying to sleep”. He’ll then try to think of a good angle for a topic, and then briefly write up some notes before getting into drawing.

Daniel talks about striking a balance between serious and entertaining in many of the comics he makes. “I can tell the comics are less ‘funny’ when it’s something I’m really, really, really invested in. If they were all serious I don’t know if I could be doing this.” He reckons it is powerful to make something funny in order to show how ridiculous and idiotic it is.

“Lord of the Rings fucking sucks, make a live action Hairy Maclary you cowards” is arguably one of the best tweets from Daniel’s Twitter, so we asked him who he thought should voice Hairy Maclary in a hypothetical remake. Daniel thinks Bill Murray would be a good fit for the role. However pointed out that Murray’s already voiced Garfield before so he might not want to get back into the CGI animal business again, plus “I think he regrets it as well.” If Daniel were to voice one of the characters himself, he says he’d probably voice Scarface Claw, the cat, mostly because he’s “got that passive aggressive energy”.

When asked about any conspiracy theories he believes in, Daniel says that he believes that  something shady is going on Disk Den, the CD and record shop past the Octagon that is “stuck in 1992”. It’s unclear if Daniel believes it’s a front for a criminal conspiracy or it’s literally stuck in 1992 by some time travel paradox and/or curse. It does appear to be one of the last places selling tapes, which feels very retro sci-fi.

Daniel also reckons the Dunedin City Council is “made up of birds dressed up as people,” citing the similarities between Mayor Hawkins’ last name and the hawk. While a thorough investigation by Critic Te Arohi could not find any corroborating evidence for this claim, Councillor Rachel Elder’s last name is similar to the Eider, a type of duck, and Councillor Steve Walker’s name vaguely resembles Warbler. Very suspicious indeed.

Dartz play at Starters Bar on their ‘Toyota Corolla Tour’ with Hot Donnas, L. Hotel, and The Slinks on Friday September 10th at 7pm. Tickets can be bought at undertheradar.co.nz.