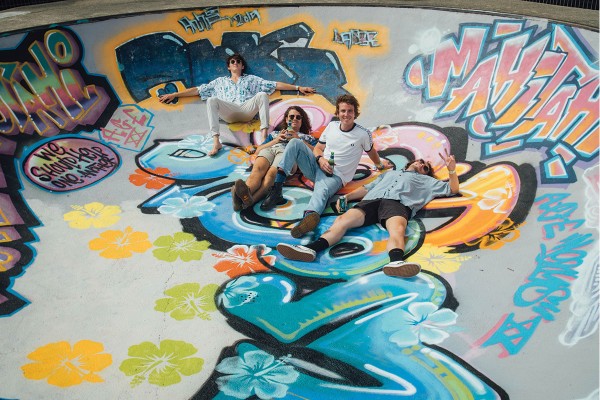 Mako Road: On their upcoming tour, the makings of ‘Stranger Days,’ and post-show rituals

Four-piece indie rock band Mako Road have been making festival headlines and blasting through radio airwaves across New Zealand for a couple of years now. Their debut album, ‘Stranger Days’, has just been released and the group is set to tour around New Zealand this month. Critic Te Arohi sat down to chat with lead guitarist Connor on the process of making the album, the band's aspirations for the future and his favourite post show ritual — Maccas.

Mako Road was a long time in the making, with all the members having previous musical experience prior to joining the band. “Individually, we all had some kind of musical experience, we had been doing live acoustic performances for a while. Like, our bass player was making hip hop and Robbie was in a rock group,” says Connor. The four found each other at University, and started jamming out together, mainly doing covers.

“We were just at Uni and we were playing covers at that point. But, we played Wagon Wheel one too many times and we were like screw this, let’s write our own tunes,” says Connor. Mako Road was formed at a time when other kiwi bands such as Six60 were finding great success, giving the boys the extra nudge they needed to see how far they could take things. “We had seen bands come out of Dunedin which had been getting pretty good measures of success, so we thought, we can do that too. We gave it a crack, and here we are.”

Mako Road has a distinctive, psychedelic, funky, and infectious sound which makes you feel like you’re in a festival crowd of thousands of people, even if you are just listening to them through headphones. For their creative process, Connor says they take a macro view of the process. “If there is something catchy or hooky that gives us a bunch of ideas, whoever came up with it tries to develop the idea, then they bring it to the rest of the group and we flesh it out. Sometimes lyrics and melody come together, we’re still young and learning. But it seems to be that everytime we sit down, it’s different.”

As for their debut album, Connor says the band is excited for its release. “It’s been sitting there for a while, so we have been releasing singles. We finished it last year, and we were like ‘let's release it now,” he says. Despite their enthusiasm, the band held off on a proper release in order to perfect the process. They’ve taken a new creative direction compared to their previous work. “We’ve built the artwork around it, and we’ve taken the visual thing a bit more seriously, so we have animation and one or two music videos which we’re really happy with.”

The group hid out in a remote Northland bach in Tūrangi to make the album, escaping from everyday life to immerse themselves in the creative journey. “It was so fun, we had a beautiful view of the lake. It was isolated so we could be loud,” says Connor. “There was also a spa pool, so we would have like three spas a day with a beer and a dart. It was luxurious,” he laughs. “It was important for us to get out of our normal living environment. You are more focused, and it’s more of a new experience.”

As for the sound, Connor says it’s a slight departure from what fans might be used to, as they’ve experimented with a different sound. “The album is more psychedelic, we’re really excited to hear what kind of response we get, and we’re lucky to be able to tour a place like New Zealand,” he says.

Although, the tour and album did have some setbacks due to Covid-19. Last year, the band was forced to pull the plug on a sold-out Australian and New Zealand tour. “It was gutting, we weren’t sure for how long [this would go on for]. There was so much uncertainty,” says Connor.

Then, New Zealand went into lockdown, presenting a variety of challenges. “We thought, maybe there will be a silver lining. We were forced to be at home, we were all locked in this house with the pressure that we’ve put on ourselves to write an album, and it didn’t really work out,” he says. Travel restrictions have continued to make touring niggly. “Lockdown sucked and it created so much uncertainty as to when we are going to get over to Australia, because you don’t want to tour too much in New Zealand or you'll become overplayed,” he says.

Despite setbacks, the group still has big aspirations for where they want to take things, and show no sign of slowing down. “We wanna take it as far as we can, we see ourselves working towards being an international festival band, it’s going to take a while, we’ve gotta do the grassroots first, on a much bigger scale in places like Europe and the US. Covid has put off that goal for a couple years, but we don’t want to be confined to any one space. We wanna play to so many crowds that have not heard our music before but still have a really good time,” he says. As for his favorite part about touring, Connor says it has to be the Maccas between shows.

Mako Road’s Debut Album ‘Stranger Days’ is now available on all streaming platforms. You can also catch them at Union Hall, Monday, August 23.