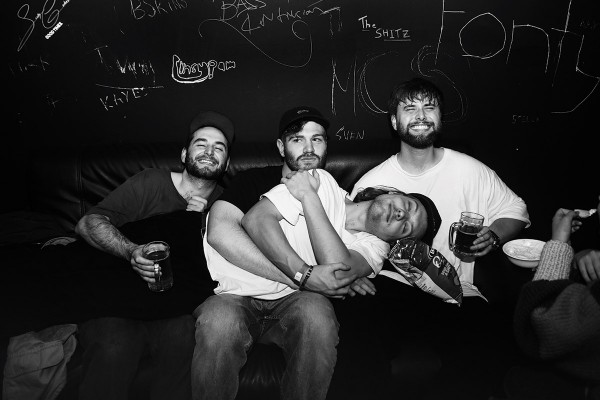 Rezzy Crooks are now one of the OG bands on the Dunedin scene well established by many a pint night. There are four members Sam, Jamie, Toby and Josh in a classic two guitar, bass, and drums set-up.  We checked in with them to see what it takes to make it to the top and stay there, and what they have planned for the future. Check them out on Facebook, Instagram, and Spotify @Rezzy Crooks.

Rezzy released their latest EP in June, titled Rezzy Crook Book. It’s a project they’ve been working on for about a year and a half. Toby says lockdown last year made them rethink the album “We more or less had everything recorded before lockdown and we decided we weren’t going to release it because we wanted to do a gig and then we were listening back to it and decided to redo everything.”

They recorded most of Rezzy Crook Book, in Sam’s bedroom. “We had to flip my bed every day to get the recording done. The drums were the hardest part — getting the right sound from them is super mathematical.” As the album evolved they eventually turned to Peter Molteno from 236 Studios for a more professional touch on the drums and mastering. Rezzy likes to keep a 50/50 mix of covers and originals in their live sets, but Sam says they’re never truly covers: “It’s like if we wrote the song, how it would sound.”

Because some band members are working full-time, the boys need to be disciplined to keep up momentum. Sam says “you really have to make an effort. We got together at the start of the year and made a whole lot of goals.” Lockdowns especially have been a challenge for Rezzy, with three of their pint night gigs being cancelled due to Level 2 restrictions. Many in the band believe it is a curse, says Toby. “We’ve got a gig in like two weeks so let’s hope that the Ministry of Health doesn’t find out.”

The name Rezzy Crook has been linked to the magical substance bong resin. “To be a Rezzy Crook you have to have at least smoked resin at least once,” says Jamie. But this practice is dwindling amongst the band members, Jamie says. “None of us really smoke too much of the wacky backy anymore. To get a good resin harvest you have to be a full time bong smoker.”  The meaning of the name depends on who they’re around, Toby says. “When my parents and my parents’ friends ask me what it means I just tell them Resident Crook.”

The band members are all Dunedin veterans. They have found that playing all of their gigs at venues is easier, Sam says. “We lived on Hyde Street in the old band, with Jamie and me, and we did 100s of flat gigs. Rezzy is more of a mature thing.” Jamie added “You have your good flat gigs, and your bad ones, but after a while, the bad just started to outweigh the good.”

However, they still do enjoy a few substances on stage, says Sam. “The best shows are definitely after you’ve had a few beers. I’ve been known to say some outrageous shit when I’m pretty cooked, always on the mic, like ‘if anyone has any rezzy to donate, come here and we’ll shelve it’.”

Rezzy are keen start recording a something new, Toby says. “We want to get back to the studio pretty quickly. We’ve got two songs basically done, and tonnes more almost done that we just need to finalise.” Jamie thinks a tour is on the cards. “It would be awesome. I would love go to each of our home towns, and show our few remaining high school mates what we’ve been up to while we’ve been missing down in Dunedin all these years.”