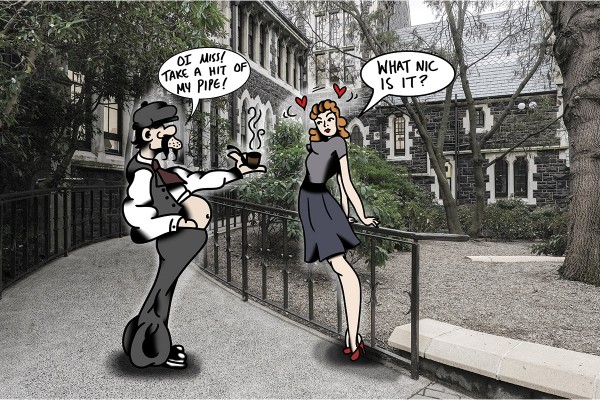 How Otago students got it on in the 19th century

The lads and lasses of Dunedin have a few tricks up their sleeves when it comes to dating and hookups. But how did students do it back in the day, before the technological lubrication of Tinder and Snapchat? Critic did a deep dive into old school dating, circa the 1800s, and here’s what we found.

The dating pool back in the 19th century was vastly different to what it is now. There was no such thing as a breatha or beezy.

Instead, due to the Otago Gold Rush, there were quite a few miners and farmers in Dunedin, as well as your standard office workers and pretentious law and med students. Alongside this, there was the brand-new Selwyn Theological College, and your choice of 26 different “houses of ill fame”, otherwise known as brothels. These were mostly concentrated around the present day Stafford Street area, then known as the ‘Devil’s Half Acre’. At the time, male homosexuality, or “buggery”, was punishable by death, which gave rise to an underground culture in the goldmines.

Because of the Gold Rush, North Dunedin was the richest and most populous region of the country. 86 Queen St wasn’t a student flat, but much rather an elaborate Great Gatsby type mansion, fitted with vases, fine china, and paintings. It was common to have “domestic help,” or people who worked as servants, in many homes at the time, which likely led to a wide range of unintended pregnancies.

How People Got Together

Unfortunately, carrier pigeon Tinder wasn’t a thing, so people had to do what this generation hates most — meeting in person. Fortunately, OUSA had been hosting events, like the Capping Carnival, to celebrate graduation, since 1890. The Capping Carnival had a reputation for disorderly behaviour, which got it banned for several years between 1894 and 1898. It also involved sextets. You could also choose to join various societies and social clubs throughout Dunedin, these hosted events such as balls, formal dinners, and other pompous events.

You could also expect to be well topped, with bonnets coming in all shapes, sizes and levels of floral arrangement. Ribbons, or simpler berets, bowler hats, and top hats were also common. There were no vintage hoodies or wide legged pants. Three-piece suits, with a pocket watch to match, and large puffy dresses that went down to the ankles were the norm. Exposed ankles were considered sexy, even risqué, at the time.

Rather than addressing each other as “horn”, “cunt”, or “breather”, the polite terms “madam”, “miss”, “sir” or “gentleman” were used by everyone.

Pickup lines included the likes of “would I have the privilege of accompanying you back home?”, “I love you”, “would you like to see how I explore the deep mines?”, or even “would you like to come and enjoy dinner at the Dunedin City Buffet?”. However, this last one turned out to be a brothel.

Contraception was also essential, as having an illegitimate child was frowned upon. Reusable condoms made from sheep guts, douching after sex, or pulling out were all common means of avoiding kids.

Contrary to popular belief, premarital sex was common. Many sex workers often left the profession to get married and start a family.