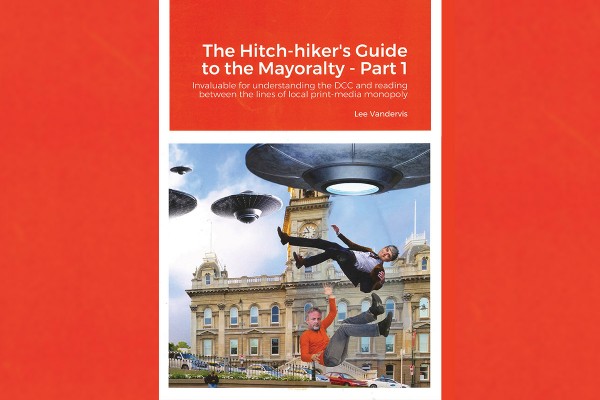 A Review of Lee Vandervis’s Book

DCC Councillor Lee Vandervis has recently released a “book” (his words). The full title is The Hitch-hikers Guide to the Mayoralty Part 1: Invaluable for understanding the DCC and reading between the lines of local print-media monopoly. The title is only a fraction of this truly bizarre pamphlet/dossier/magazine. I hesitate to call it a book.

The spectacular cover art, depicting Aaron Hawkins and Lee Vandervis being abducted by UFOs, is a striking introduction to the author.

Some context on Vandervis: Between managing to run for mayor eight times (unsuccessfully), he has become a city councillor. Aaron Hawkins is quoted as likening him to a “four-year-old”. In response to this, Vandervis wrote an entire book on Hawkins, based around a fictional conspiracy theory about local politicians, fear of cars, and bad analogies to cult science fiction texts.

Vandervis also has the dubious distinction of being perhaps the only fiscally conservative politician in the country to be slammed by the Taxpayer’s Union. In his most recent dispute with his own council he has cost them upwards of $42,000 by arguing over a $12 parking ticket.

“Councillors are egged on by the booming number of DCC bureaucrats known elsewhere in the Universe as Vogons, an alien species whose public cost grows cumulatively at an unsustainable rate of 8% per year,” Vandervis writes, in an attempt at a joke. The book revolves around a grand scheme led by alien creatures called Vogons, but also includes unsolicited advice from Vandervis and some pretty scandalous allegations.

I thought it was some sort of ridiculous satire from a jaded councilmember at first, but some of the allegations are pretty severe. Suggesting conspiracy among local MPs and council members seems like defamation fodder. I must give Vandervis some credit for calling the ODT “the Otago Denied Truth”, which sounds exactly like something someone who used to write for the ODT would say.

The political ideology Vandervis tries to talk about just makes him sound like more of a crackpot. He explains the “GREEN PARTY ORACLE” claims that South Dunedin will be “reclaimed by the sea” and they will also ban “our hoofed animals”. If he really is some kind of political saviour,  like certain denizens of Dunedin news seem to think, we know for a fact God has a sense of humour. Or Vogons. Whoever the fuck this book is about.

Aside from the general shenanigans going on in every aspect of this book, structurally, this shit reads like Geronimo Stilton. A collection of random capitalisations, obscure pictures, and glossaries in the middle of a page, and defining lingo you have never heard before all grace the poorly formatted pages of this tome. The amount of unsubstantiated claims being made would make turn any self-respecting statistician to cocaine for feelings again.

I know it sounds like I’m exaggerating, but I’m dead serious. The more I think about it the more of a fucking black hole this thing is.

The use of George Orwell’s term “group-think” along with a number of his poorly plagiarized ideas, paints a pretty good picture of Vandervis’s target audience: Vehicular transport enthusiasts with too much time on their hands, too much internet access, and little comprehension of the power of buzzwords. “Indoctrination”, “Vogon Investigator”, and “mongrel Mayor” are all frequently used in the book, and are a mere fraction of the material covered. L Ron Hubbard is going to get a new BFF when Vandervis finally drives his ute over the rainbow bridge.