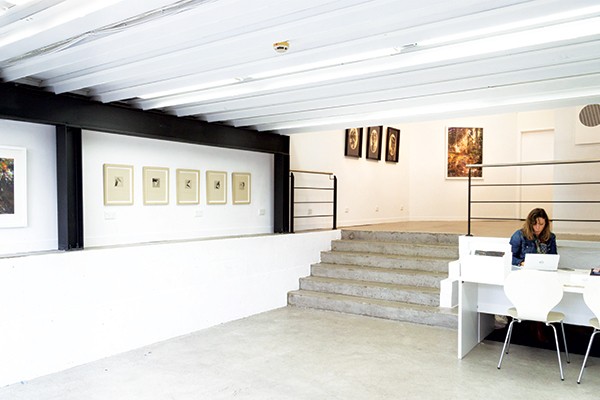 The art world, though it would deny it, has its own set of well-established hierarchies. It needs to look down on something and that something is print works, which is ironic given that Pop Art, one of the major revolutions in the history of art, employed printing techniques. Both Warhol and Rauschenberg were lauded for it by the art establishment.

In an attempt to challenge such archaic pecking orders, a group of five printmakers are currently exhibiting in Auckland.

Waikato based Carole Shepheard is one of those artists, showing a series of new works that enter the territory of abstraction. Her collaged forms, random shapes that float on an undifferentiated ground, juxtaposed and overlapping in places, present colours and textures that provide hints of things that spark and generate recollections. These delicate, luminous and layered forms, trace elements, represent memory fragments that collect in the mind over time and hover, sometimes with shades of melancholy, as past and present jostle for position.

Now living in Kawhia after years as an urbanite, Shepheard has become more open to nature and its changing moods, prompting an introspective exploration of forms that are simply allusive rather than denotative.

Prue MacDougall follows the nature theme. Her black and white portraits of women, heads layered in flowers and other flora reminded one in their compositional format of that early surrealist, Arcimboldo. The tondo format adds an old world feel to the imagery which places us in the terrain of the maypole and the goddess Flora, but the message is contemporary. Eco-Feminism is here pronounced.

Deborah Crowe does a similar collaged and layering effect to present her own ecological leitmotif. Dense foliage-like forms crowd her canvas and overlay hints of architectural shapes as if nature has invaded the city with vengeful overgrowth. The resultant textural images becomes an almost lush abstract expressionist palette.

In contrast, Christine Wylie’s photo prints have pared back the image to minimal abstract forms that present as 3D origami shapes, triangular configurations in black and white that remind one of Malevich and his pure suprematist paintings.

In a similar tradition, Steve Lovett and Amanda Wright have taken a leaf out of Bridget Riley’s Op Art painting oeuvre and presented toned down abstractions in black and white that use circular formations crisscrossed with grids of various kinds. These move and play with optical illusions as the geometrics are interrupted by shimmering shadows. Static and kinetic thus interweave in mesmerizing ways.

What this show demonstrates is that the print medium can match anything paint can deliver.