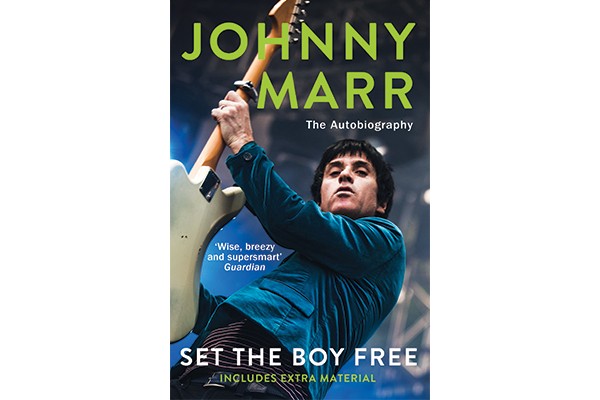 Back in November 2016, Johnny Marr, guitarist and cofounder of The Smiths, released his autobiography ‘Set the Boy Free’. It’s a book that spans his entire life, but of course focuses on how he came to knock on Morrissey’s door, and together change indie music.

Marr’s haircut alone launched a thousand bands, mostly terrible bands in ‘90s Manchester. In fact, it is surprising that there isn’t a whole chapter dedicated to his follicles; his rinse and comb method. And what’s with the title? ‘Set the Boy Free’. Who is the boy and why is he being held captive? You grew up in Moors-Murders era Manchester, what you on about Johnny?

If you’re a guitarist, or born in a certain time, or a fan of The Smiths, you will be aware of Marr’s technique and tone and know why he is so celebrated. What you’ll soon discover after reading this book is that Marr is quite boring. He’s the opposite of your usual ‘rock star’. He doesn’t drink or do drugs. He’s vegan. He’s been with the same girlfriend since he was 15. He taught Radiohead how to jog. He has a line of signature Fender guitars. The ones with extra buttons. He wears a lot of nice fitting, tailored suits. He especially likes the red buttons on a Paul Smith suit. He doesn’t have a bad word to say about anyone. These are all good things. But this book is the antithesis of a rock-memoir.

In some regards, ‘Set the Boy Free’ is on par with Alex James’s (Blur) ‘How to be smug about cheese’ memoir. They both have nice quiffs. They should both read Brix Smith Start’s ‘The Rise, The Fall, and The Rise’. Or, ironically, Morrissey’s book.

Underpinning the whole book is the question: will The Smiths ever reunite? The answer is “Sorry, I fell asleep when Marr joined Electronic”. All we know is that Marr and Morrissey shared some orange juice in a pub in 2015, and then radio silence. Do you really want them to reform?

Reformation Street is not often a fun locale.