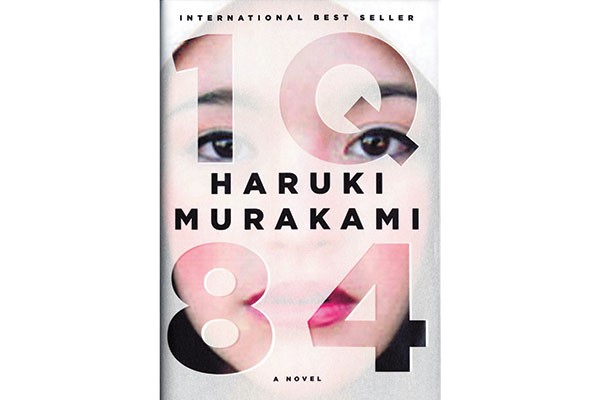 Murakami is known for writing more similar to a corporealized acid trip than contemporary fiction. In 1Q84 (one-q-eighty-four) surrealism and dystopia combine to fuel a fustercluck equal parts modern love and old-fashioned vengeance set against the backdrop of Tokyo. In maintaining the thematic precedent set by his previous works, supernatural and religious themes dominate what could otherwise be a dull Fifty Shades of Grey without the bondage.

Told via the perspective of two characters–Aomame and Tengo, and through three volumes framed by the seasons, the complexity of the book is easily overlooked in the escapism of the delicately intertwining plot of a female assassin and math-prodigy-turned-literary-fraud. Promiscuity and frigidity are juxtaposed as a mystical cult and Orwellian themes nestle in metafiction so Joycean your high school English teacher would make it an unfamiliar text practice exam.

Originally published in Japanese, and translated into English by individually accomplished authors Jay Rubin and Philip Gabriel, the novel finds its brilliance in concept rather than language. This is reflected in the classical music that frequents 1Q84, composers giving meaning to the abstract rather than lyrical. As the writer himself states: “It is not that the meaning cannot be explained. But there are certain meanings that are lost forever the moment they are explained in words.”

A book as metaphorical as Wes Anderson’s films are symmetrical, 1Q84 seems to change the way the reader views reality- just as the characters themselves begin to see two moons in Jovian hypnosis. Murakami examines the human condition through both the ridiculous and mundane. Hallucinogenic in its distortion of the ordinary, this is Chance the Rapper’s Acid Rap in literary form. Finding heavier relevance in a world facing the populist leadership of Trump, cultural relativist prose delivers a new 1984. Numerous characters feature within the connected storylines that serve as both protagonist and antagonist of their own fates, and the author captures their essence so well that the supporting characters hold their own as complex personalities.

If you are a bookworm, you will know the pain of finishing a truly great novel. Finishing 1Q84 was like the pain of saying goodbye to a friend who is graduating, but, as Aomame says, “I can bear any pain as long as it has meaning,” and this novel contains nothing if not meaning.