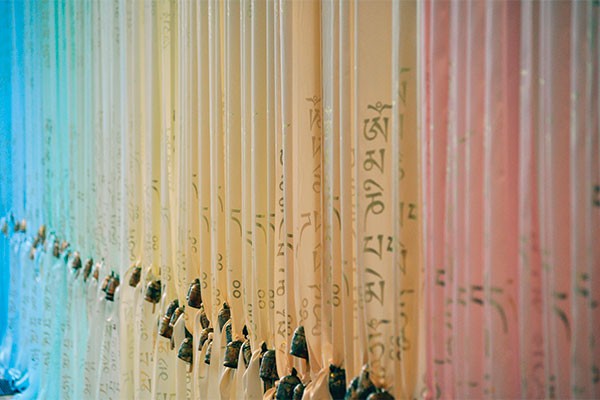 My first glimpse of this work was an unexpected one: while chatting with a friend in Nova. I was thoroughly preoccupied with my cappuccino and not ready to be introduced to my new favourite contemporary art piece, but there it was, unavoidable —OM MANI PADME HUM by Tiffany Singh, towering above us on the ‘Big Wall’ space of the Dunedin Public Art Gallery. Hundreds of pastel-coloured, shimmering ribbons stretched from ceiling to floor, looking like a mix between the prettiest piece of art I’d ever seen and an exploded preteen Tumblr blog. Beautiful and begging a closer look.

OM MANI is monumental, each ribbon printed with the Tibetan Buddhist mantra of the work’s title and tied around a bell near the base of the piece. The golden lettering subtly reflects the lighting from the gallery in a spectrum of iridescent illumination. These ribbons are far removed from those of the Buddhist temples they’re inspired by, their presence in the white-walled gallery seems to suggest an adaptation, a modernised version of traditional culture for present-day consumers of art.

And traditional culture is really what Singh is exploring here. Across her piece she drew on as varied a range of influences as: the shades of pastel in OM MANI, Eastern and Western spiritual beliefs, ancient cultures and Jungian psychology. In the piece, her partnership with rural communities in developing countries is signified through the rustic fair trade bells, which hang in contrast to the pristine fabric of the ribbons. The significance of the bells expands further, referencing the numerous Buddhist rituals and offerings in which bells are used. These references are supported by the colour palette, which might remind you of a candy store but really signifies the Terra Chakra, a grounding flow of energy, which is believed to connect us to the energies of the earth. Add to this mix the prayer mantra of OM MANI PADME HUM, symbolising the search for enlightenment in compassion, love and wisdom, and what we have is a window into an ancient cultural and spiritual practice, which extends far beyond the walls of the Dunedin Public Art Gallery. A recording of this mantra being sung allows viewers to enter the work on an audio level as well, adding an important dimension to our experience of Singh’s art.

This work is impeccably timed with its messages of cultural acceptance, compassion and understanding. We’re living in a mad time and it’s important to recognise artists making statements of this kind and to celebrate them. And it’s comforting, too, to know that, despite all the chaos, we have places like the Dunedin Public Art Gallery’s ‘Big Wall’, which has formed a small spot of rainbow pastel fair-trade culture in a wider world of conflict.

OM Mani Padme Hum is at the Dunedin Public Art Gallery until 31 March, 2017