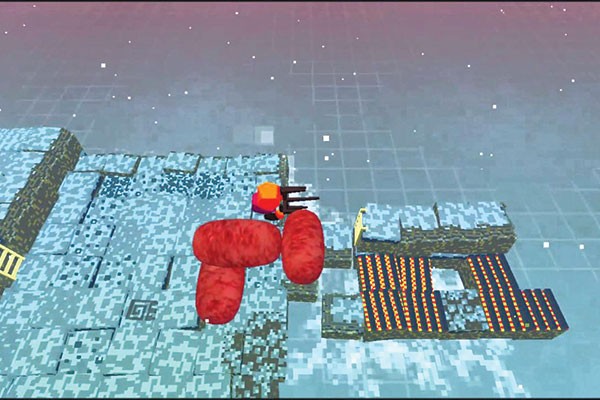 Board Game | Developed and Published by Increpare Games

Think of the most difficult puzzle game that you have ever played and multiply it by a thousand. Then take away all instructions, add a lot of frustration and headache-induced pain, and you will get a game that is still only half as infuriatingly difficult as Stephen’s Sausage Roll.

This game is the second commercial release by designer Stephen Lovell. He first came to prominence in 2011 with his quaint puzzle game English Country Tune, a very pleasant piece of minimalism about growing organic molecules that was easy to get into but very difficult to master. The main difference between that game and Stephen’s Sausage Roll is that it told you how to play it. Here there is no such kindness. Once you hit start – after looking through the ridiculous sing-song main menu that seems to make fun of you with how childish it is – the confusion begins immediately. Stephen’s Sausage Roll is hard. And I mean REALLY hard.

You are a tiny man on an island holding a massive sausage fork, surrounded by large pink blobs. You move around in a weird way, you swing your fork around wildly, and there are white shadows of yourself everywhere. That is all the help you get; there is nothing telling you how to move around, how to solve puzzles, what the puzzles are or even how to activate them. Once you figure out how to get to the actual puzzle part of the puzzle game, you still need to figure out what the goal is, and then the game’s absurdity is exposed: this is a puzzle game about cooking sausages.

Stephen’s Sausage Roll has been called “the Dark Souls of puzzle games”, and it’s not difficult to see why. This is a game that seems to take a mirthful joy in perplexing its players. Almost every single puzzle seems impossible when you first attempt it; then, slowly but surely, you make a few mistakes, you get better at the game, and you learn how the game’s mechanics can be utilised to solve puzzles. You can only play the game for short bursts at a time — otherwise, you will be stuck in a constant loop of determination, self-doubt and ragequitting. Other game mechanics are introduced in later puzzles, but again, the game does not tell you about them. You have to figure them out yourself. It was with infuriation rather than epiphany that I discovered that, yes, you can climb up ladders—but only sideways.

Believe it or not, there is something to be praised in this level of difficulty. Games as obfuscated as this can only be approached with patience, a clear head, and regular breaks to make sure you don’t go mad. Because you have to learn the mechanics yourself, you have to go through an extended process of trial and error, testing what works and what doesn’t, and developing your own strategy for approaching puzzles. Compare it to learning to swim by being thrown into the deep end  —you may drown, but if you manage to keep a clear head and teach yourself the basics, then you may become skilled enough to swim to safety, and feel more developed (and traumatised) for having had the experience. But this only goes so far. Once I reached the second island of puzzles in Stephen’s Sausage Roll, I plainly didn’t want to continue playing. It’s just too damn hard. The game is already exclusive by restricting its audience to the hardcore puzzle game crowd—the kinds of people who managed to complete Myst without a walkthrough—and THEN restricting it to those who have the patience to break down its walls of difficulty.

I recommend this game hesitantly. It is clever, challenging and genuinely well-made, but at the same time it is so annoying, so mocking, and so lacking in reward and a sense of direction that one wonders what the bloody point of playing it is. But if you have the patience and mental fortitude to tackle a game like this, then I wholeheartedly applaud your efforts (while hoping that you’re also putting your intelligence into something more productive). It can be very satisfying to finally, FINALLY complete a puzzle after so many hours of frustration. And all from doing something as banal as cooking sausages.