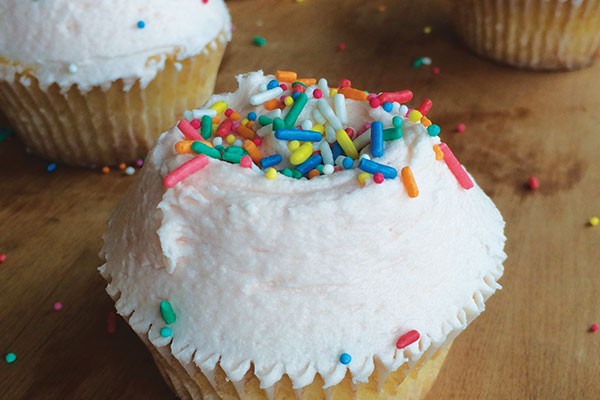 During my day at home being the world’s worst sick person, I not only managed to make a cake and a batch of meringues, clean the kitchen, vacuum the flat and write a blog post, I also whipped up some classic vanilla cupcakes for SPCA cupcake day.

While there are oodles of recipes out there involving complex flavours and toppings that provide more height than the cake itself, I feel like homage should be paid to the original classic. You can’t go wrong with a good vanilla cupcake. When the buttercream ratios are on point, the sweet, creamy and cloud-like experience is unbeatable.

The sponge recipe I use is from The Hummingbird Bakery Cookbook. The great thing about it is that the sponge uses almost no butter, so these are reasonably cheap to make. I remember in my second year of uni using the mini PCU containers of butter from the Carrington dining room to make these. With eight grams of butter per container, emptying the wee foil packets got a little tedious. While these cupcakes are low on the butter front, we shall ignore the fact that they contain an atrocious amount of sugar …

Oddly enough, this only makes nine cupcakes. They say 12 in the book, but I have never made more than 10. That’s fine though — nine is the perfect number to fit into my Tupperware.