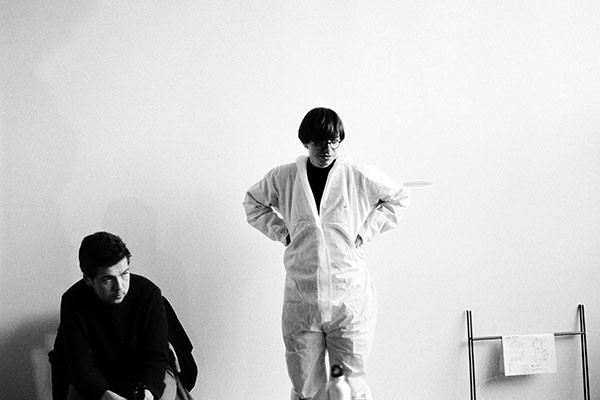 The theme of travel appropriately moves beyond the Dunedin Public Art Gallery down the road to the Alternative Space Gallery on Lower Stuart Street, where Alex Lovell-Smith’s … Travelling Alone, Sir … is currently on display. Alternative Space Gallery is an initiative where students, professors, fellows and friends of the Dunedin School of Art can display their art in the reception areas (upstairs and downstairs) of the Webb Farry law firm. The goal of the collaboration seems to be to create another public portal (open during normal business hours) into the art school from a central city location, while also providing artists with exposure to a varied audience who may not normally see their work.

Albeit in a slightly unusual place to seek out art, Lovell-Smith’s scanned 35mm film photos, interspersed with polaroids, transport the viewer into endless, foreign landscapes that sometimes invoke the loneliness of a solo traveller and at other times capture the bizarre details that only searching eyes can find. Although Lovell-Smith is based in Dunedin, his current show extends on a deeper theme of the photographer’s yearning for adventure, for discovering an exciting scene or a potential new project in an unfamiliar environment. He then brings these images back to Dunedin to share with and teach others and also inspire himself to go out and do it all again, because some projects are never finished.

Despite the mixed arrangement of the photographs, these fragments of Lovell-Smith’s travel in middle Europe, North Africa and Israel are separated into two projects. In one of the larger format photos, we see a young woman lounged on a bed, stretched back with her face carefully angled for a selfie taken on her cellphone. Another photo shows a woman surrounded by forest green ridges triumphantly … taking a selfie. These images document people’s prevalent use of cellphones, which threaten to slither in between them and the experience at any moment, as if their experience isn’t validated until the selfie is taken. Lovell-Smith’s discerning eye intermingles the picturesque with a dark humour that casts the habits of our times in an uncertain light.

The second project, consisting of polaroids made by a camera Lovell-Smith found in the Czech Republic, captures the quiet, hidden scenes a person stumbles across when they are free to seek — to find themselves or an artefact of a different world whose discovery expands their own.