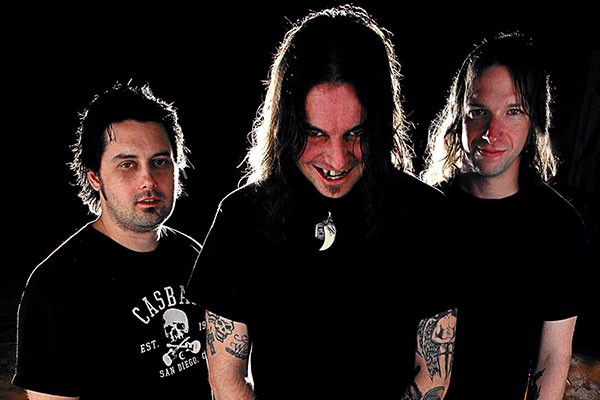 High On Fire is a heavy metal trio from Oakland, California. The band was formed in 1998 by Matt Pike, the once and future guitarist of pioneering doom metal group, Sleep. High On Fire has since earned itself a reputation for its genre-straddling style and vehement live shows. On its seventh LP, Luminiferous, High On Fire continues to splice thrash metal intensity with the crushing, bass-heavy nature of the stoner and sludge metal subgenres. Working once again with metal icon, Kurt Ballou, High On Fire is as pulverising here as any other metal band in 2015.

Luminiferous gets off to a bloodthirsty start with “The Black Plot”. The song hits the listener like a ten-tonne train, all infernal riffs and thundering percussion. The guttural voice of frontman is particularly striking, conjuring images of scorched earth and Viking raiders. Sound badass yet? Good.

After only the second song of nine, however, I could not help but feel a little apprehensive. High On Fire attempts to create a highlights reel of the last couple of decades of heavy metal music, taking the thrash tempos of Metallica and Slayer and shoehorning them into the ponderousness of sludge metal groups like The Melvins. On paper, this might sound like a fantastic idea. In practice, however, High On Fire’s approach is problematic. In taking the most extreme elements from multiple genres and slapping them together, High On Fire produces a dense sound that has zero nuance or dynamics. When listened to in its entirety, Luminferous is an endurance test. It is akin to a movie of nothing but action scenes, a meal of nothing but rich chocolate, or KFC’s Double Down burger. If Luminiferous were a book, it would be written entirely in capital letters.

If you’re looking for earth-shattering heaviness, then Luminiferous has that in spades. Every inch of the record (save for perhaps the sunbaked psychedelia of “The Cave”) is high-protein, brow-beating intensity. However, I would happily see half of that traded in for a little bit of diversity. I’m sure High On Fire fanatics will praise this record as “breathless” and “taking no prisoners”, but that is exactly my issue with it. All I ask for is just a few quiet segments in which I might regain my composure, quiet sections that will contrast with the explosions and make them feel like actual climaxes. Stylistically similar bands to High On Fire have utilised this loud-quiet-loud approach to stunning effect, even very recently: see Ufomammut’s Ecate, reviewed in Issue Nine of Critic this year, or Mastodon’s colourful return-to-form Once More ’Round the Sun from late last year.

Individual songs, such as the shredding title track or the Ambrose Bierce-referencing “Carcosa”, wield impressive arsenals of riffs and tempos. Taken on their own, these songs are perfectly enjoyable blasts of heavy metal. However, when experienced as a whole, Luminiferous is one big, indistinguishable, impenetrable wall of meat. With not enough variety within or between songs, it is with hesitation that I recommend Luminife.