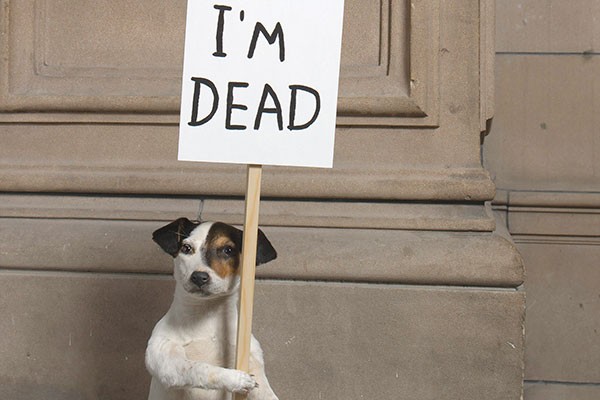 In symbolic flashes of red, white and blue, Private Utopia spreads across the first floor of the Dunedin Public Art Gallery, providing an extensive, in parts overwhelming, display of British contemporary art. Given its scale and diversity of subjects and form, wandering through the show involves encounters with conflicting themes — sometimes so contrasting that certain works seem to be linked only by their presence in the British Council Collection.

As accompanying text explains, five threads run through the displayed artists’ practices: “storytelling and narrative, humour and the uncanny in the everyday, real and imagined landscapes, identity and society, and the appropriation of styles, subjects and ready-made materials”. These threads tie together to create a “highly anticipated 20-year snapshot of contemporary British art”. The Dunedin Public Art Gallery is the only Australasian institution to exhibit Private Utopia, which makes the show that much more significant. While it is a lot to take in, by taking small steps and focusing on segments of the show (as the wall texts suggest you do), the experience becomes far more engaging.

Among the 80-plus artworks by 28 British artists is an enticing slither of works titled Myself/Yourself. The works in this segment of the show are by Tracy Emin, Sarah Lucas, Gary Hume (shown in another part of the gallery) and Haroon Mirza. Linked by questions of identity, these works explore the artists’ interpretation of the self. The qualities that make up identity are sometimes exaggerated or deliberately simplified (particularly in Hume’s works) and do not necessarily reflect the artists’ true selves but rather ideas of who and what they represent.

Hume’s works feature simplified forms, predominantly human figures, sometimes constructed with just two or three colours. Mirza’s combined sculptural, sound and video work features a string of red lights overfilling an open box, a figurine swirling on a turntable and a television depicting a man expertly and musically using his knives at a street-food stand. But it is the works of Lucas and Emin that, for me, are particularly striking by themselves and in their interaction with each other.

Sarah Lucas was born in London in 1962, and Tracy Emin was born one year later, also in London. The artists are connected not only by location but also by their friendship and explorations of the body as a central subject in much of their art. In 1993 they even made and sold work from a shop on Bethnal Green Road in East London together. Their connectedness and the power of their works when displayed together remind me too of the Hocken’s current show featuring works by Cilla McQueen and Joanna Margaret Paul.

Lucas’ work in this exhibition includes a selection of photos of her, often confrontational and twistedly humorous in her posing (facing the camera directly, legs spread, fried eggs covering her breasts) and a stuffed, sculpted nylon stocking, which is part of a larger collection of works called NUDS. Mere steps away from these works is a wonderful blanket work by Emin with bold, black stitching that resembles a sketch of the artist’s naked body. Her legs are splayed and a pile of coins pools between her legs. Neighbouring this work is a book made by Emin depicting images from the first thirteen years of her life. From the confrontational nature of splayed legs to the traces of the autobiographical or personal, Emin’s and Lucas’ work is evocative and relevant.