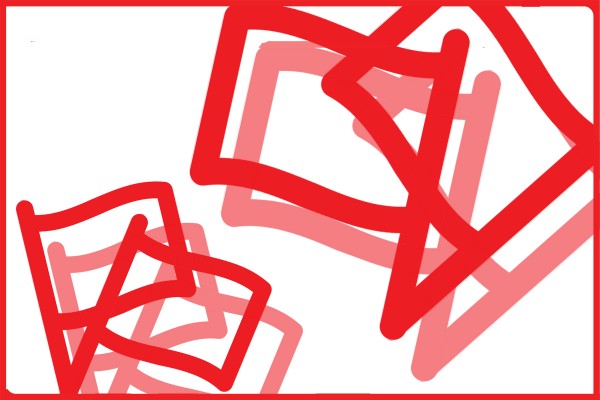 The start of every semester is always the start of a new beginning. New papers, new friends, new flats and new parties. It is also always the beginning of new romances. Perhaps you have a cute neighbour in your hall, or there’s someone you’ve got your eye on in a lecture (or Zoom call). Maybe you mixed and mingled with some singles during Flo and O, or you’ve managed to sustain somewhat decent conversation on Tinder. Whatever your situation may be, we have taken it upon ourselves to compile a list of Dunedin specific dating “red flags” for you to be aware of before you catch those feelings (or chlamydia).

They’re in your hall

This is a general PSA for freshers of any gender. Now look, I know this may be hard to hear. You’ve just moved into your hall away from mummy and daddy, and are excited by all the new company you are surrounded with. But I am telling you right now, don’t go after someone in your hall, especially in your friend group. Call me cynical or non-committal, but getting into a relationship from the get go at your college can really impact the year you have. Getting into something serious right away and only hanging out in each other's rooms can really impact the social aspect of being in a college. While the person themselves may not be a red flag, the situation might be.

There is no greater gaslighter than the Dunedin softboi. For those of you who are not familiar, allow me to explain. Softbois are what one may consider a “hipster”, but worse and more nauseating. They can generally be spotted by their outfits, which are usually a combination of thrifted Save Mart items and a few leftovers from their dead grandma's closet. By day they can be spotted sitting in Modaks drinking long blacks while writing a novel about how dark and depressing the world is. By night, they can be found lurking in the corners of Dive Bar watching a Marlin’s Dreaming concert while sipping on craft beer and mansplaining feminism. While the soft boi may at first seem like a charming intellectual who sympathises with the female experience, this will not last for long. It is only a matter of time before their true condescending and egotistical nature comes out. So, if you encounter someone you suspect may be a softboi, I can only suggest you disappear away into the haze of their ciggie smoke and run.

Alongside our Dive Bar softbois, including DSC eliminates both undesirable ends of the Dunedin dating spectrum, creating the ultimate, full circle red flag. On one hand, you’ve got the breathas at DSC, who are either horny freshers or second year breathas who don’t understand the concept of manners or consent. DSC is not romantic, charming or pleasant in any way. So, if you meet a guy at DSC, or one who asks you to hang out there, take that as a sign to run in the other direction. It’s cheap, nasty and sticky, just like the sex you’ll have after going there.

They do law (with honourable mention to politics or commerce)

Dating a law student is like dating that one teacher in primary school who, one day, decided to wake up and have beef with an eight-year-old for literally no fucking reason. Initially, their charm and charisma (which they will eventually use in a courtroom to advocate for Big Oil) will draw you in. You will think you are so cool, so special, because a law student has taken time out of their day to acknowledge your presence. However, the novelty wears off really quick. Soon, you will be subject to mixed messages, backhanded comments and arguments that they always seem to be able to get out of. They will never reply to your snapchats or signs of lust, because remember, they do law, and they don’t have time for a commoner. Instead, you will simply be discarded like their empty oat milk latte takeaway cups from Dispensary. People who major in politics or commerce also get an honourable mention, since they often embody the same characteristics of mansplaining, arguing and thinking they’re always right. However, they’re slightly less toxic and are more inclined to at least give you the time of day.

At this point, we should all be familiar with Taylor Swift’s 10 minute version of her hit break up ballad ‘All Too Well’, in which she brutally calls out Jake Gyllenhaal for being a gas lighting-scarf-stealing-piece of shit. However, it is highly likely you may come across some who “don’t get it” or want to hear “his side of the story”. If you catch an inkling of this, or anything of the sort, drop them right then and there. Chances are, if they can’t see what Jake did wrong, then they will do exactly what Jake did to Taylor. Do you really want to get lost in translation, and feel like you’ve asked for too much? Do you want to be crumpled up on the floor like a piece of paper, lying there? Do you want to be broken like a promise? The answer is no, you don’t. The even bigger red flag is if your sneaky link thinks “Taylor Swift is lame” or “stupid”. Shut up, hating Taylor Swift doesn’t make you cool, it just makes you a misogynist douchebag who needs to get with the times.

There’s absolutely nothing wrong with Taylor Swift and if you are immature enough to think that there is, then that’s a red flag in and of itself. But when it takes someone longer to explain what Jake did wrong than it takes to actually listen to the entire 10-minute song, then you may be in for a bit more than you bargained for. It’s the same reason your first dates always disappear after you give them a 10-minute schpiel on the lore of Warhammer 40k, even if the subject matter is intensely important and reflective of today's modern political discourse. There’s just something about that intense obsession with justice, and the compulsive need to launch into a rant about it within minutes of meeting someone, that may suggest that this person will be too hot to handle.

They have dozens of houseplants but none of them are thriving

This one’s pretty straightforward. Houseplants are great, and the feeling of nurturing one to its full potential is an emotional high that can last for years. Having a green thumb is a green flag. But the corollary is a major no-go. There is a specific type of person that buys up these plants with an “I can fix you” attitude, and then proceeds to put in absolutely none of the work required to fix them. When the plant inevitably dies, this person just moves on to the next stray, bringing them into a room already crowded with the corpses of their fallen comrades. Now, this is a pretty direct metaphor. You want to avoid anyone whose habits fit the narrative of wanting to bring in strays, wanting to fix them because they’re so special, and then completely lacking the follow-through to do that. When considering a hookup, remember: always check the houseplants.

They have heaps of too-large hoodies

Think of this as a graveyard. It’s a collection of fallen breathas, much like Medusa’s garden. A quick inspection is a good idea, though, because all may not be as bad as it seems: those hoodies could be from her older brothers, or they could just be her style and she actually bought them. But do a quick reccie. Are there different names on all the tags? Different smells, stains or otherwise differentiating features? If so, grab your jumper and run. The last thing you want to do is to fall victim to a hoodie collector and be spat back out as soon as you relinquish your prized jumper in a gesture of romantic interest.

Now, there’s nothing technically wrong with Americans. And they aren’t in short supply, either. But in the late 1900’s something went wrong in the United States, and it’s a problem that persists to this day: circumcision. Now, nobody knows exactly why American parents thought this was such a great idea, but the result was generations of American men with greatly reduced sensitivity. Now, fellas, this might mean that your American beezy may be unfamiliar with the nature of a hood, and may be used to a little extra elbow grease to get things going. But for those lucky enough to escape the genital-mutilation craze that swept the world in the late twentieth century, the sexual tactics of an American girl may be too much for your little guy to handle. Best to avoid unless you want to risk tearing that banjo string.

They keep comparing you to their ex

Again, this isn’t gender-specific, it’s a catchall. If ANYONE can’t think or talk about you in terms that go beyond their last relationship, it’s time to gap it. This means that they’re not actually into you, they’re just into the idea of getting back at (or staying relevant to) someone else. You don’t wanna be a part of that. Besides, who wants to have pillow talk about some past romantic interest? Absolutely fucking no-one, that’s who. If you find that the only compliments you’re getting are “Oh, you’re so much sweeter than my ex,” it’s time to leave the table. Cheque please!