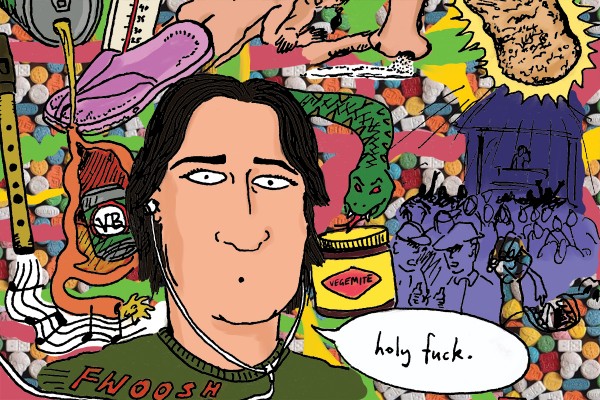 Last year I published a scathing opinion piece about how we need to stop playing so much drum and bass music and why the genre is inherently shit. The article copped a lot of hate and elicited an angry response from Dunedin’s breatha population, but it went on to win an award, so suck on that. I was subject to ruthless Facebook comments about how “fucking stupid” my opinion was, how I didn’t have taste, and that I thought I was too hot for DnB and needed to get my head out of my arse. However, I must admit, over the past few weeks my feelings have changed. What sparked that change? Nothing else but Luude's DnB remix of “Down Under”, the iconic Australian anthem by Men At Work.

Like most people, I first discovered this song on Tik Tok on a feed filled with white girls dancing in bikinis. From the 20 second snippet, I thought to myself, “This isn’t too bad, it’s kinda catchy,” (the dance on the other hand is super cringe please stop). A few days later I had a friend come over for drinks. I asked her if she had any song requests, and she responded with “You know, I kinda love that Luude song from Tik Tok.” With some reluctance, I played it. And holy shit, I had a spiritual awakening.

From the first sound of that stupid fucking whistle, my brains were blowing out of my head. I hadn’t felt this alive in a long time. Then the beat dropped, and the chorus hit. I felt a rush of serotonin surge through my body. It felt like the first line of gear the morning of Hyde Street, or the burning sensation of a tequila shot going down your throat. It felt like the innocent bliss of being a fresher, the sweaty mosh of a Castle Street party, and the warm fuzzy feeling of beer sitting in your stomach after Crate Day. All at once. It felt like getting an extra chicken nugget in your McDonald’s hunger buster, it felt like an orgasm I didn’t have to fake after mediocre sex. It made me feel, dare I say it, like I wanted to be Australian. Fuck Marmite and Bill English, I’m now team Vegemite and ScoMo.

It made me feel the urge to wear my “thongs” to the “servo” while being fearless in the presence of tarantulas and deadly snakes that could kill me at any given moment. It gave me the urge to steal pavlova, bake in 45 degree heat in the middle of summer, deport tennis players and have the most nauseating accent in the world.

This is what I mean when I say we don’t need to banish drum and bass, we just need to make it better. I say we remix more old school hits and certified bangers into DnB. Make it something you can sing along and dance to, not something that drones on and on while you have to scream to hold a conversation, or just stand there listening to, bobbing your head while chewing your jaw off.

So breathas, DJs and the like, I would love you to take a page out of Luude’s book. Remix some genuinely good, popular songs with your drum and bass, spice it up from just the same 20 minutes of “grrrrrrdooofdoofwahhhhh” that is usually heard around this town. I get it, I’m probably putting myself in yet another position to be crucified for my opinion. But in a land as fine and free as Australia, I’m entitled to say whatever the fuck I want. So suck on that, breatha.